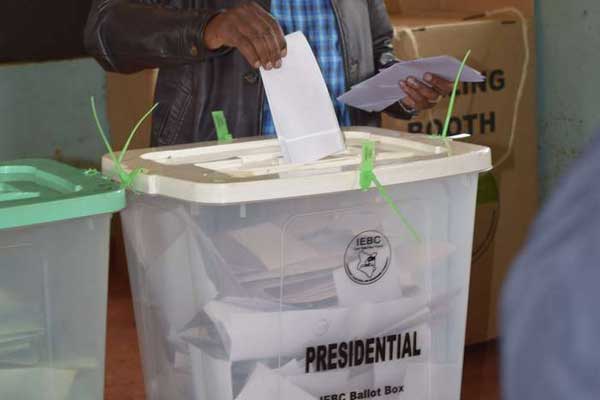 The electoral commission has released a revised timetable with leading to the October 17 repeat presidential election in compliance with the Supreme Court judgment.

AGENTS
IEBC chairman Wafula Chebukati, while releasing the timetable, said the commission had submitted to the National Treasury a draft budget for consideration and called on those concerned to expeditiously allocate funds to allow for implementation for key tasks ahead, especially those related to ICT and training.

“It is crucial for candidates to deploy experienced and committed agents to all parts of the country to enhance accountability and transparency during the electoral process,” Mr Chebukati said in a statement.

He said the initial observation from the bungled August 8 elections had revealed that political parties did not coordinate the deployment of their agents and in some locations there were none.

RETURNING OFFICERS
He urged the candidates to ensure their agents are well versed in technology and to finalise the list of those who will represent them in the polling stations, constituency and the national tallying centre and submit the same to the respective offices before October 3.

The commission has already recruited the 290 constituency returning officers and their deputies, a process that ended on Friday and that they have until Tuesday to sign the code of conduct.

There will be a review of polling stations and tallying centres from September 13 to 18 before they are gazetted on September 19.

Under the law, the presidential results announced at the constituency by the returning officers are final and cannot be altered by the commission.

Mr Chebukati said those to be recruited will be drawn from the commission’s existing database of applicants, excluding those that may have committed irregularities during the August 8 election.

Other staff to be recruited during the period include 135,038 clerks, 580 ICT support, and 290 constituency logistics assistants.

SUPREME COURT
The revised regulations must be gazetted by September 29, while the revised results management framework must be in place before September 20, according to the timetable.

The management of the election results, particularly the transmission, was a key source of contention between Nasa and Jubilee during the hearing of the presidential petition that culminated in the nullification of the President Uhuru Kenyatta’s re-election by the Supreme Court.

In their brief judgment, the judges who delivered the majority decision faulted the commission pointing out that it had committed irregularities and illegalities in the transmission of presidential results, details of which will be laid out in the detailed and reasoned judgment of the court to be delivered in the next one week.

POLL OBSERVERS
Accreditation of observers, both domestic and international started Friday and will run through the next eight days, until September 17.

Nasa has been at loggerheads with international election observers over their view that the August 8 presidential election was credible.

The timetable further provides that both Mr Kenyatta and Mr Odinga, the only contestants, have eight days to sign and submit their code conduct to the commission, while voter education will start on September 18 and go all the way to October 15, just two days before the poll.

VOTER EDUCATION
In the August 8 election, there was a high number of spoilt votes, raising questions about whether IEBC had carried out sufficient voter education.

The commission has further set aside 24 days to train staff on the use of Kenya Integrated Election Management systems (Kiems).

Mr Odinga has accused the observers of concentrating on voting and tallying but not the transmission of the results, faulting former US Secretary of State John Kerry and other observers of legitimising a flawed process.

“I think that the observers have not helped Kenyans resolve this dispute.

“They have confounded it by giving basically an approval to a flawed process and therefore I am very disappointed with John Kerry and the other observers,” Mr Odinga told the CNN soon after Mr Kenyatta had been declared president.