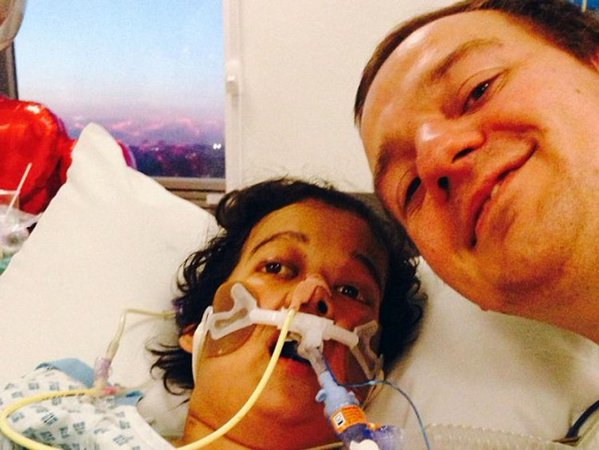 Serena’s cancer was diagnosed after she ballooned from a size 12 to 18 overnight. Tests revealed she had a watermelon-sized tumour on an ovary. Photo/DAILY MAIL

A cancer patient who married her fiancée from her hospital bed after fearing she had just days to live has stunned doctors by making a remarkable recovery.

Sereena Scott, 32, was devastated when a huge watermelon-sized lump on her stomach was diagnosed as ovarian cancer.

The sales assistant, from Kent, had gone from a size 12 to 18 overnight, causing her to look heavily pregnant.

Doctors warned the cancer was aggressive and she became so ill that one of her lungs collapsed.

Terrified her life was hanging in the balance, she feared her wedding to fiancé, Robert, 37, would never happen.

The pair had been engaged since 2005 but had been saving in order to have their dream wedding.

While Sereena was being pumped with chemotherapy, hospital staff agreed to let the couple hold the ceremony on the ward just days later.

Recalling her ordeal, she said: “I asked the doctors if I was going to die and no one could answer the question.

“I didn’t need them to tell me – I could feel my body failing and I knew the end was near – but I was hoping for reassurance.

“I also knew I was too young to die – but I couldn’t express any of this because by this point, I had a tube fitted in my throat to help me breathe”.

Desperate, she communicated with Robert by writing things down.

I was granted my dying wish as my body was showing no signs of improvement and I was desperate to become Roberts wife.

“He was my rock and did his best to keep my spirits high”.

“My heart was racing, – was so excited that he was about to become my husband,’ she said.

“I even found the strength to put my thumbs up afterwards – I couldn’t have been happier to become Mrs Scott. I never imagined it would symbolise the start of a new chapter, we all thought I was about to die”.

Despite her grave fears, Sereena’s health dramatically transformed after the wedding – and she is now in remission.

Five months ago, the couple renewed their vows to symbolise the start of their future together.

Sereena recalled: ‘After the ceremony, everything improved – the chemotherapy was working and the tumour on my ovaries was shrinking.’

And after recovering from the pneumonia that caused her collapsed lung, she was able to undergo surgery to remove the tumour.

‘I turned to the doctor afterwards and asked, “so am I not dying now?”. it was a real shock that things were finally looking up for me.

‘We had just had our deathbed wedding but I was no longer going to die – I had been given another chance at life.

‘I was allowed home a few weeks later and that’s when we decided to book to have our vows renewed. ‘

The second ceremony took place on October 10 last year – just one day after the couple’s wedding the year before.

‘I was just as excited for this one as I was for the first, said Sereena. ‘And this time I was able to actually say my vows and walk up the aisle.’

She now has check-ups every three months to detect if the cancer has returned.

She added: ‘I feel like the luckiest person alive to have beaten cancer when I was so close to dying.

‘I can’t wait to start my future with Robert and we are hoping to adopt a child in the near future.’

Serena’s cancer was diagnosed after she ballooned from a size 12 to 18 overnight. Tests revealed she had a watermelon-sized tumour on an ovary. Photo/DAILY MAIL Cancer patient granted a ‘deathbed’ wedding A cancer patient who married her fiancée from her hospital bed after fearing she had just days to live has stunned doctors by