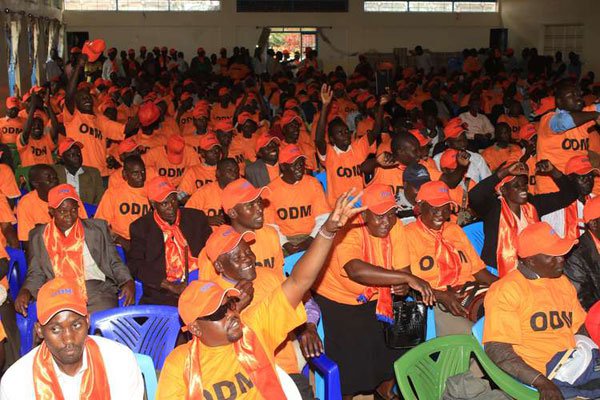 Supporters of the Orange Democratic Movement in Kisii on August 1, 2016. The campaign season has brought brisk business for printers of T-shirts, caps and scarfs. PHOTO | BENSON MOMANYI | NATION MEDIA GROUP

Millions of shillings are exchanging hands every day as politicians traverse the country in search of votes.

From the owners of helicopters and light aircraft to the village motorcycle riders, commonly known as boda boda, business people are making a killing as the campaign season starts ahead of the August 8 General Election.

Gad Kamau, the chairman of Wilson Airport Aircraft Operators, estimated that as many as 40 choppers are being hired by politicians each day to traverse the country, translating into hundreds of millions of shillings for the operators and aircraft owners.

While leading politicians like Coalition for Reforms and Democracy (Cord) leader Raila Odinga, his Amani National Congress counterpart Musalia Mudavadi, Wiper leader Kalonzo Musyoka and Deputy President William Ruto are said to be using their personal choppers during the campaigns, many more politicians have hired and branded aircraft to ease their movement across the country.

“There are at least 40 choppers flying politicians around at any given time,” said Capt Kamau, explaining that the number does not include tens of others privately owned by politicians.

Depending on passenger capacity and organisation, it costs between Sh150,000 and Sh200,000 to hire a chopper per hour. The orders are overwhelming.

Wilson Airport showed us different price ranges: a Eurocopter AS350 Écureuil, which carries six passengers, for instance, fetches Sh176,800 per hour and a seven-passenger Eurocopter of the same series goes for Sh187,200 for the same duration.

According to sources at the airport, politicians’ penchant for foreign pilots serves to further drive up the cost because such pilots are paid as expatriates.

One of these Kenyans reaping handsome returns from the campaign boon is Mr Jack Oim from Nairobi’s Komarock ward, who heads a group of about 50 youths offering protection to politicians and crowd control services in rallies at a fee.

He told the Nation that his business usually peaks during campaign time.

“The guiding principle is that our clients, who are politicians, may not always say the truth. With that in mind, you must ensure they pay upfront or else you will burn your fingers,” he says.

Already, Mr Oim’s team is involved in renting crowds out to politicians for which they make as much as Sh100,000 on a good day. Crowd size is such a big deal in political competition as it is seen as a barometer for measuring one’s popularity especially when the crowds appear in the media.

Saying that their rates depend on the profile of the seat an aspirant is contesting, Mr Oim says they are readying themselves to serve clients beyond Nairobi as proper campaigns start.

“What we charge varies. What an aspirant for the governor’s seat will pay is of course different from what we take from an aspiring MCA. Presidential hopefuls naturally pay more though they are difficult to come by,” he says.

Also in big money are those renting out public address systems and motor vehicles. Deejays and music groups are similarly making a fortune to entertain while designers are getting overwhelming orders.

Calendars and other printed works with politicians’ portraits are already in circulation. It is brisk business for printers doing T-shirts, caps and scarfs.

Boda boda operators have also discovered another way of making money other than ferrying passengers. They are being hired to escort politicians like witnessed last week when Kisumu Central MP Ken Obura ran into a hostile crowd in Kondele slums in the lakeside city.

There are those engaged in videography, recording politicians in public rallies for future use and also sharing with the press for mass circulation. Many are the social media pages run by individuals contracted by the aspirants to keep their supporters updated on every aspect of campaigns.

Those with a huge following in the blogosphere have also inked lucrative deals to help politicians campaign online.

Popular bloggers, many of whom started off as neutral, are today either posting on Facebook and Twitter for Jubilee or the opposition, having been put on retainers.

Mr Joseph Mwangi, a shopkeeper in Dagoretti, Nairobi, is upbeat about the campaign season. “Politicians have a habit of stashing away money. Some of this being ill-gotten money from public coffers but when elections approach, they bring the cash back. This is the time businesses thrive. I am hoping for a larger stock turnover,” he said.

Financial experts are warning politicians against dipping their fingers into family savings to finance their campaigns.

Career coach Alex Musau, who is the chief executive officer of Esquire Consultants, advises caution during this period.

“You must have a war chest purposely for the campaigns without eating into family savings. Have a pension plan otherwise the campaigns may drain all your savings, leaving you high and dry,” he says.

Last year, the Independent Electoral and Boundaries Commission capped campaign financing, limiting the amount of money aspirants for various seats can spend during the campaigns. It remains to be seen how the commission plans to enforce the rules.

The Centre for Governance and Development estimated that in the last election, the main presidential candidates, Uhuru Kenyatta, Mr Odinga and Mr Mudavadi, spent between Sh10 billion and Sh20 billion each.

Business people making a killing as campaigns start Reviewed by samrack on January 28, 2017 .

Share thisFacebookTwitterPinterestEmailWhatsAppSupporters of the Orange Democratic Movement in Kisii on August 1, 2016. The campaign season has brought brisk business for printers of T-shirts, caps and scarfs. PHOTO | BENSON MOMANYI | NATION MEDIA GROUP Business people making a killing as campaigns start Millions of shillings are exchanging hands every day as politicians traverse the