African Union to hold election to determine next chairperson 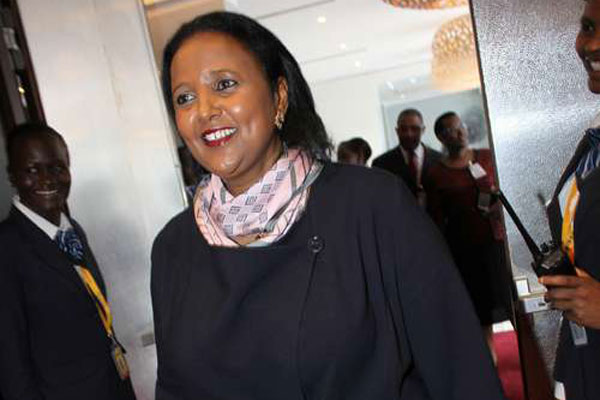 African Union to hold election to determine next chairperson

The African Union will on Monday hold an election in Addis Ababa, Ethiopia to determine its next chairperson.

It is a race that began nearly a year ago and this will be a repeat election after candidates failed to win adequate votes in Kigali, Rwanda, last year.

Kenya’s Foreign Affairs Cabinet Secretary Amina Mohamed is in the running to succeed South Africa’s Nkosazana Dlamini-Zuma as the chairperson of the African Union Commission (AUC). She is the only candidate from the eastern Africa region.

If she lands the post, she will be the first person from the region to head the AU secretariat since it was established in 2002 and only the second East African chair in the history of the pan-African body initially known as the Organisation of African Unity (OAU).

Mr Salim Ahmed Salim of Tanzania was the Secretary-General (equivalent to the chairperson of the AUC) of the OAU from 1989 to 2001.

Dr Moitoi, the current Foreign Minister of Botswana won the Kigali poll in July, but failed to garner two-thirds of votes cast.

Mr Mokuy and Uganda’s Specioza Kazibwe were the other candidates in that election. The Ugandan later withdrew from the race.

Normally, the chairperson of the AUC is the Chief Executive Officer of the African Union.

The chairperson is the chief accountant of the bloc and acts as the spokesperson of the organisation in relating with other bodies like the United Nations.

So how do they get elected? By law, candidates must have filed their notice of candidature at least three months before the due date. In this case, all the five registered their applications before October 30 last year.

The idea is for the AU secretariat based in Addis Ababa to circulate their names among member states. It acts as a pitch for the candidates who must then campaign across the member states, seeking as much support as possible.

The AU will also be electing eight commissioners who will be departmental heads of various sectors of the AU.

These are elected by foreign ministers of member states, known as the AU Executive Council, before they are endorsed by the Assembly of heads of state and government. Here, the candidates and their representatives lobby for support and make compromises or trade-offs.

Each of the candidates has been targeting at least 11 votes in the first round of voting.

The person who gets the least votes in the first round must drop of the race and this has a bearing on the swing vote in round two of voting.

This means that long before voting day on Monday, all the candidates can gauge their strength. Some may even pull out before the ballot is cast.

According to Rule 38 of the Rules of Procedure, all AU elections must be done by secret ballot; the exception is in electing the ceremonial chairperson of the Assembly where consensus is used.

The heads of state and government or their verified representatives cast a vote each.

This privilege is not available to member states under sanctions for coming to power via coup, refusing to service membership dues or declining to abide by previous substantial AU decisions.

There can be several rounds of voting until the winner is found.

In the last election, Jean Ping of Gabon and Dr Dlamini-Zuma battled for three rounds of voting.

If the third round remains inconclusive, the subsequent election is restricted to the best two candidates. This creates further swing votes. These two can then battle for three more rounds. If no one gets majority votes here, the losing candidate is compelled to withdraw from the race.

But the commission can postpone elections to another day. The Assembly will also appoint eight commissioners elected by the Executive Council based on “geographical distribution,” according to the Rules of Procedure.

This means that regions; east, west, central, south and north, which produce chairperson or deputy chairperson can only have one commissioner each. The rest can have two, but the chairperson and the deputy cannot come from the same region.

In this race, various candidates are vying to be deputy chairperson. They include Djibouti’s Interior Minister Yacin Elmi Bouh who will battle it out with Thomas Kwesi Quartey from Ghana, Mr Claude Joachim Tiker from the Democratic Republic of Congo and Abdulhakim Rajab Elwaer of Libya.

Algeria’s Smail Chergui is seeking to defend his seat as Commissioner for Peace and Security.

But the Algerian is facing competition from Burundi’s Ephiphanie Kabushemeye who currently serves as the African Union Mission to Somalia civilian Chief of Staff.

Other candidates include Mr Geoffrey L Mvla and Ms Rose Tujilane Chizumila (who are both Malawians), Ms Fatima Kyari Mohammed of Nigeria and Ms Diye Ba of Mauritania, a former minister.

Meanwhile, President Uhuru Kenyatta on Saturday chaired the 26th African Peer Review Mechanism (APRM) Forum where he said Africa should take pride in the progress it has achieved in promoting good governance.

The President said despite the existing challenges, there was so much to celebrate in terms of improved governance and rapid development especially in countries that are participating in the APRM forum.

He cited the mega infrastructure projects going on in different parts of the continent as one of the easiest routes to Africa’s integration.

“Various APRM member states continue to implement mega infrastructural projects with a regional and even continental dimension. These programs are a critical part of our regional integration agenda,” said the President when he opened the APRM forum at the African Union Headquarters in Addis Ababa, Ethiopia. The President fingered the Lamu Port South Sudan and Ethiopia Transport corridor, which when completed will link up to West Africa’s Douala–Lagos–Cotonou–Abidjan Corridor, running through Cameroon, Nigeria, Benin, Togo, Ghana and Côte d’Ivoire respectively.

African Union to hold election to determine next chairperson Reviewed by samrack on January 28, 2017 .

Amina Mohamed, the Cabinet Secretary for Foreign Affairs and International Trade, at Radisson Blu Hotel, Nairobi on May 6, 2016 for the 4th Retreat of the African Union Executive Council. PHOTO | ANTHONY OMUYA | NATION MEDIA GROUP African Union to hold election to determine next chairperson The African Union will on Monday hold an