Branch International Kenya is seeking to raise Ksh500 million through a six-month commercial paper as it accelerates its move to start offering virtual banking services through its online platform.

This will be the online lender’s third issue in the country after successful issuances of Ksh200 million and Ksh350 million six-month notes.

“In the journey to a fully fledged bank offering the full suite of bank products (including payments and current accounts), Branch has chosen to begin with AI-powered lending, leveraging new data points in innovative ways to screen potential borrowers,” read the Investor Teaser issued by Branch.

Virtual banking enables IT-based firms to offer deposit and withdrawal facilities, and other banking services, through automated teller machines or other devices, without having brick and mortar walk-in premises.

To date, Branch has raised Ksh6 billion capital. Its core investors include Andreessen Horowitz, an American venture capital firm with $4 billion in assets under management and a track record of investing in such startups as Facebook, Twitter, Skype and AirBnB, and the IFC, the private investment arm of the World Bank. 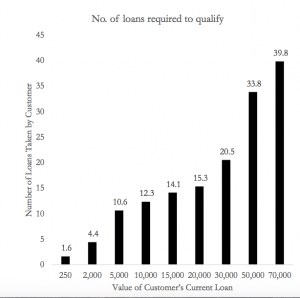 Since it started its operations in the country, Branch Kenya has signed up over 3.4 million users to whom it has disbursed in excess of Ksh19 billion.

“This growth has been driven by the relative ease with which users can sign up, have their KYC verified and get rated for credit. By leveraging on M-pesa, Branch allows customers to borrow, receive their funds virtually instantly and make repayments via the same channel,” said the firm.

Apart from raising Ksh3.2 billion in equity, Branch has also managed to secure over Ksh2.8 billion in debt funding from a combination of local and international investors.

It has an average of 7.93 per cent default rate, which is below the commercial bank average non-performing loans of 12.3 per cent in every week of the financial year. 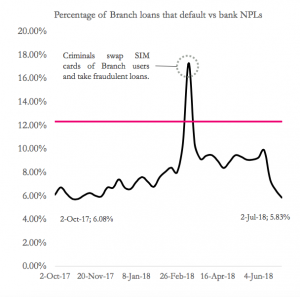 In February and March 2018, Branch’s NPLs spiked to above 17 per cent as a result of SIM-swapping scandal that hit Safaricom’s customers. Since it leverages on MPesa to disburse loans, there were increased cases of fraudulent borrowing across the Branch’s platform.

“Branch has maintained a capital structure with low gearing. The post-fund raise asset base of Ksh2.25 billion is financed with about Ksh1 billion of senior debt and Ksh500 million of commercial paper for a total debt to equity ratio of about 2.46 times.

With shareholder funds of about Ksh650 million, and its noteholders are senior to amounts listed in ‘Other Liabilities’, the total net assets backing their investment sums up to Ksh1.3 billion for a total coverage on 500 their investment of 2.6 times,” read its Investor Teaser.

Safaricom’s M-Shwari is the only other online platform licensed to accept deposits in the country.

You Should Have This Experience In Kenya’s Maasai Mara

You Should Have This Experience In Kenya's Maasai Mara