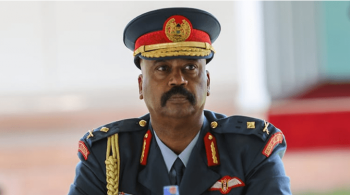 In a notice published on local daily newspapers, Major General Badi, ordered hawkers to remove such flowers and seedlings with immediate effect.

NMS boss further directed that those licensed to have such displays in the CBD should place the plants at least two meters away from the walkways.

“Selling and displaying seedlings and flowers on pedestrian and cyclists’ pathways is prohibited and anyone having such plants on Non-Motorized Traffic (NMT) corridors should remove them forthwith. Where one is licensed to have such display, plants should be two meters away from the walkways,” said Badi.

Badi has also put on notice brokers who are illegally allocating picking and dropping bays for Public Service Vehicles (PSVs) in total disregard of NMS orders.

He said that the exercise of allocating parking slot and picking/dropping bay will be done by a committee appointed by his office.

“No person or officer is authorized to allocate, and or assign picking/dropping bay including parking slots without written authorization from Director Roads, Transport and Public Works upon approve by the Office of the Director General.”

“Any request for allocation or assignment of picking/dropping bay and parking slot will undergo scrutiny from the committee appointed by NMS to undertake this function. Any purported approval granted without following this procedure is null and void,” he stated.

Badi also warned motorists driving on pedestrian walkways or cycle-lanes adding that violators will be prosecuted and their license suspended.

“Parking, driving or riding on pedestrian walkways or cycle-lanes by motor vehicles or motorcycles is prohibited. Any driver or rider found in contravention will be prosecuted and their driving license suspended and where damage is occasioned to the infrastructure, the violator will pay for its restoration to previous condition,” he added.