Any government that is of, by, and for the rich cannot eradicate corruption

Home  › Africa › Diaspora › Kenya › Kenya Diaspora News › News › People › Any government that is of, by, and for the rich cannot eradicate corruption 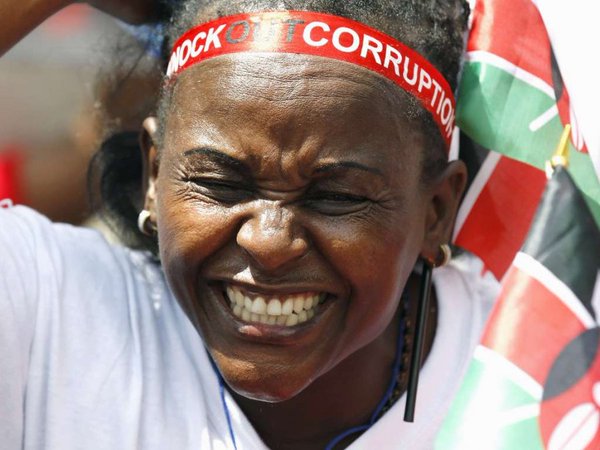 A civil society member reacts during a protest, dubbed KnockOutCorruption, against what organisers say is corruption in government, in Nairobi December 1, 2015. REUTERS

Any government that is of, by, and for the rich cannot eradicate corruption

As Kenya ushers in the New Year with daily news of more corruption, Jubilee government has mounted a campaign of denials and make-believe claims that Kenya is developing very fast despite the majority of people feeling poorer rather than wealthier.

And though negative ethnicity, bad leadership, bad system and injustice are as serious national problems as corruption, in the year that has just ended, the nation had focused mostly on corruption, making many people wonder whether the war against corruption has any chance of succeeding or it is a wild goose chase and exercise in futility that is doomed to fail.

Though I would rather be optimistic than pessimistic, from graduation of life conditions from bad to worse, it is more realistic to accept that the government economic conmanship – lying to people about rosy life – will most likely take us to the poverty and hopelessness of life in Haiti than to the development and brightness of life in Singapore.

Already we have taken the first steps towards Haiti by establishing a government of the rich, by the rich, and for the rich as revealed by the hundreds of millions that the last seven appointees to the Cabinet own. As much as I want to believe the appointment of very rich people into the Cabinet of the enormously wealthy President Uhuru was a mere coincidence, I tend to think the appointments were deliberate to guarantee full protection of Uhuru’s enormous wealth by the government.

Nevertheless, if no one can serve both mammon and God, a government whose purpose is to serve the rich who may have earned their wealth corruptly, cannot be expected to fight graft without asking it to commit suicide.

President Kennedy of America was right when he spoke of the folly of having a government of the rich and for the rich only, in his wise statement that a government that will not assist its poor – because it is only meant to serve the rich – will also not protect its rich from the revolution of the desperately poor.

But though some will argue that the government of the rich need not ignore the plight of the poor, the frog learnt the bitter truth when a scorpion begged him for a ride across the river because he could not swim. Initially reluctant because he feared the scorpion would sting him, eventually the frog agreed to carry the scorpion after the scorpion promised not to sting the frog. But when the frog was right in the middle of the river, the inevitable happened when the scorpion stung the frog who asked in disbelief: “What have you done?” You promised you would not sting me. Now both of us will die. The scorpion agreed: “Yes we shall but I could not help it. It is my nature.” When people are as gullible as frogs and their leaders as unreliable and lethal as scorpions, people must expect leaders will kill them through corruption.

Unfortunately people are not just like frogs and leaders like scorpions, Kenyans are also like Chichidodos of Ghana which will not touch faeces, but its maggots are its favourite food. Equally, Kenyan leaders condemn corruption but cannot resist its luxurious life, expensive homes, swimming pools, helicopters, big vehicles and expensive schools for their children.

All Kenyans agree, however earned, wealth is good. By agreeing that end justifies the means, Kenyans also condone corruption as a means of getting rich, making the trap of graft inescapable.

President Uhuru and Deputy President Ruto, governors, MPs, Senators, MPs, MCAs and all civil servants at national and county levels must declare and make their wealth public for people’s knowledge and audit. Secret declarations of wealth are not declarations but public relations gimmicks.

Most fundamentally, President Uhuru, Deputy President, CSs, governors, MPs and MCAs cannot be fighting corruption and doing business either with public or private sectors through personal or family companies because they will corrupt both to maximise profits. Should leaders and civil servants insist on doing business while in office, they must accept they are corrupt and resign. If they don’t resign, at least people will know they are not clean.

Ultimately the war against corruption was nipped in the bud when MPs were compromised through emasculation of Chapter Six of the Constitution on integrity. They cannot cast the first stone on the corrupt, and refuse to be scrutinised by Ethics and Anti Corruption Commission it reduces to nothing.

Tragically, as Jubilee of Uhuru and Ruto is unable to eradicate corruption, neither will the opposition Cord of Raila. Only a third way leadership of the calibre of Jose Mujica of Uruguay, Pope Francis and John Magufuli of Tanzania, Mutarla Mohammed of Nigeria, President Julius Nyerere and Mahatma Gandhi will save Kenya from the rot of corruption.

Any government that is of, by, and for the rich cannot eradicate corruption Reviewed by samrack on January 3, 2016 .

A civil society member reacts during a protest, dubbed KnockOutCorruption, against what organisers say is corruption in government, in Nairobi December 1, 2015. REUTERS Any government that is of, by, and for the rich cannot eradicate corruption As Kenya ushers in the New Year with daily news of more corruption, Jubilee government has mounted a