Al-Shabaab leader lashes out at Kenya over maritime dispute 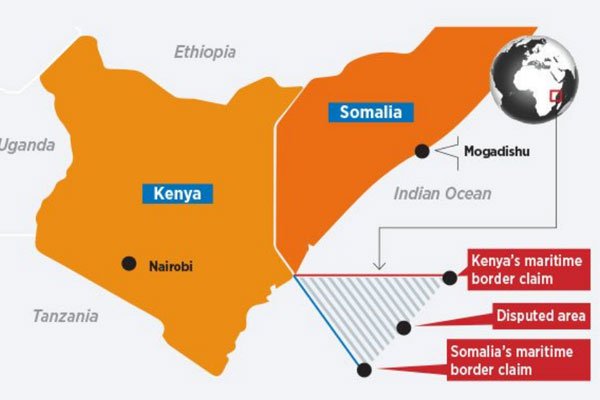 The area in the Kenya-Somalia maritime border dispute forms a triangle east of the Kenya coast. GRAPHIC | NATION MEDIA GROUP

Al-Shabaab leader lashes out at Kenya over maritime dispute

The message, his first audio missive since 2016, refers to recent events such as contentious elections in the semi-autonomous state of Jubaland at the end of August.

“There seems to be an increase in the invasion led by the United States and Britain,” Diriye said in the 20-minute message circulated on pro-Shabaab websites.

“Hostility by Christians against Muslim society has increased. The objective of this hostility is to loot the oil wells in the country and other natural resources such as fish, and to hand our oceans over to Kenya and Ethiopia,” he said.

Kenya and Ethiopia are both part of the African Union’s peacekeeping mission in Somalia, Amisom, which has been deployed since 2007 to support the fragile central government and played a key role in pushing the Shabaab out of much of southern Somalia.

Diriye, who succeeded Ahmed Godan after he was killed in an American drone strike in September 2014, in particular criticised Kenya, which is involved in a diplomatic spat over its maritime border with Somalia with possibly lucrative Indian Ocean oil and gas reserves at stake.

The disputed region covers more than 100,000 square kilometres where Kenya has already granted exploration permits for three oil blocks, a move the Somalis are contesting.

Somalia has taken the case to the International Court of Justice, the UN’s highest court, which will begin hearing it in November.

“We are informing our Muslim nation that the Mujahideen will never accept, and are against any decision made by the so-called International Criminal Court,” said Diriye.

“We tell the world that we don’t compromise on our oceans and we need our society to be aware that Kenya has already engulfed a large swathe of our territory before aiming for the maritime claim.”

Al-Shabaab considers that part of north-eastern Kenya — historically inhabited by ethnic Somalis — should be returned to Somalia.

Since Kenyan forces deployed to Somalia in 2011, the Shabaab have carried out several deadly attacks on its soil, the latest on January 15 against an office complex housing the Dusit hotel, which left 21 dead.

Al-Shabaab leader lashes out at Kenya over maritime dispute Reviewed by samrack on September 20, 2019 .