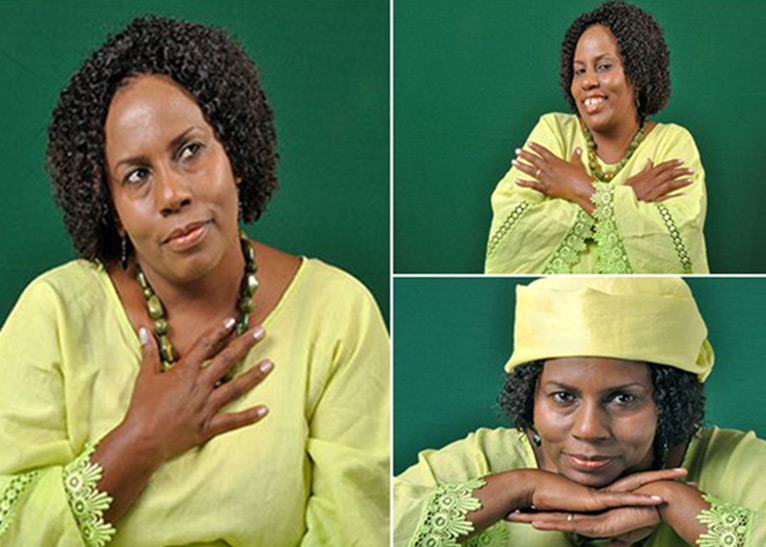 Jemimah Thiong’o is a household name when it comes to quality, unfading gospel music.

Well-known for hits such as Akisema Atakubariki, Pendo la Ajabu, Alinitua among others; Thiong’o is one of the most respected gospel artistes in the country.

The mother of three tells it all to eDailyin this exclusive interview:

EDAILY: Tell us about your childhood, family and education

JEMIMAH: I am the tenth born in a family of eleven (five girls, six boys). I grew up in a Christian family. After secondary school is when I understood what being born again really is. What I was calling salvation when I was little wasn’t salvation – it was Christianity.

My parents were pretty well-off. I went to Park Road Primary School in Nairobi and then Kalimoni Mission School. I later joined St. Philips Matangini Secondary in Yatta. My dad passed on around the same time. My family thereafter faced financial difficulty and I was thus transferred from St. Philips to Khalsa Girls High School in Nairobi. I got married nearly immediately after completing secondary education.

EDAILY: Did you start singing at a tender age?

JEMIMAH: Yes. I was a good singer even when I was little. My elder siblings would often request me to sing for them. My mum nicknamed me a bird or a small radio. My father, however, thought I was making noise. He did not like the way my singing was affecting my performance in school. My father would time and again discourage me from singing. Sometimes I wish God had given him more years of life to see what music has done for me today.

I have been singing for 13 years now. I recorded my first album in January 2003. Hallelujah.

EDAILY: How did you ward off temptations that come with teenage life?

JEMIMAH: Being a mother, I would like to speak to women. The word written: ‘talk to your child’ is very important. Don’t tell your daughter: ‘I don’t want to see you with boys’, tell her: ‘it’s good you have boyfriend and let me know him; and it is not good to engage in sexual acts early.’ Also tell her the worst consequences of indulging in alcohol, and cigarette smoking. When I know that I should not involve myself in sexual acts as a teenager, no man can convince me otherwise – unless I want to get lost.

My parents advised me expansively and that is what I would encourage all mothers to do. Authoritarian rules set by parents do not help. My parents and I were the best of friends.

EDAILY: Describe your personality – are you spontaneous or reserved?

JEMIMAH: Despite having a lot of friends and going out occasionally, I am a loner in one way or the other. When I was growing up, my elder sister had a child whom she could not leave in the custody of her husband. The child became my responsibility. I would wake up in the morning, clean the napkins; prepare the baby’s food at 4am. I would then rush to school because I was studying at a nearby day school. By the time 4pm clocks, I’d rush home because I had a kid to take care of. So, I did not have time to hang out with girls. That explains why I developed a reserved personality.

EDAILY: What has pursuit of Christianity taught you?

JEMIMAH: Pretext is what makes Christianity hard – be real. Speak the truth always; it shall set you free. If you don’t have money, don’t live the life of a billionaire. Go to Gikomba, collect your mitumba; clean them well, iron them well and sell them to people. We mess our lives when we try to be other people. I am a farmer, I don’t hide it. I have three children, I don’t hide it. I have a husband, I don’t hide it. However, everyone has their own secrets – you cannot blow up your life in the limelight. But you cannot live a good life if you know you are living a lie. Christianity is the truth.

EDAILY: What course did you pursue in college?

JEMIMAH: I studied Front Office. After O levels, I joined a private college to do secretarial course but the college urged me to pursue Front Office. Immediately after I finished the one-year course, I got married (laughs).

EDAILY: Why did you wed that early?

JEMIMAH: I don’t know. But I’d say my boyfriend then – now my husband – was just a friend. He was a friend to my brother and I was a friend to his sister. I tell people I did not really plan to go get married; I was going to see his sister who had gotten a child. But I realised the time I had been with my husband, I did not want to pretend anymore. I did not plan it, but that’s how it was. My husband asked for my hand in marriage, and my mum gave him the permission.

EDAILY: What has marriage taught you?

JEMIMAH: Marry a friend. However, that friend can turn out to be something else. But because he or she was your friend, you will – at some point – come to an agreement. He might become ruthless, but there’s that friendship that keeps you together. I have been married for the past 34 years now (laughs) and I tell people my marriage turned out to be a long-distance marriage because my husband was working far away.

EDAILY: What challenges did you face in long distance marriage; and how did you overcome them?

JEMIMAH: When I got married, he went to Mombasa; he came after a few months. He took us to the village in Kiambu and it found when I was busy with church and my two children. I think being rooted in Christianity, working a lot in the church, working in my farm; and focus – focus that I am married to one man; the man I love, helped me a lot.

I’d tell women – just tell your mind: ‘it doesn’t matter where he is; he is the man I love and I want to live with him’.

EDAILY: And what is the ingredient of staying for long in marriage – you have done 34 years and you are still counting…

However, for young couples of today’s generation – forgiveness is not anything that comes easy. You’ll keep on reminding me of things that I did. Once you forgive; let it be a thing of the past – don’t record the wrongs for reference. Try to forget – even if it is hard. Young couples should try to walk with people who have gone before them – people they can confide in. What has led many people not to try to look for mentors is because they wait until their marriage is in trouble. Don’t get a mentor who is within the same generation as you; get someone who has gone before you for ages – how did they make it? And most of us, women, stick to marriages because we want to see our children grow in a complete family setup. The woman puts up the family, finances and children intact.

As a woman try to make your marriage work; only walk away when you’ve persevered and the union has still failed to perk up. Petty things like you quarreled, he sold a plot without your knowledge; shouldn’t make you end the marriage.

EDAILY: How do you resolve issues in marriage?

JEMIMAH: I met my man when I was approaching 20’s. He was in his 20’s too. There’s no marriage that is immune to disagreements. We do disagree, and I’d take my stand because I know I am right. But, it’s good to agree right from the beginning – that though we’d disagree in our marriage, we’ll always agree to disagree so that we reach an agreement. You shouldn’t wait to solve a problem later; face it now. Even if he walks out on you; when he comes back, remind him there’s an unresolved issue that you should pick up and work it out. You cannot keep on piling issues. Piling issues in marriage explains why people are dying of stress and depression. I don’t pile up things; if I call you and you are not responding; I text you there and then – you won’t delete the text.

EDAILY: What has motherhood taught you?

EDAILY: On to your fulfilling gospel music – what are the motivational factors behind them?

JEMIMAH: I’d use Pendo la Ajabu to respond to the question. Pendo la Ajabu was inspired by a lady who was working for me; and she had a child. She’d leave the child with me. After a while, she got a boyfriend who deceived her to killing the child so that they could start a new life together. People knew that she murdered the child by feeding her mice poison. She was beaten; and I got wind. I looked for her; and told her: ‘even if you are here, the love of God is still with you’. And that is how Pendo la Ajabu was composed.

EDAILY: What is your secret to timeless songs?

JEMIMAH: Any song that has been a real life experience and the word of God is incorporated in it will always be timeless.

Akisema Atakubariki’ singer Jemimah Thiong’o: How I succeeded in long-distance marriage Reviewed by samrack on February 11, 2020 .