A Letter to President Uhuru Kenyatta, by a Kenyan Citizen, Geoffrey Wainaina 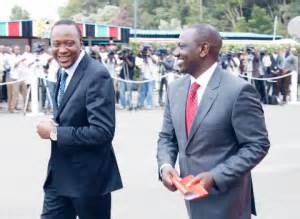 A Letter to President Uhuru Kenyatta, by a Kenyan Citizen, Geoffrey Wainaina

I write to you to voice concerns about that which ails your administration. I write to you not as a Jubilee supporter but as a Kenyan. I have noted with concern that despite the high hopes majority of those who voted for you had in your capacity to deal with certain issues, you seem to be reluctant to act in the manner Majority of Kenyans expect of you.

I have always held the view that you are decisive, that you cannot be held captive by forces of corruption, that as the President of the republic you will not join those who define the problem and talk about the problem but you will be in the forefront in finding the solution. That indeed with the deputy President you will live true to the Mantra Kusema na Kutenda.

Mr President serious allegations of massive theft of public funds have been linked to officers working in the top echelons of your administration. The Presidency is quite on this matter. At this point I really don’t care whether the allegations are true or false because those officers still hold public offices in your administration. At this point the public assumes that they are holding those offices with your consent.

Mr President I must tell you as bluntly as I can that Kenyans are tired with the tough talk on corruption. For heavens sake we are midterm in your First term. When do we expect you to act?. Why should the President join the rest of Kenyans in talking tough about corruption when he is the head of state and the appointing authority for Public servants? Why should the Presidency complain about tedious Processes in fight against graft while you enjoy tyranny of numbers in Parliament?

Mr President I would like to remind you that the Jubilee Manifesto had some Promises to the Kenyan People. Those Promises are threatened by the money that we lose in graft. Some of those Promises included ensuring that hunger is a thing of the Past. I watch news every night and there are Million of Kenyans still going hungry. But the irony is Farmers in Eldoret are not able to sell their maize to NCPD apparently because your government did not allocate sufficient funds to buy all the Produce they harvested. Farmers in Eldoret today are missing the Kibaki days when all the Produced was bought at a fair Price.

Mr President the Jubilee Manifesto Promised to ensure 100% transition rate from Primary to Secondary… Two years down the line we continue to get headlines that scream close to half a Million young brains who do not get a Place to Secondary school. If Former President Kibaki could ensure free Primary school education I do not Know what is difficult in ensuring we have adequate Secondary schools to cater for all the Children who transit out of class eight.

Mr President you promised a Low interest rate regime. That the youths of this country who engage in business will be able to be competitive in the global Markets. Instead of Low interest regime we have witnessed interest rates spiraling out of control..

Mr. President stop defining the Problem for us- We Know it,

Stop talking about the Problem -act on it!

A Letter to President Uhuru Kenyatta, by a Kenyan Citizen, Geoffrey Wainaina Reviewed by samrack on March 21, 2015 .

Share thisFacebookTwitterPinterestEmailWhatsAppA Letter to President Uhuru Kenyatta, by a Kenyan Citizen, Geoffrey Wainaina Good Morning Mr President… I write to you to voice concerns about that which ails your administration. I write to you not as a Jubilee supporter but as a Kenyan. I have noted with concern that despite the high hopes majority of those