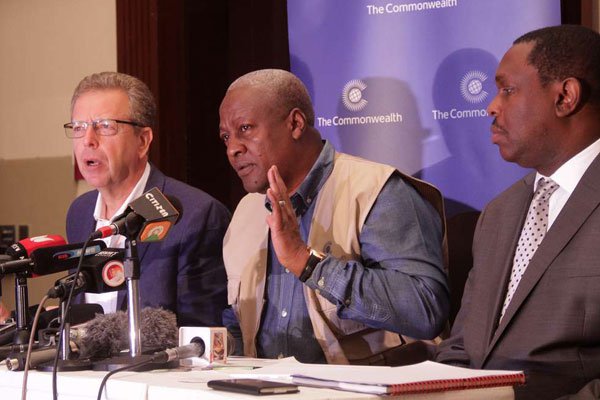 John Dramani Mahama (center), the head of the Commonwealth Election Observer Mission, speaks during a press conference on August 3, 2017 at Crowne Plaza in Nairobi. Besides the US Embassy, other foreign missions in Kenya have deployed observers. PHOTO | EMMA NZIOKA | NATION MEDIA GROUP

In excess of 5,000 election observers and hundreds of international journalists are in the country as the global community turns its eyes on the most competitive Kenyan election yet, due on Tuesday.

On Thursday, the Independent Electoral and Boundaries Commission (IEBC) said it was swamped by requests for accreditation from more than 25 international groups to take part in the elections.

ACCREDIT
Majority of countries with diplomatic relations with Kenya will also have delegations observing the polls that will pit the ruling Jubilee Party’s President Uhuru Kenyatta against his main rival Raila Odinga of the National Super Alliance (Nasa).

Four days to the elections, IEBC said they had accredited more than 560 and were working round the clock to give the nod to thousands of applicants.

An estimated 200 foreign journalists had been accredited but Mr Andrew Limo, the IEBC spokesman, said the number could go up.

“We are overwhelmed by late requests, so the numbers could go higher,” Mr Limo told the Nation by phone.

The number of foreign observers is a significant increase from the 1,834 for the 2013 General Election.

They will join 7,000 others drawn from the Kenya Elections Observers Group.

CONDUCT
The foreigners include international journalists covering the elections for major global news networks, as well as politicians and electoral experts who have specialised in election monitoring through international observer missions.

IEBC guidelines bind the observers in a code of conduct that requires them to be neutral and not to interfere with the elections.

They will work in accordance to the Declaration of Principles of International Election Observation.

IMPORTANCE
The commission accredits observers of Kenyan elections under the powers conferred to it by Section 42 of the Elections Act, 2011 and the plenary powers available to it under the Constitution and the IEBC Act.

That the observer groups have sent their big guns as heads of mission signals the importance of Kenya in the comity of States and a reminder to the IEBC on the need for transparent, inclusive and credible elections.

And there is a heavy American presence in the observer teams for next week’s elections.

CARTER CENTRE
Former Secretary of State John Kerry is heading a 67-strong US Observer Mission, besides being the co-leader of the Carter Centre, which has deployed 80 observers.

The National Democratic Institute (NDI), which has supported the strengthening of democratic institutions in Kenya since 1993, has deployed 11 observers.

Among them is the vice-chair of the Congressional Black Caucus, who arrives this week, as co-leader of an election monitoring delegation with the US Democratic Party.

Congresswoman Karen Bass, who represents a section of Los Angeles, will be accompanied by five US Congress staff workers as part of the NDI team.

Ms Bass, 63, is a senior Democratic member of the Africa sub-committee of the US House of Representatives.

Ten of the 72 European Union (EU) observers have been in the country since April, when they assessed the political party primaries and attended rallies for various political parties.

They have been mandated to develop a comprehensive assessment of the electoral process.

The membership of the team is drawn from the Pan-African Parliament, African ambassadors to the AU in Addis Ababa, election management bodies and civil society organisations, think-tanks and the academia from various African countries.

IMPARTIAL
The LTOs have been in the country since July 3 and will serve until August 26 while the STOs were deployed from July 28 to August 14.

Commonwealth Secretary-General Patricia Scotland said their observers will assess the pre-electoral environment, voting process, counting and tabulation procedures as well as the announcement of results.

“Observers will act impartially and will adhere to the standards of the International Declaration of Principles for Election Observation, to which the Commonwealth is a signatory,” Ms Scotland said.

RECOMMEND
The group will determine whether the elections have been conducted according to the standards to which Kenya has committed itself.

This includes its own election-related legislation as well as relevant regional, Commonwealth and international commitments.

The observer group will also make recommendations, where appropriate, for the strengthening of the electoral framework.

It is led by former Ugandan Minister for Tourism Edward Rugumayo.

Besides the US Embassy, other foreign missions in Kenya have deployed observers.

CHRIS MSANDO
On Thursday the heads of the missions held a press conference in which they urged Kenyans to come out and cast their ballots and give the IEBC the space to fulfil its vital role.

“It is essential that IEBC staff be safe from harassment or attack, and we welcome the Government of Kenya’s commitment to provide them with additional security,” they said, in reference to last weekend’s murder of Mr Chris Msando, who was the acting director of ICT at the IEBC.

The statement was signed by heads of mission representing states in the EU, the US and Canada, who reiterated that, as partners, they do not support a particular candidate or party.

John Dramani Mahama (center), the head of the Commonwealth Election Observer Mission, speaks during a press conference on August 3, 2017 at Crowne Plaza in Nairobi. Besides the US Embassy, other foreign missions in Kenya have deployed observers. PHOTO | EMMA NZIOKA | NATION MEDIA GROUP  500-strong world team keeps an eye on critical Kenyan