48 Years Later, 82-Year-Old Kenyan Man Returns to the US to Graduate with a Master’s Degree in Political Science

Home  › Diaspora › Education › Kenya › News › 48 Years Later, 82-Year-Old Kenyan Man Returns to the US to Graduate with a Master’s Degree in Political Science 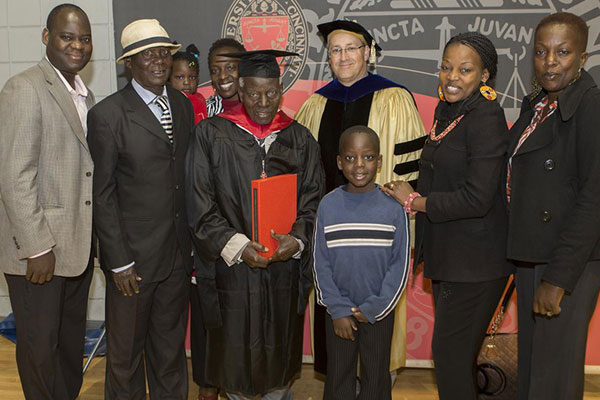 Obura Family,48 Years Later, 82-Year-Old Kenyan Man Returns to the US to Graduate with a Master’s Degree in Political Science

48 Years Later, 82-Year-Old Kenyan Man Returns to the US to Graduate with a Master’s Degree in Political Science

Forty-eight years after leaving the US, Samuel Obura recently returned to graduate with a a Master’s degree in Political Science.

Now, isn’t that a story you would want to read? Samuel Obura’s story is an unlikely one – 48 years after completing his Master’s degree, this 82-year-old father of seven finally travelled back to the US earlier this month for his long overdue graduation at the University of Cincinnati.

A conversation he had with his daughter, Sally Mallowa, who lives in the US, in February this year, triggered this turn of events.

Sally had called her father to inform him that she would soon be graduating with her PhD, when he mentioned that he regretted leaving his thesis behind when he travelled back home in 1967.

From this conversation, Sally discerned a wistfulness in her father’s voice, a wistfulness that prompted her to find out whether his university had kept the 48-year-old thesis.

What she would never have imagined is that her simply inquiry about her father’s dissertation would spiral and magnify into a series of events that would see him go back to the US more than four decades after he left, to graduate.

“The university was excited about their 82-year-old alumni, and cared enough to not only find his thesis, but also invite him to walk in the 2015 graduation ceremony,” Sally says.

With the help of her elder brother, Festo Ger Obura, Sally managed to arrange for her father’s trip abroad for the historical occasion.

Sally, only in Class Five when Obura retired from the civil service in 1988, had a vague recollection that he had studied abroad “somewhere in Canada”,  her only childhood memories of this being the apples, books and dolls her father brought back home with him.

“In secondary school, I struggled with Math, and often consulted dad, who was good in the subject. He was in the village at the time, living his life quietly as a retired farmer, but he would ask me to send him, through post, the sums that I found difficult. He would then work on the questions and send me back the formulas and answers through post. That is how dedicated he was to my education. He still is,” she fondly says of her father.

With the support of her family, the University of Cincinnati and the American Embassy, Samuel Obura made it to the United States, not just for his daughter’s PhD graduation ceremony from Iowa State University, but also to pick his thesis, which he had written and defended, but had not had the pleasure of walking in the commencement ceremony.

“I am glad that my father waited 48 years to finally receive his certificate, because this way, we all got to share this momentous occasion,” adds Maria Obura Walker, one of Mr Obura’s daughters, who accompanied him to the US.

He received a warm reception at the university, which included a special mention by university President, Santa Ono. He acknowledged Mr Obura and his family’s presence, and thanked him for going back for this thesis, a moment Obura says he will treasure for the rest of his life.

His journey began when he had a chance meeting with the late Tom Mboya at the Jomo Kenyatta International Airport, where he, (Tom Mboya) had gone to see off students who were part of the famous Airlift Africa project, where Kenyan students were flown to the US to study.

“I had applied to be considered for the programme, but there was a long waiting list, besides, those days, the planes were very small, so only a few students could travel at any given time.”

Obura had accompanied a friend who had won a scholarship, and was at the airport’s lounge when Tom Mboya approached him.”

“You have come?” he remembers Mboya asking.

Sensing an opportunity in that single question, he quickly responded: “Yes, I have come.”

“Do you have your luggage with you?” Mboya continued.

“Yes, I do,” he remembers responding, though that was not the truth.

The truth was that his belongings were back home in Makongeni, in the outskirts of Nairobi, but he knew he could get one of his friends, who had also come to say goodbye, to organise for his luggage to reach him before the plane left – he already had a passport and visa. As fate would have it, one of the scholarship beneficiaries had failed to show up that day, and so Obura ended up taking his place.

He left Kenya for Trinity College in Toronto, Canada, intent on studying a degree course in engineering, but despite excelling in his studies, switched his majors after two years to Political Science, English and Mathematics.

In 1965, he graduated with a BA in Political Science, later moving to the University of Cincinnati for his Masters, through a scholarship that guaranteed him tuition fees and a return air ticket.

By 1967, he had completed his coursework, written his masters dissertation and accumulated enough credits to start a PhD Program, but had to leave abruptly when he was informed that the Airlift Africa project was closing shop, and that he needed to pick his air ticket then or forfeit it.

“I knew that I would have a difficult time raising the air fare, and since I had every intention of returning home, I jumped at the chance to go back  to my wife and children, who I had not seen in seven years.”

Financial hardship in the quest for education was nothing new to him – he could trace this challenge back as far as the 1940s .

“My father died when I was 11, and his dying wish was to see me get an education, and because of this, my mother did not allow me to attend his funeral, insisting that I had to remain school.”

His secondary school fees of Sh75 for his first year at Maseno school seemed like an insurmountable challenge, but his determined mother, who had only Sh20, sought the help of three relatives, who each contributed Sh20 towards his school fees.

“The following year, I was not as lucky, so my mother decided to go and see the principal about a possible bursary for her bright son,” he recalls.

The empathetic principal had the perfect solution for the family. Obura would stay behind during school holidays and help tend to the trees, (planting, watering) to earn his stay when school was in session.

“When my classmates went on three-week holiday breaks, I only got one week’s break, the remaining two spent at school working, and when school was in session, I was assigned cleaning duties,” he recalls.

Financial setbacks continued to plague his quest for education even after excelling in his secondary school studies, but he clung on to hope, thirsty for knowledge and determined to earn the degree he so much desired.

After secondary school, he was invited to study engineering at Makerere University in Kampala, Uganda, but opted to work for a year with the then Ministry of Works.

“The year was 1953, and my mother had just passed away, and being the eldest, I was responsible for my five siblings, for whom I wished the same education that I envisioned for myself – it therefore made sense that I should get a job, instead of going to university,” he explains.

“Besides,” he adds, “All I had was a pair of shorts, my school uniform, and not a single pair of shoes. I wanted to be able to afford a spare set of clothes when I joined university.”

After a year, he finally made his way to Uganda, but instead of joining Makerere, he settled for a diploma course in Engineering at Nakawa Engineering School, since the school offered a higher student allowance, that would enable him to assist his siblings back home.

“The student’s allowance offered at Nakawa Engineering School at that time was 60USh a month, compared to Makerere’s 200USh a year – which one would you have gone for?”

His diploma in engineering earned him a position in the civil service, and he was posted to Nyeri. It is while here that he heard of the opportunities being offered by the Africa Airlift Programme. He eagerly applied, still keen on earning a degree.

Even though he left Cincinatti without graduating, he ensured that he came back with the letter from the University stating that he had completed all the course requirements.

Upon his return to Nairobi, he was absorbed into the Ministry of Commerce and Industry as an assistant secretary, rising up the ranks to an undersecretary by the time he retired in 1988.

He has been married to Hannah Obura for 57 years. They have seven children, 10 grandchildren, and six great-grandchildren.

His wife, who could not travel with him to the US due to health reasons, was the backbone of the family during the time he was away for his studies. She not only brought up their first two children alone, but also accommodated his six siblings.

In honour of you, dad

The Obura family, led by Sally and Festo, set up The Samuel and Hannah Obura Education Award at Mudhiero Secondary School, in Siaya County, May this year.

This annual award will honour their father’s passion and pursuit for educational excellence, and will go towards meeting part of the tuition fees for three students that excel in the Sciences and agriculture.

Obura has also inspired one of his daughter’s, Maria, who will graduate with a Master’s degree later this year, to pursue her doctoral studies.

“I hope I can persuade dad to study with me, so that we can graduate together,” says Maria.

So what plans does he have for his Master’s certificate, now that he finally has it?

“I plan to live my life the same way I have always lived it. I am a retired civil servant and subsistence farmer, and I wake up early every day of the week, except Sundays, to go to my small farm, where I plant millet, sorghum and groundnuts, which I use to make my uji. It is a life that makes me happy and keeps me young,” he says, smiling.

48 Years Later, 82-Year-Old Kenyan Man Returns to the US to Graduate with a Master’s Degree in Political Science Reviewed by samrack on May 19, 2015 .