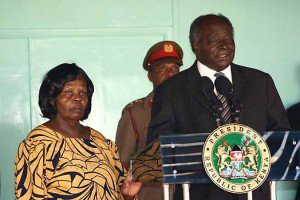 Speculations about former First Lady Mama Lucy Kibaki’s whereabouts thrived on Friday, amid media reports of her admission in an Intensive Care Unit (ICU) at a Nairobi hospital.

The 75-year-old has been away from the limelight since 2010 and was conspicuously missing during the handover from President Mwai Kibaki to Uhuru Kenyatta in 2013.

1. Just months after her husband had been sworn in as the third President of Kenya, she reportedly shut down a bar inside State House where ministers and close allies of Mwai Kibaki used to enjoy a tipple with the new head of state.

2. She made her husband convene an impromptu press conference at State House and to unequivocally declare his monogamous status after reports had emerged of a secret second wife.

3. In May 2005, she stormed into the house of her then neighbour, the World Bank’s country director Makhtar Diop, in a tracksuit at midnight and demanded that he turns the music down. Mr Diop was hosting a private party to mark the end of his tenure in Kenya.

4. After the incident was captured in the dailies, the first lady stormed into Nation Centre, the Nation Media Group offices on Kimathi Street, and demanded that the reporter who had written about her confrontation with Mr Diop be arrested.

5. She was the first public figure to openly assault a journalist after she slapped cameraman Clifford Derrick who was filming her storm into Nation Centre.

6. She once slapped a master of ceremony during a Jamhuri Day dinner in 2007 hosted in State House. The MC had made the unforgivable mistake of introducing the First Lady as Lucy Wambui as opposed to Lucy Muthoni Kibaki.

The former First Lady slipped and fell on a stair case during the 2009 Jamhuri Day celebrations. PHOTO | FILE

7. During the 2009 Jamhuri Day fete at Nyayo Stadium, the former First Lady slipped and fell on a staircase but was assisted by her bodyguards.

8. She was said to have once slapped State House comptroller Matere Keriri. The allegations were later cleared in an interview in which Mr Keriri claimed the First Lady had become uncomfortable with his closeness to the President.

9. She was a victim of numerous wardrobe malfunctions during her 10-year tenure as First Lady.  Her biggest fashion blooper was when she wore a sky blue dinner dress at a White House dinner hosted President George W. Bush.

The dress was widely criticised back home due to its cheap fabric and a design that did not flatter her body.

10. Mrs Kibaki was also reported to have slapped lawyer and politician Gitobu Imanyara at State House during a briefing on parliamentary issues. She was reportedly irked by Mr Imanyara’s insistence that filing charges against another MP who had verbally attacked the President was a waste of time.

10 UNFORGETTABLE MOMENTS OF LUCY KIBAKI Reviewed by samrack on March 11, 2016 .