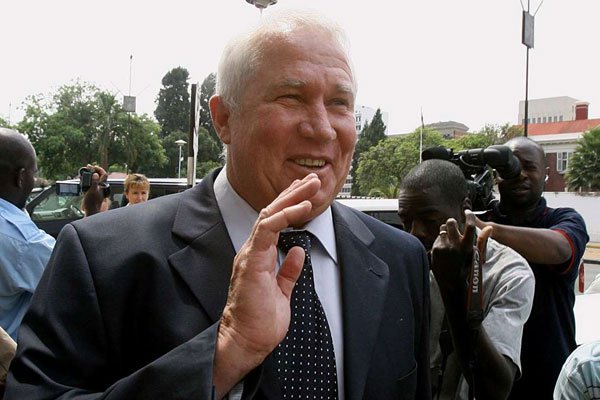 Roy Bennett (centre) arriving at Zimbabwe High Court for the start of his trial in Harare on November 09, 2009. Bennett and four others were killed January 17, 2018 in a helicopter crash in the US. FILE PHOTO | DESMOND KWANDE | AFP

Leading Zimbabwe opposition figure Roy Bennett, one of long-time president Robert Mugabe’s most outspoken critics, has died in a helicopter crash in a remote area of the US state of New Mexico, authorities said Thursday. He was 60.

Bennett was killed along with his wife Heather and three other people after the helicopter went down on Wednesday, New Mexico state police said.

A crash survivor called 911 for help but could not say where in the mountainous region the wreckage was located. After a frantic search the crash was found ablaze at a ranch about 10 miles east of the town of Raton.

State police officers at the scene “reported the helicopter wreckage had been engulfed in fire making identification difficult,” the NMSP statement read but confirmed that Bennett, 60, and his 55-year-old wife were among the victims.

Bennett, who had been largely based in South Africa in recent years, sprang to prominence as the treasurer of the Movement for Democratic Change (MDC), led by Morgan Tsvangirai.

A former farmer whose property was seized by the Mugabe regime as part of a controversial land reform program, Bennett became the best known white opposition figure in the party, working closely with Tsvangirai before they later fell out.

Bennett was arrested in Zimbabwe in February 2009 shortly before he was to be sworn in as deputy agriculture minister in a shaky coalition government after being accused of funding a plot to topple Mugabe years earlier.

Even though Bennett was eventually cleared of the charges, Mugabe refused to swear him into the job for the next two years.

Fearing another arrest on trumped up charges, Bennett fled Zimbabwe and moved to South Africa.

Roy Bennett (centre) arriving at Zimbabwe High Court for the start of his trial in Harare on November 09, 2009. Bennett and four others were killed January 17, 2018 in a helicopter crash in the US. FILE PHOTO | DESMOND KWANDE | AFP  Zimbabwe opposition figure Roy Bennett dies in US chopper crash LOS ANGELES