Why Raila, Kidero are worried about August elections 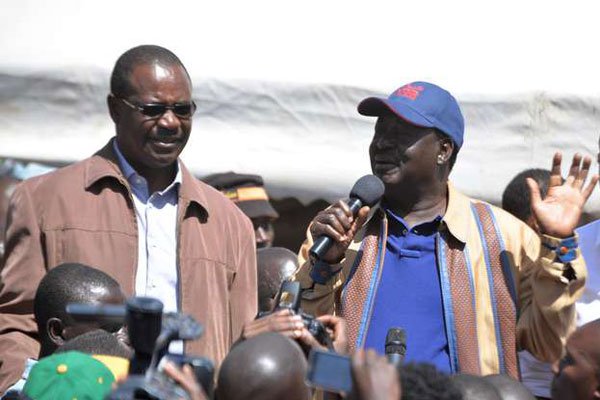 Why Raila, Kidero are worried about August elections

Nairobi Governor Evans Kidero is concerned about claims that voters are being brought in or transferred from other jurisdictions, as the Independent Electoral and Boundaries Commission (IEBC) launched a mass listing campaign on Monday.

Dr Kidero, speaking at the launch at Kenyatta International Convention Centre, said leaders should desist from bringing in non-resident voters.

He said people who come to the city just to vote are responsible for causing chaos due to resistance from local residents.

“We have heard of massive voter ‘importation’ which in most cases brings insecurity…like in Kariobangi during last year’s voter registration exercise after two youth groups clashed,” said Dr Kidero.

The governor said it is illogical for a leaders to transfer voters to the city just to vote for them yet they do not know the area.

“How do you vote for a governor, a senator or an MP or an MCA in an area you know nothing about?” he wondered.

He called for an online registration process that he said will address challenges of ghost voters and automatically remove all dead voters from the register.

“In this day of technological advancement, voter registration should be part of wider a programme of digital transformation…one which is easy to find, always available, quick and simple to use,” said Dr Kidero.

He said he was concerned that youths between 18 and 24 years of age, despite being active on social media platforms, have refused to take part in the election exercise.

He also urged chiefs and the Registrar of Persons to allow young people without national identification cards to register as voters in the city and not ask them to go back to their rural villages to be registered.

Dr Kidero said many residents have been denied IDs in Nairobi on the basis that they are not from the city thus denying them a chance to participate in electing their leaders.

Cord leader Raila Odinga echoed Dr Kidero’s sentiments, warning aspirants against transporting voters from other regions, saying it was unfair for a candidate to end up representing people not from the area where he is elected, since they did not understand challenges facing region.

“It is only the wearer of the shoe who knows where it pinches,” he said.

Mr Odinga also called for the distribution of over 400,000 national identity cards that are yet to be collected by applicants, saying they had been sent to wrong regions.

He also said that, to ensure only genuine transfers took place, the IEBC should disclose the regions voters had transferred from, arguing that the transfer of huge numbers of voters to Nairobi would correspond to a similar reduction in other areas.

Mr Odinga urged the Registrar of Persons to ensure the names of people who had not collected their IDs are published, indicating which regions they had sent them to, so that the applicants could access them and use them for voter registration.

He said the government risked being accused of sabotaging a democratic process by holding on to the documents, which are required for one to register as voters.

Government Spokesman Eric Kiraithe said no efforts would be spared to ensure the “independence of the IEBC was protected” and also to ensure adequate security was deployed to ensure the one month exercise in which six million votes are being targeted nationally went smoothly.

Elsewhere, another aspirant has raised concerns about Ugandan citizens being transported to parts of western Kenya to register as voters.

Youthful Bungoma politician Moses Nandalwe, eyeing the Sirisia parliamentary seat on an ODM ticket, has claimed that a politician is facilitating Ugandans to register in the constituency so as to win the seat.

“I am shocked…they are desperately importing voters from Uganda,” Mr Nandalwe said.

“Last year so many Ugandans came in and registered as Kenyans. Now I have information that the politician has facilitated them to come and register as voters to vote for Jubilee in this region,” he added.

He said if the trend is allowed to continue, the country would be set for chaos.

Mr Nandalwe, who is viewed as the front-runner in the August elections and Mr Odinga’s ally, denied claims that his supporters were planning to raze Jubilee office at Sirisia trading centre.

“When you see someone linking me to arson that hasn’t occurred yet, he is the same person who will still burn the Jubilee office then blame it on me.

“I have always stated that Sirisia constituency is ODM and we will take power without chaos or anarchy,” he said.

Why Raila, Kidero are worried about August elections Reviewed by samrack on January 16, 2017 .