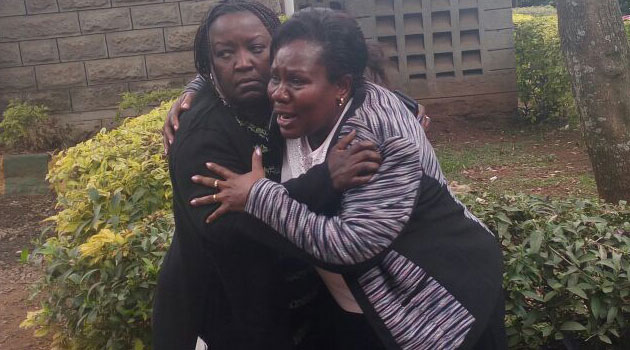 The scene that was at the City Mortuary – where the body of the late Independent Electoral and Boundaries Commission (IEBC) ICT manager Chris Msando was discovered – after days of searching, is best described as heartbreaking.

The air was filled with wailing as helpless family members were forced to come to terms with the untimely demise of their own son.

The body has deep wounds on the hand and injuries to the head that signal torture and possible execution. The police are yet to give an official statement concerning the demise of Msando and possible perpetrators.

The IEBC Chairman Wafula Chebukati decried the death by torture of an employee he described as one of the best in the Commission.

“There is no doubt that he was tortured and murdered. I know post mortem will be done. In our mind as a Commission, the only issue is who killed him and why. That is the question that must be answered,” he said.

The family members who spoke in low tones wondered why someone had to take the life of their son just a few days to the elections.

Overcome with grief, the family decried the slow nature of the investigations questioning why nobody could have identified him earlier yet his face had plastered the local media.

Msando’s body was found stripped of clothing in a thicket in Kiambu county and was transported to the City Mortuary on Saturday at 11 am by Kikuyu police station officers.

He was recorded as an unknown body according to the mortuary records.

Chebukati who spoke to the media at City Mortuary urged the government to beef up security for IEBC officials.

According to Pamela Ahago, the late Msando’s sister, the last time the family talked to him was on Friday and that is the same day he went missing.

Msando was involved in the management of the KIEMS for voter registration, voter identification and results in transmission.

Who killed him and why? A nation ponders the murder of IEBC manager Msando Reviewed by samrack on July 31, 2017 .

Share thisFacebookTwitterPinterestEmailWhatsAppMsando’s family grieves over their loss at the City Mortuary/DANNISH ODONGO Who killed him and why? A nation ponders the murder of IEBC manager Msando The scene that was at the City Mortuary – where the body of the late Independent Electoral and Boundaries Commission (IEBC) ICT manager Chris Msando was discovered – after