What Kenya’s show at US Jerusalem embassy shift means 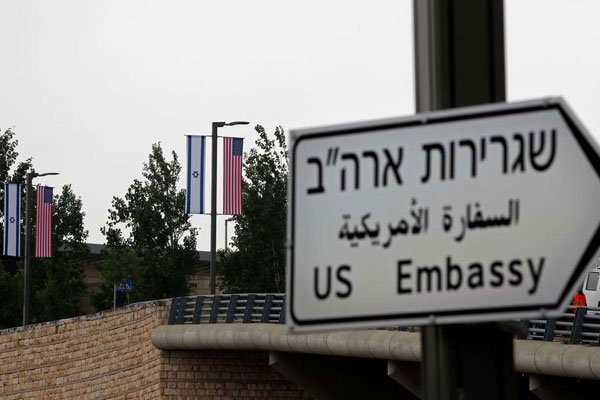 A road sign indicating the way to the new US embassy in Jerusalem. Kenya is among the 33 countries that sent representatives to the embassy’s opening on May 14, 2018. PHOTO | THOMAS COEX | AFP

What Kenya’s show at US Jerusalem embassy shift means

Kenya is among the 33 countries that sent representatives to the opening of a US embassy in Jerusalem on Monday, a move that could put it at risk of more terror attacks.

Israel’s Foreign Affairs ministry told Qatar-based media house Al-Jazeera on Monday that the Asian country had invited all the 86 countries that have diplomatic missions in its borders to attend the event, but only 33 confirmed attendance.

Kenya, Tanzania, South Sudan, Rwanda and Ethiopia were among the African states that were represented during the relocation of US embassy from Tel Aviv to Jerusalem.

Because Jerusalem is claimed by both Israel and Palestine, the occasion sparked fatal protests in the Gaza strip.

Israeli forces killed at least 58 Palestinians as they moved to quell the protests.

And due to the religious dimension to the fight over Jerusalem, observers fear that Kenya’s show might place it at more risk of terror attacks.

In fact, 10 days before the function in Jerusalem, the American embassy in Kenya had issued a travel advisory.

“Extremists may use the upcoming relocation of the US Embassy in Israel to target US citizens. Terrorists may employ a variety of tactics,” it said.

“They may target schools, hospitals, churches, tourist locations, transportation hubs, and other public venues,” it added, informing its citizens to keep a low profile, to avoid crowds, to report social media threats and such.

A section of Twitter users have been reacting to Kenya’s appearance at the function, with some opining that Nairobi showed a lack of spine.

“I saw that and hanged my head in shame,” posted one Twitter user.

“Most sub-Saharan African countries would never do anything that might jeopardise donor funding from Israel or the US,” tweeted another.

At 13, Africa had the heaviest representation than any other continent whose countries sent their officials to the event.

Kenya passively expressed its support of the US recognition of Jerusalem as Israel’s capital last year when it abstained from voting against Washington at a United Nations session.

It was among 21 countries that failed to vote at a UN General Assembly in December 2017.

Whether Nairobi’s position will alter its relations with Arab states is a matter time will tell.

The Arab League that comprises 22 member states has asked the international community to oppose the “unjust decision” by Israel and the US.

Al-Jazeera reported on Monday that the league called the embassy relocation a “blatant attack on the feelings of Arabs and Muslims” and a “grave violation of the rules of international law”.

In Africa, countries like South Africa and neighbouring Uganda, took a hard stance against the US on the matter.

South Africa has in fact announced the withdrawal of its ambassador to Israel following the deadly clashes in Gaza.

“As we have stated on previous occasions, South Africa reiterates its view that the Israeli Defence Force must withdraw from the Gaza Strip and bring to an end the violent and destructive incursions into Palestinian territories,” said South Africa’s Department of International Relations and Cooperation.

But Israel’s Prime Minister Benjamin Netanyahu, in his speech at the opening of the US embassy, said Jerusalem belonged to his country.

“In Jerusalem, Jewish exiles from Babylon rebuilt the Temple, which stood for many more centuries. In Jerusalem, the Maccabees rededicated that Temple and restored Jewish sovereignty in this land.”

US President Donald Trump, who did not attend but was represented by his daughter Ivanka and her husband Jared Kushner, said in a video address that Monday’s action was long overdue.

“For many years we failed to acknowledge the obvious. The plain reality that Israel’s capital is Jerusalem,” he said.

What Kenya’s show at US Jerusalem embassy shift means Reviewed by samrack on May 15, 2018 .