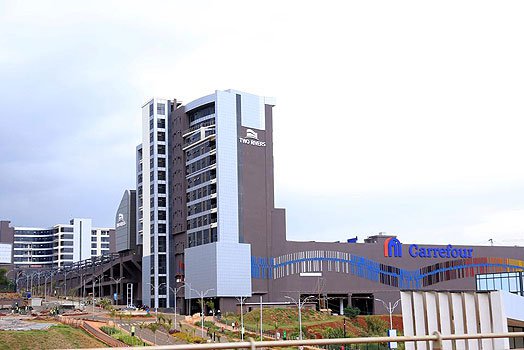 They are being drawn by brands making the first entry into the Kenyan market and entertainment. Others just want to see the much-hyped mall.

The mall’s dancing musical fountains and laser shows are a first for Kenya.

International fashion brands that have set foot in Kenya through the mall include Turkish Clothing line LC Waikiki and Austria based jewellery multinational Swarovski.

Centum’s chairman Chris Kirubi says that the mall is designed to position Kenya as East Africa’s shopping hub and halt the exodus of locals in search of shopping in foreign countries.

The mall houses 10 banks, more than 20 restaurants and over 200 shopping stores. They include Chandarana, Nike Nove, Coffee Roaster and The Designers Studio.

In phase two city lodge hotel, apartments and office blocks will be built.

“Two Rivers has brought South Africa and Dubai to East Africa by bringing in brands that have people boarding the plane to access them.

So far, investments totalling to Sh27 billion have been injected into this development to make it world-class,” said Mr Kirubi.

Plans are underway to open an outlet at upmarket The Hub mall in Karen and in the central business district before the year ends.

“We are targeting 140 million consumers across East Africa alone and to have 1,500 stores by the end of 2023,” said Kremena Pencheva, LC Waikiki’s country manager.

The anchor tenant of Two Rivers, French retailer Carrefour, opened the second outlet on Wednesday. It will be a new competition especially to the market leader Nakumatt.

Carrefour is the world’s second-largest supermarket chain after Wal-Mart. It opened the first outlet in May last year at The Hub, Karen.

The mall which is located at the border of Nairobi and Kiambu Counties is slowing opening up the area to other major developments.

The Runda suburb, home to the development, has been named among the global real estate hotspots most likely to attract dollar millionaires keen to buy property in 2017.

Share thisFacebookTwitterPinterestEmailWhatsApp The Two Rivers Mall along Limuru Road. PHOTO | FILE VISITS TO TWO RIVERS MALL SWELL TO 200,000 Kenya’s largest shopping mall, Two Rivers, launched a fortnight ago has welcomed more than 200,000 visitors. They are being drawn by brands making the first entry into the Kenyan market and entertainment. Others just want