Video:Anne Waiguru reveals forces that pushed for her ouster 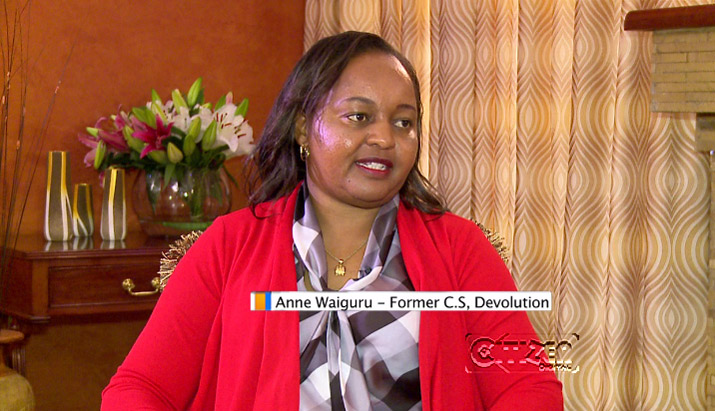 Anne Waiguru reveals forces that pushed for her ouster

Former Devolution Cabinet Secretary Anne Waiguru has revealed that political leaders and cartels that were unhappy with her push against corruption pushed for her removal from office.

In an exclusive interview with Citizen TV, Waiguru said the fight against corruption turned personal with unnamed forces targeting her and her family instead of focusing on the truth about the loss of Sh791 million at the National Youth Service (NYS).

“There have been no personal attacks on other government officials linked to corruption today, but mine was different. My character was targeted with some unknown people hacking my children’s Facebook accounts,” stated Waiguru,

“From June 26th to November 2nd 2015 there were headlines that were about me and not NYS or the loss of Sh791 million. It is evident that there were concerted efforts from political quarters and cartels affected by my whistleblowing and my fight against corruption at the NYS to push me out of office.”

She revealed that her decision to resign was well-advised, adding that her health has improved ever since.

“For the past one month I have been resting and minding my own business. I am much better than I was while in office. Of course I cannot go back to how I was but I have recovered and with time and change of lifestyle I will be okay.”

Asked why she could not take responsibility as the Devolution Cabinet Secretary over corruption allegations at the ministry, Waiguru said it is not a requirement in the Constitution that she resigns for someone else’s wrongdoings.

“As cabinet secretaries, we take credit when the ministry reaches certain milestones because we are involved in the crafting of policies and implementing them. We however do not take part in corruption as a group and so it would be unfair to resign over other people’s actions.”

She explained that people are not arraigned in court as institutions but as individuals noting that she would not resign because another person in the ministry had been implicated in corruption.

Waiguru clarified that she did not step aside, but resigned, because she had not been implicated in any scandal.

“Stepping aside is different from resigning. I did not step aside because I was not implicated in any corrupt dealings. I was a whistleblower and invited the Directorate of Criminal Investigations (DCI) to carry out investigations in the ministry.”

She said the DCI investigations had implicated other people involved in corruption at the NYS adding that recommendations made by EACC were also taken into consideration and those mentioned arraigned in court.

“I wonder how I turned from being a whistleblower to being a prime suspect in the loss of Sh791 million at the NYS.”

LOWEST MOMENT OF HER LIFE

The former CS revealed that the raid by the Ethics and Anti-Corruption Commission (EACC) at her home marked the lowest moment of her life.

“The raid was one of my lowest moments. I got a call that the media were coming to my house and EACC detectives were on their way there.”

“They were so professional though. My lawyers, who were present at my home, were shown the search warrant before the officers went ahead to carry out the search.”

She however revealed that nothing was found in the house expect documents and electronic devices.

“Other than the loose change that we use in the house there was no money found They just carried away electronic devices that had electronic data like flash disks, laptops, and iPads.”

“I don’t know what they were looking for. I just know that they said I was a person of interest together with others who were running NYS.”

She denied claims that EACC had found millions of shillings in her house saying if that was true the media present would have revealed the same.

Waiguru noted that the government’s support accorded to her during that moment was a move aimed at supporting her as a whistleblower and not a person, saying she does not have any special relations with President Uhuru Kenyatta.

She said it is saddening that the country has set a dangerous stereotype against women that they cannot succeed without having special relations with people in positions of authority.

“We need to move away from the mentality where women are thought to only make it to big offices or move up in ranks because they have special connections with those in power.”

Video:Anne Waiguru reveals forces that pushed for her ouster Reviewed by samrack on January 11, 2016 .

Anne Waiguru reveals forces that pushed for her ouster Former Devolution Cabinet Secretary Anne Waiguru has revealed that political leaders and cartels that were unhappy with her push against corruption pushed for her removal from office. In an exclusive interview with Citizen TV, Waiguru said the fight against corruption turned personal with unnamed forces targeting her and her