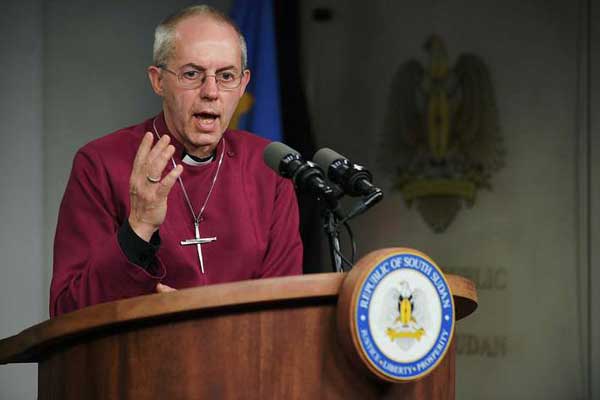 Archbishop of Canterbury Justin Welby at a past event. The Anglican church has suspended the Episcopal Church, its US branch, for three years for approving gay marriages. AFP PHOTO | CARL DE SOUZA

LONDON
The Anglican church on Thursday said it had suspended the Episcopal Church, its US branch, for three years after it approved ceremonies for same-sex marriages.

The issue has long strained ties within the estimated 85-million-strong Anglican Communion, which includes more liberal members such as the United States and Britain, and conservatives such as Nigeria and Kenya.

The Episcopal Church last year approved ceremonies for same-sex marriages, shortly after the Supreme Court legalised the practice across the United States.

“The traditional doctrine of the church in view of the teaching of Scripture, upholds marriage as between a man and a woman in faithful, lifelong union,” said a statement from a meeting this week of 38 Anglican primates.

“Given the seriousness of these matters we formally acknowledge this distance by requiring that for a period of three years The Episcopal Church no longer represent us on ecumenical and interfaith bodies,” the statement added.

The primates, chief bishops or archbishops of churches within the Anglican Communion, also said the Episcopal Church “will not take part in decision making on any issues pertaining to doctrine or polity”.

The religious leaders had gathered in England at the invitation of Anglican Communion leader Justin Welby, Britain’s Archbishop of Canterbury, to discuss key issues, and he is expected to hold a news conference at the end of the meeting on Friday.

A website for the gathering said the decision to suspend the Episcopal Church had been leaked early, prompting them to issue a statement ahead of the news conference.

Declining church attendance in more liberal countries has put pressure on Anglican leaders to be more accommodating on social issues such as same-sex marriage, but that has put them at loggerheads with conservatives.

Homosexuality is either illegal or strongly taboo in several countries with large Anglican congregations.

In 2014, Welby said it would be “catastrophic” if the Church of England, mother church of the Anglican Communion, accepted gay marriage, arguing that the association could lead to the slaughter of Christians in countries such as Pakistan, South Sudan and Nigeria.

VIDEO:Anglican church suspends US arm over gay marriage Reviewed by samrack on January 15, 2016 .