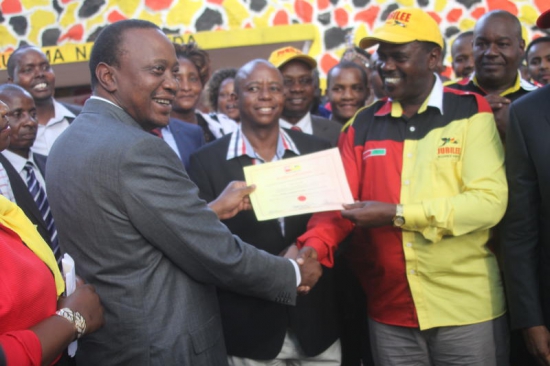 The CS was an ODM MP for Kajiado Central Constituency before relinquishing the position after the President appointed him to the Cabinet on December 2 last year. Speaking in Maasai during the ceremony, Nkaiserry said the Head of State gave him the Cabinet position and it was only fair for him to support the President’s candidate. He urged Kajiado Central voters to appreciate the President’s gesture by electing Mr Tutui on March 16. “I appeal to you to show appreciation to the President for appointing one of your own to the Cabinet by electing his candidate,” he stated. See also: Low voter turnout, bribery allegations mar Homa Bay by-election Nkaiserry asked Kajiado Central residents to support the government to spur development in the area. The President urged voters and candidates who lost in the party primaries to elect Tutui to realise meaningful development. It was the first time Kenyatta was visiting JAP offices since the party was formed. Leader of Majority in the National Assembly Aden Duale expressed confidence that Tutui would be the first candidate elected to Parliament on a JAP ticket. “We are positive that Tutui is the right man for the job. We are not doing any guesswork with this by-election,” he added. He assured that the leaders have a vision for the party. “We will ensure that Kenyatta is re-elected as President in 2017 on a JAP ticket,” stated Mr Duale. Party officials led by vice chairman David Murathe, Kericho Senator Charles Keter among other Members of Parliament were present. “We are the people to watch, we are destined for victory because the people are with us,” said Mr Murathe.