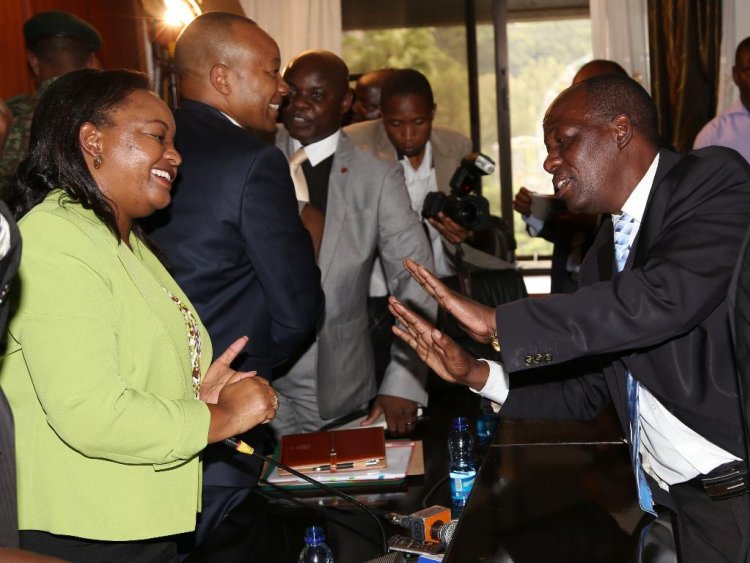 NO WRONGDOING: Former Devolution CS Anne Waiguru with Juja MP Francis Waititu after she was grilled by the Parliamentary Finance Committee over graft allegations at the NYS on September 7, 2015

Ethics body says probe has not found any evidence

THE Ethics and Anti-Corruption Commission has cleared former Devolution Cabinet Secretary Anne Waiguru of any wrongdoing in the Sh791 million NYS scandal.

In a confidential letter obtained by the Star dated February 4, 2015, and signed by the EACC chief executive officer Halake Waqo, the Commission told Chief of Staff and Head of Public Service Joseph Kinyua that it had found no evidence of Waiguru’s wrongdoing.

“The Commission has conducted investigations on various allegations touching on the National Youth Service and the Ministry of Devolution and National Planning.

“So far, our investigations have not established any evidence to warrant an adverse recommendation against the former Cabinet Secretary Waiguru.

This is forwarded to you for information,” said the two-paragraph letter, reference EACC.6/2/3 (145). The EACC wrote to Kinyua because at the time of the allegations against her, she was an employee of the Presidency.

Yesterday Waiguru said although she was unaware of the development, she was happy that “the truth had finally come out”.

“I’m sure I will be receiving communication on the matter through official channels. I’m however grateful to God that the truth is finally out. This gives me courage and strength,” said Waiguru.

Waiguru resigned under tremendous external pressure and on doctor’s orders to take on lighter duties. The clearing of her name will certainly energize her quest to succeed Evans Kidero as Nairobi governor.

Although she has not formally announced her candidature, the former minister has been holding meetings with women’s groups in Nairobi who are pressing her to enter the race.

Former PS Peter Mangiti and former NYS director-general Nelson Githinji were charged with attempting to induce the senior deputy director-general in charge of administration, Adan Harakhe, “not to follow up the matter relating to the conspiracy” to steal money from the government.

The two senior officials were among 26 suspects charged over the loss of Sh791 million from the NYS. In the case, Waiguru was listed as the first prosecution witness.

The prosecution alleged that Mangiti and Dr Githinji threatened their colleague, also a prosecution witness, with dire consequences unless he dropped his pursuit of the matter.

They denied that between May 27, 2015 and June 19, 2015, in Nairobi, they jointly attempted to induce Harakhe “to fail in his duty by dissuading, threatening and intimidating him with consequences should he continue following up a matter relating to the conspiracy to steal Sh695,400,000 with the Directorate of Criminal Investigations”.

The EACC had obtained court orders and search warrants for the residences.

They raided and searched the homes of Mangiti, Githinji, Harake, director of Administration at the Devolution ministry Hassan Noor Hassan, and seven other suspended senior officials.

The DPP had recommended the recording of a statement from Waiguru, Family Bank officials and Central Bank of Kenya officials alongside 22 NYS and Devolution ministry staff.

NO WRONGDOING: Former Devolution CS Anne Waiguru with Juja MP Francis Waititu after she was grilled by the Parliamentary Finance Committee over graft allegations at the NYS on September 7, 2015 [VIDEO] EACC clears Anne Waiguru in Sh791 million NYS scandal Ethics body says probe has not found any evidence THE Ethics and Anti-Corruption Commission