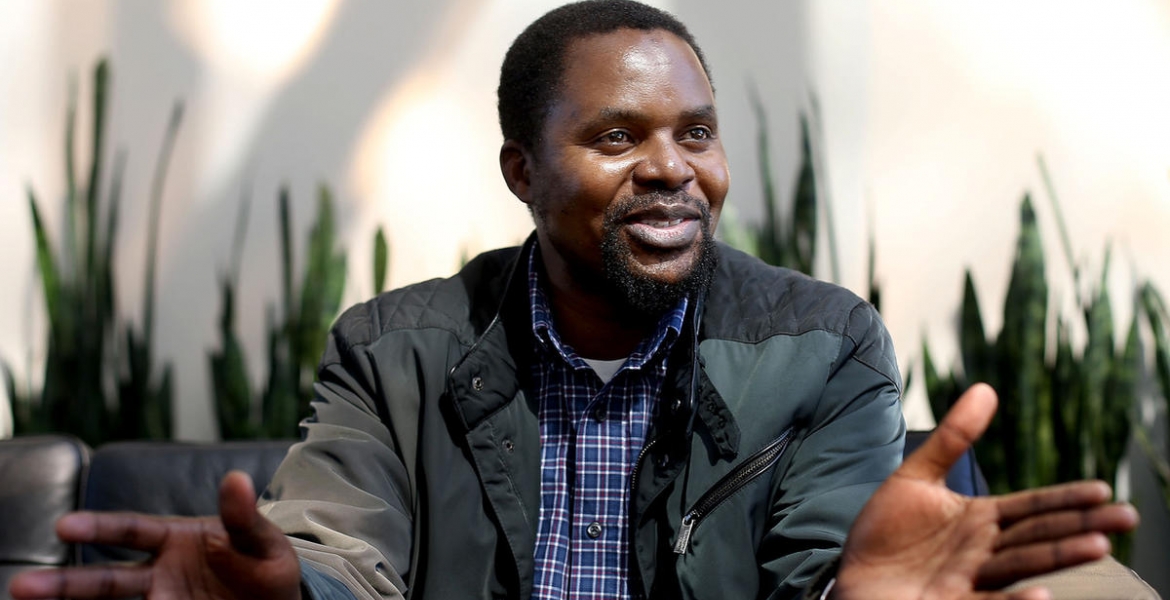 Amram Musungu walked dozens of miles every day to attend school in Hamuyundi, Kenya. He slept on banana leaves on the floor of his village hut. And he didn’t own a pair of shoes until he was 15 years old.

But that didn’t stop him from changing his future.

“I wanted to be different. I wanted to help,” Musungu, who lives in South Salt Lake, told the Deseret News.

Now, with dual-citizenship in Utah, the 39-year-old Mormon auditor is running for president of his native homeland.

It’s something he’s always believed he would do, and in a roundabout way, he’s spent his entire life preparing for it.

“I will be the best president the country has ever had,” he said with confident eyes.

Rising out of poverty and circumstance himself, Musungu said he hopes to inspire Kenyans to work hard to get control of their country.

“I’m in this race to win,” he said, adding that it might be easier to stay in Utah, work his job and spend time with his family. “But I want the best for Kenya, and every Kenyan should be proud of their country.”

Musungu’s own pride for Kenya was fostered from a very young age.

It wasn’t a requirement to attend school — which was really just a chalkboard nailed to a big shade tree on the outskirts of the village — but Musungu knew it would make his life better and more enriched. He worked very hard to maintain his grades and attend every day of school, even if it took him more than an hour to get there and back each day.

Musungu ended up meeting Mormon missionaries in his country in 1992 and recalls Arizona-born Elder Russel Price as “the first white person I met who would speak to me.”

“It was as if we had known each other many years,” he said.

Though Musungu was raised in a devout Protestant home, the then-young teen was quickly converted and began sharing his love of the gospel with others. By age 17, special permission was made to call him on his own mission for The Church of Jesus Christ of Latter-day Saints, and he served in his native land for 27 months.

“I wish I could’ve served more,” Musungu said. “I loved what I was doing.”

After his mission, however, Musungu wanted to further his education, and his friends and neighbors made it possible for him to fly to Utah, with little more than $50 in his pocket, and attend LDS Business College.

Musungu later went to the University of Utah and Westminster College, achieving multiple degrees and certifications to make him marketable as a financial auditor/accountant.

He married, after converting his wife to Mormonism, and they have two children, ages 8 and 4.

And there isn’t a day that goes by that Musungu isn’t praying for opportunities to serve others and teaching his children to do the same. It isn’t lost on him that running for president of a struggling nation will basically be doing the same.

“There is so much to do and so many people we can reach who need our help every day,” Musungu said, adding that the benefits of serving come back tenfold. “It makes my life easier, I am happier, my life is more rewarding. Helping someone, for me, is a big accomplishment in my day.”

Running for president of Kenya, Musungu said, “is not something that just came up.”

And he has plans to fix them all — over time and with the help of the people.

Like every decision Musungu makes, he lets God guide his thoughts, and he firmly believes the Lord wants him to return to Kenya to make a difference.

His grass-roots campaign is already off the ground in Kenya — a country of 46 million people. Through mixed-media messages, he is reaching small-town, disadvantaged groups of men, women and children who stand to benefit most from his ideas.

Musungu said he plans to soon name his female running mate, which he hopes will solidify his claims to help women have a voice in Kenya.

“I want every Kenyan to have a better life,” he said.

At the root of Musungu’s efforts are his intensely high morals and a push for transparency and integrity that hasn’t been found in the region for some time.

Musungu’s attempt at the highest office in Kenya won’t be easy. He’s facing seven other candidates, some of whom belong to the most corrupt tribes in Africa and have decades of government control under their belts. But the country, Musungu says, is ripe for change.

“The nonsense is over,” he said.

Musungu not only needs the support of Kenyans for the Aug. 8 election, but also of his fellow Utahns, whom he hopes will help fund his efforts to get there, perhaps out of business interests in the country or to help fellow men.

“Some would call this a long shot, but it’s a real shot,” he said.

Musungu, a former member of the Mormon Tabernacle Choir and leader among the local African refugee community, said he’s learned much from the people of Utah and wants to spread what he’s learned to the people of Kenya, even if that includes sharing the gospel along the way.

In fact, he started the local Swahili branch of the LDS Church, serving many people there, helping them learn English, but also leading to the baptisms of nearly 300 people. He believes his calling now is “to serve and unite Africa.”

“The gospel has helped me to understand that nothing is impossible as long as it has to do with blessing the lives of others,” Musungu said, adding that he only wants to spread peace and prosperity, giving the people stability and circumstances to help them thrive.

He feels he has a moral obligation to the people there.

“I love Kenya,” Musungu said. “It is a very good country, and Kenyans have a good reputation wherever they go. It is selfish for me to stay in America.”

USA-Based Mormon Amram Musungu Running for President of Kenya Amram Musungu walked dozens of miles every day to attend school in Hamuyundi, Kenya. He slept on banana leaves on the floor of his village hut. And he didn’t own a pair of shoes until he was 15 years old. But that didn’t stop him from