US wants Uhuru and Raila to hold talks on repeat poll 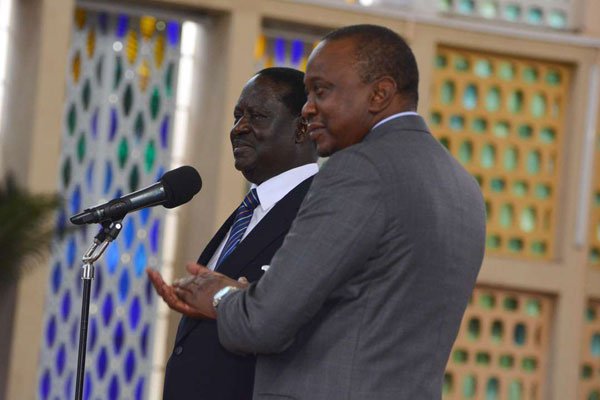 US wants Uhuru and Raila to hold talks on repeat poll

The US has reached out to President Uhuru Kenyatta and his rival Raila Odinga to resolve sticky issues around the October 17 repeat elections .

A top official in President Donald Trump’s administration said “all eyes were on Kenya” as the Independent Electoral and Boundaries Commission (IEBC) invited President Kenyatta and Mr Odinga to a make-or-break meeting over the elections.

Principal Deputy Assistant Secretary at the US government’s Bureau of African Affairs Donald Yamamoto said the US had already reached out to top political leaders in the country and informed them that the world is watching.

Besides regular statements made by the US ambassador to Kenya, Mr Robert Godec, concerning the coming election, this is probably the first time that a senior government official in the Donald Trump-led government has spoken publicly about it.

“Kenya’s on  — probably on — the threshold of a great election on October 17, but it’s the issues that we need to focus on and work with … the eyes of the world and the US government are on you, on Kenya,” he said.

Mr Yamamoto made the comments while giving a speech on advancing common interests of US-African partnerships at the US Institute of Peace based in Washington, on Wednesday.

The Bureau of African Affairs falls under the US Department of State and has the responsibility of advising the Secretary of State on matters touching on Sub-Saharan Africa.

“We’re not going to take our eyes away from it (Kenya). Kenya matters. If our largest embassy is in Nairobi, Kenya, that means we have a stake in that country, and Africa has a stake, and this government’s looking at where the trend lines will go after October 17,” said Mr Yamamoto.

America has huge stakes in Kenya, varying from economic, social, political and security matters, especially in the fight against terrorism, money laundering and drug trafficking.

At the height of the 2007 post-election violence, the US was at the forefront in pushing for mediation between President Mwai Kibaki of PNU who had been declared winner and his main opponent Raila Odinga who vied through ODM.

The country dispatched its then-Secretary of State, Ms Condoleezza Rice, to attempt to broker a deal between the two sides so as to stop the violence, which eventually saw more than 1,100 people lose their lives and thousands others left homeless.

As Mr Yamamoto spoke, sources at the IEBC said the commission has  scheduled a consultative meeting between President Kenyatta and Mr Odinga on Wednesday to thrash out issues that the National Super Alliance has raised.

The meeting, it was said, will take place at the Bomas of Kenya, which served as the commission’s National Tallying Centre .“I am positive that we are going to sit down and for the sake of the country, we shall come up with a solution to any issues that might be a roadblock to the holding of the elections on October 17,” IEBC chairman Wafula Chebukati said last week, before the commission confirmed the sending of the invites to the two protagonists on Twitter on Friday.

In the Wednesday meeting, the IEBC hopes to go through Nasa’s demands while taking into consideration the Jubilee Party’s views.

It is also at this meeting that the IEBC is expected to tell the candidates if there will be a change of the elections date following a request by French firm Safran Morpho for more time to re-configure the 45,000 voter identification and result transmission kits.

The commission has prepared a 12-page agenda document for the meeting in which they have promised to re-vet returning officers, audit their servers and improve on the ballot paper printing tender.

To ensure the integrity of the ballots, the IEBC has proposed a tracking system from the source to the warehouses, until the polling stations, data which will be available to the two rivals, while reducing the extra ballot paper provision that led to an extra 1.2 million in the August 8 poll.

Nasa has demanded, among other things, the sacking of IEBC chief executive Ezra Chiloba, commissioners Boya Molu and Abdi Guliye and nine other senior officials, the cancellation of the Dubai-based Al-Ghurair tender to print the ballots and an audit of the IEBC server before the polls.

“Kenyans are coming for you. Salvage what you can and run. There will be no election with you in office,” Mr Odinga told the 12 IEBC officials on Sunday.

President Kenyatta’s Jubilee Party, on the other hand, has toned down on calls for change of staff at the commission, instead demanding that the IEBC be granted the independence to choose its staff and make managerial decisions without interference.

“We must give IEBC the space to run this election. We must respect their independence … It is not in our purview to decide staff and other administrative issues for the IEBC. That is the job of the commissioners,” said Deputy President William Ruto after a meeting with the IEBC last week.

A joint meeting between the two parties planned for Tuesday last week aborted after Mr Odinga, who was accompanied by his running mate Kalonzo Musyoka, and co-principals Musalia Mudavadi and Moses Wetang’ula walked out when Mr Ruto failed to arrive for the 11am meeting.

The DP, who arrived later, said his tardiness was due to a Jubilee Parliamentary Group meeting he had attended.

US wants Uhuru and Raila to hold talks on repeat poll Reviewed by samrack on September 18, 2017 .

President Uhuru Kenyatta with Nasa leader Raila Odinga when they attended Mzee Jomo Kenyatta’s 38th Anniversary Memorial Service at the Holy Family Minor Basilica, Nairobi August 22, 2016. The US has reached out to President Kenyatta and his rival Raila to resolve sticky issues around the October 17 repeat elections. PHOTO | JEFF ANGOTE |