Parliament will be suspended just days after MPs return to work in September – and only a few weeks before the Brexit deadline. Boris Johnson said a Queen’s Speech would take place after the suspension, on 14 October, to outline his “very exciting agenda”. But it means the time MPs have to pass laws to stop a no-deal Brexit on 31 October would be cut. House of Commons Speaker John Bercow said it was a “constitutional outrage”. The Speaker, who does not traditionally comment on political announcements, continued: “However it is dressed up, it is blindingly obvious that the purpose of [suspending Parliament] now would be to stop [MPs] debating Brexit and performing its duty in shaping a course for the country.” Labour leader Jeremy Corbyn said: “Suspending Parliament is not acceptable, it is not on. What the prime minister is doing is a smash and grab on our democracy to force through a no deal,” he said. He said when MPs return to the Commons next Tuesday, “the first thing we’ll do is attempt legislation to prevent what [the PM] is doing”, followed by a vote of no confidence “at some point”. 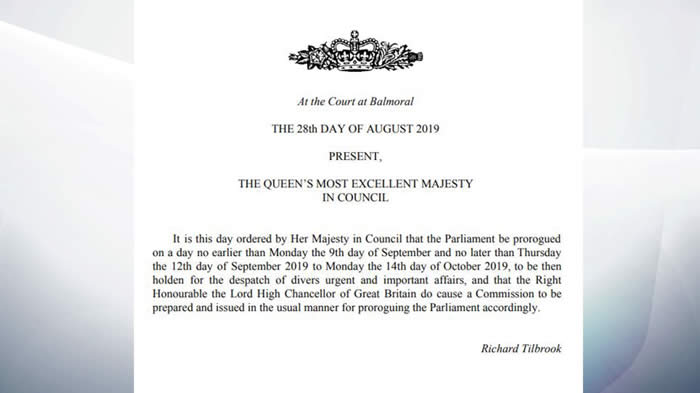