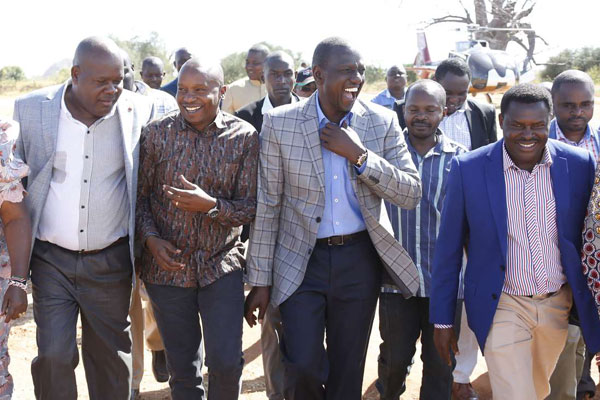 Deputy President William Ruto and Tharaka-Nithi leaders during an event to launch the construction of Kamaguna Secondary School in the county. Mr Ruto and President Uhuru Kenyatta are said to have agreed that the country is headed in the wrong direction and this needs to be addressed. PHOTO | DPPS

President Uhuru Kenyatta and his deputy William Ruto held a crisis meeting on Friday to stabilise the troubled Jubilee ship after weeks of infighting that had seen their associates publicly take on each other to the chagrin of the public.

The mid-morning to early afternoon meeting at State House, attended only by a handful of trusted handlers, occasioned changes on the programme at Pumwani Primary school where the DP had been scheduled to preside over a fundraiser.

Mr Ruto was scheduled to go tot the fundraiser at 11am, but the last minute communication saw the programme amended to 5pm when he arrived.

The meeting, said to be one of its kind in as many weeks to specifically deal with party politics and harmony, resolved to call a Parliamentary Group meeting on Tuesday to address contentious issues.

It is already bearing fruit as Mr Ruto recalled his lieutenants from active combat with the President’s men. The Nation has learned that the two were in agreement that the country was headed in the wrong direction given the high octane politicking.

Equally, there was raging fear in the corridors of power that the ruling party was on the edge of crumbling under the weight of internal feuding emanating from resistance of lifestyle audits and a perception among Mr Ruto’s foot soldiers that a clique of bureaucrats around Mr Kenyatta was actively working to block his State House bid in 2022.

Before the truce, Mr Ruto had tactfully took on his boss in an unprecedented bold move that saw Senate Majority Leader Kipchumba Murkomen deliver the message in a televised talk show last Sunday.

It was Kapseret MP Oscar Sudi who fired the first salvo in the wake of the President’s call for lifestyle audits.

He challenged him to start with his own father Jomo Kenyatta, the founding president. It did not take long before Aldai MP Cornelly Serem, in a parliamentary committee session, sought to implicate Mr Muhoho Kenyatta, the President’s younger brother in an illegal sugar importation saga in what looked like coordinated warfare.

“Their messaging to the President’s camp was clear, that if you want to accuse us of corruption, come with clean hands and let us engage. It has worked for them, at least for now. My honest opinion though is that both sides have benefited from corruption and knowingly allowed it to thrive yet it is in their best interest to deal with it.”

“For Kenyatta, there is the question of legacy and Ruto, he will not have the moral authority to ask for votes if a government in which he served as number two in command is associated with the morass,” he said.

The development follows a series of consultative meetings both at Weston Hotel on Wednesday by Rift Valley MPs and another one the same day at Mr Ruto’s Karen offices with key leaders from the region where he is said to have asked them to “avoid making reckless statements henceforth”.

“Let us tone down the rhetoric. Let us focus on service delivery for Kenyans and use President Kenyatta’s legacy to launch the DP’s 2022 ambition,” he said.

It was the same unity gospel by the Senate Deputy Speaker and Tharaka-Nithi lawmaker Kithure Kindiki. “The party is united and what has transpired is normal internal democratic debate in a vibrant vehicle. It has not derailed our unity and going forward, I urge my colleagues in the rank and file of the party to embrace one another. We have the President’s Big Four agenda campaign to implement and time is not on our side,” he said.

Finding himself in a tight spot against operatives who cannot reconcile themselves to a possible Ruto presidency, the DP is said to be keen not to directly antagonise the President as he thinks doing so may boomerang on his own ambition.

Earlier, Mr Murkomen admitted there are genuine concerns about disunity in government and didn’t mince his words when he said: “We are concerned about the existence of a small wing of individuals who occupy high offices spending their time trying to plant seeds of discord in the Jubilee Party. They are people in government, the Office of the President with the desire to break Jubilee to create a wedge between the President and his deputy.”

The same week also saw a group of former MPs from central Kenya meet Mr Ruto’s nemesis Opposition chief Raila Odinga pushing the political temperatures to the boiling point. A majority of the former lawmakers have an axe to grind with the DP as they believe he had a hand in their loss at the Jubilee primaries ahead of the August 8 polls.

“Our message to the President is that he would rather lose the big agenda but win the war on corruption. If he is able to slay the runaway corruption monster, he will have secured his legacy. Otherwise the Big Four agenda will be a futile effort,” said former Kigumo MP Jamleck Kamau who attended the meeting.

Multiple interviews with some members of the DP’s camp revealed that the rare interview did not occur in a vacuum. It was a well thought-out step that took meticulous planning with a thorough analysis on scenarios of possible outcomes and the political risks involved.

With a clear determination to make it known to their ‘detractors’ that they have options and that they knew what they were up to, and that their man was no pushover, the final touches to plan was drawn on Sunday afternoon after a fundraiser in Kapseret, Uasin Gishu, an event full of political undertones presided over by 2013 presidential contender Peter Kenneth. The same day Mr Murkomen spoke.

A leading advisor with knowledge about the planning told the Sunday Nation that after deep thought, the only risk identified was the likely push to strip Mr Murkomen of his majority leader seat in the Senate.

“Take it from me, nobody can just wake up and say the things he (Mr Murkomen) did. You only do so if some powerful person has your back,” the source said.

Indeed this came to pass after a group of Rift Valley MPs led by Cherangany MP Joshua Kutuny, Mr Serem and some luminaries from Central who were not in the picture started baying for the blood of the Senator from Elgeyo-Marakwet. It would take Mr Ruto’s direct intervention for them to back off.

“… some were lying to the President that implementing the Big Four agenda is all that mattered,” Mr Murkomen said pointing out that the lifestyle audits were as good as a road side declaration the President picked from Machakos Governor Alfred Mutua who had days before Mr Kenyatta called for such an undertaking among senior government officials.

He said the declaration by Mr Kenyatta was targeted at his deputy. “The assumption that if you own a car, a house you must be corrupt, what if you own a bank?” The Kenyatta family owns a bank, Commercial Bank of Africa through Enke Investments Ltd.

Mr Murkomen had also warned that if the President and his deputy were not going to agree that the direction the squabbling was taking was not useful to Jubilee and their legacy, “then as they say if you do not fix a crack, you will be forced to build the entire wall”.

Mr Kenyatta has since responded to the mention of his brother in regards to the ongoing crackdown on contraband sugar.

“I have full confidence in the agencies that we have to do their job. I have said if he is guilty, let the law take its course, what he is the problem? We will protect the innocent and prosecute the guilty. Let’s leave the politics out of this game and do what is necessary for our country,” Mr Kenyatta said.

The DP’s camp still says that even if Mr Kenyatta will do their bidding in the 2022 presidential poll, they suspect the support may be lukewarm. Mr Kenyatta is on the record reiterating his support for his principal assistant in the next polls. With the reality of a lame duck president that may set in during his last days in office, the support even if unwavering at personal level may however not translate into overwhelming vote.

A shrewd, disciplined and hard campaigner, the DP is reportedly alive to this fact and his strategists say is seeking to directly reach out for support in the President’s home turf.

Deputy President William Ruto and Tharaka-Nithi leaders during an event to launch the construction of Kamaguna Secondary School in the county. Mr Ruto and President Uhuru Kenyatta are said to have agreed that the country is headed in the wrong direction and this needs to be addressed. PHOTO | DPPS  Uhuru, Ruto hold crisis meeting