Received credentials from the incoming Namibian High Commissioner, Theresia Samaria and Ambassador Vakhtang Joashvili of the Republic of Georgia

The envoys were Namibian High Commissioner Theresia Samaria and Ambassador Vakhtang Joashvili of the Republic of Georgia.

He expressed gratitude, saying that two countries have strong partnerships and he looks forward to deepening co–operation during the tenure of the new High Commissioner. 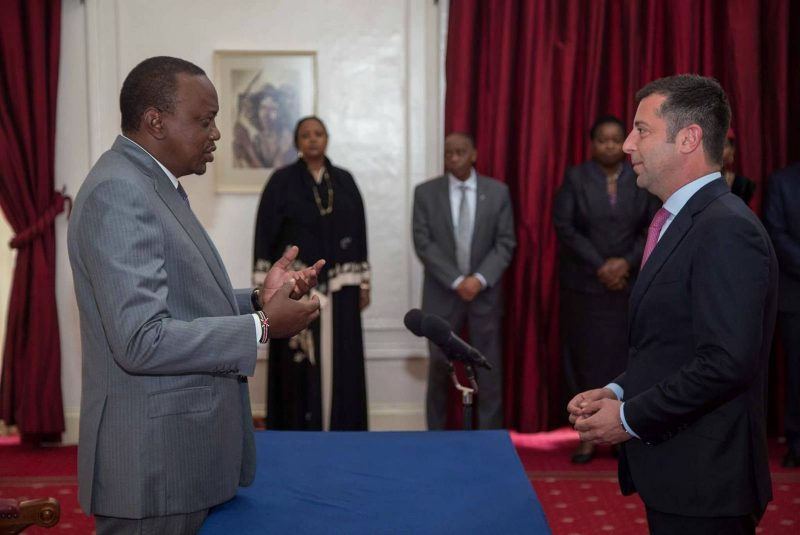 Welcoming the new Georgian Ambassador to Kenya, President Kenyatta said the two countries would continue partnering and working together towards achieving global peace.

The new Namibian High Commissioner Ambassador Samaria said Kenya has been a key partner to Namibia, having helped the country gain its independence.

“After independence, Kenya has continued to support Namibia in key areas of economic growth especially in education and trade,” said the new High Commissioner.

The new Georgian ambassador Joashvili commended Kenya for the pivotal role it has continued to play in ensuring peace, security and stability in the Horn of Africa and the Great Lakes region.

The new Ambassador said the Georgian Government attaches great importance to the development of the African continent, which attests to its decision of opening an embassy in Kenya.

“The participation of Georgia in peacekeeping operations in Africa is a reflection of how it values its partnership with this continent,” said Ambassador Joashvili.