Uhuru, Raila to mobilise supporters to register as voters 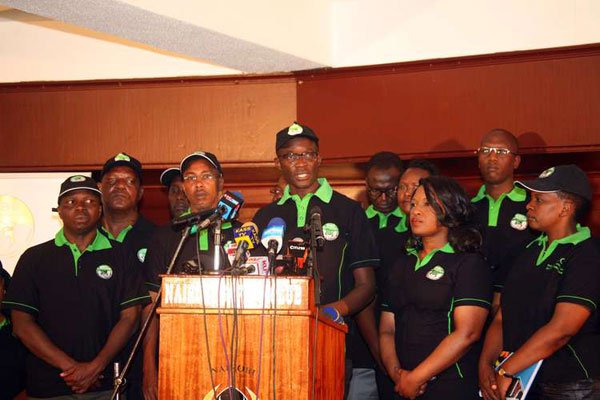 Uhuru, Raila to mobilise supporters to register as voters

A major drive to register voters starts on Monday, with both President Uhuru Kenyatta and Cord leader Raila Odinga expected to mobilise their supporters to turn out in large numbers and enlist in readiness for the August General Election.

The Independent Electoral and Boundaries Commission (IEBC) launched the registration campaign on Sunday and warned that those who will not have registered by February 14 will have no other opportunity to do so and will, therefore, not be eligible to cast their ballots in the next elections.

Addressing a press conference at the Lilian Towers in Nairobi, Mr Chiloba said that although nine million Kenyans are projected to have registered for identity cards and are yet to be listed as voters, the commission is targeting to sign up a maximum of 6.1 million voters.

“Information we received from the National Registration Bureau indicates that by November 2016, over nine million Kenyans had been issued with national identification cards but remained unregistered as voters,” he said.

State House spokesman Manoah Esipisu said President Kenyatta would lead the Jubilee team in rallying Kenyans to register. However, he did not give details about the dates and venues where the President will be mobilising wananchi to register.

“A full programme is being worked out because the President has been out of the country. It will be released in time,” he said in a telephone interview with the Nation.

“The story of the tyranny of numbers will be gone once everyone is registered,” said the MP.

On Monday, Mr Odinga is scheduled to visit Kibra, Kawangware, Dagoretti, Westlands, Ruaraka, Embakasi, Dandora and Kayole, among other places to urge opposition supporters to list.

Mr Chiloba said that unlike in the last voter registration, when the commission failed to meet its target, this time round it has launched massive media campaigns to sensitise potential voters to register.

“The commission estimates to receive six million additional voters in the best case scenario and four million voters in worst case,” he said.

Some 7,793 biometric voter registration kits will be used during the campaign to be executed in over 24,000 polling centres around the country.

Mr Chiloba said the available kits were enough to register all the targeted voters and that a fair distribution formula, taking into account an area’s population and land mass had been applied to ensure no one is disadvantaged.

He said that in the last registration, conducted in February last year, the registration kits were not optimally used due to budget constraints.

This time , the criterion used in the distribution of the kits is meant to ensure that potential voters are not discouraged by long distances to registration centres. Each County Assembly Ward (CAW) will have a minimum of three kits and maximum of 10. A list of how the kits are distributed across the country can be found on the commission’s website.

“The list will show the distribution of kits per CAW, constituency and county,” said Mr Chiloba.

President Kenyatta and Mr Odinga last week met hopefuls seeking to contest for political seats on Jubilee and Cord tickets and challenged them to mobilise their supporters to register in large numbers.

“We must go out there and mobilise each and everyone of us who has not registered to do so,” President Kenyatta said when he addressed a gathering of Jubilee aspirants at the Safaricom Stadium, Kasarani, on Friday.

He said that electoral areas that register the highest numbers of new voters would be rewarded.

Two days earlier, Mr Odinga had met the National Supper Alliance (Nasa) aspirants together with other opposition chiefs and urged them to mobilise supporters to register.

“All you need to do is to come out in large numbers and register. Once you are done just leave the rest to me,” said Mr Odinga.

Yesterday, the electoral commission also announced that some changes have been made to some polling centres in northern Kenya, following a recent court decision that affected some constituency boundaries.

And to control “politically” instigated voter transfers, the commission will now require those seeking to change their polling stations to do so at constituency offices.

Uhuru, Raila to mobilise supporters to register as voters Reviewed by samrack on January 15, 2017 .