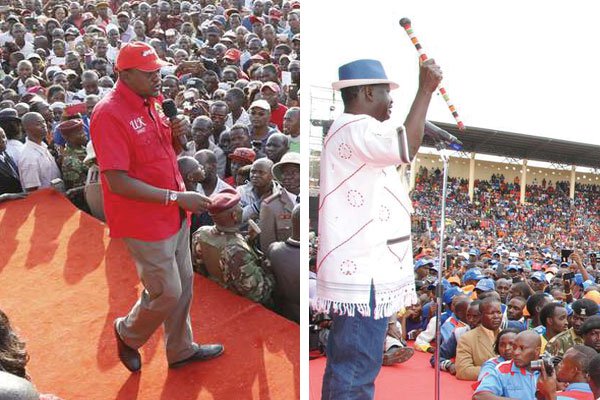 Neither President Uhuru Kenyatta nor his main challenger, Mr Raila Odinga of Nasa, have the magical numbers they need to win the State House race in the first round, a new opinion poll shows.

And with 37 days to the August 8 General Election, eight per cent of the voters interviewed in the survey said they were yet to make up their minds on who they will vote for.

Western Kenya has the highest number of undecided voters at 18 per cent, according to the survey report released Friday by Infotrak Research and Consulting.

It is followed by Rift Valley at 10 per cent and the Coast region at nine per cent.

The Rift Valley has 4.6 million registered voters, which makes it the single most important region for any electoral contest.

The Coast has 1.7 million voters.

Nyanza has the lowest number of undecided voters at three per cent, followed by central Kenya and eastern Kenya at five per cent each.

JUBILEE GOODIES
Ms Angela Ambitho, the MD of Infortrak, attributed the high number of undecided voters in western Kenya to the inroads that Jubilee has been making in that region, including appointments to government positions and launching of various projects.

The number could also mean that the battle for State House will be lost or won depending on voter turn-out and how undecided voters in Western, Rift Valley and Coast vote.

On the popular vote, the report puts President Kenyatta ahead of Mr Odinga, with 48 per cent of respondents saying they would support him, against 43 per cent for the Nasa flagbearer.

This means whoever sways more of the undecided eight per cent stands a better chance of victory.

It is also worth noting that the margin of error for the poll is 2.2 at 95 per cent degree of confidence.

According to the poll, President Kenyatta needs only two per cent of the undecided voters to win a second term outright, while Mr Odinga must convince almost the entire undecided segment to be assured of victory on August 8.

A candidate needs 50 per cent plus one of the votes cast to win a presidential election in round one.

For one to be declared a winner in a presidential election, one must also get at least 25 per cent of the votes cast in at least 24 of the country’s 47 counties.

If a candidate fails to garner the majority of the votes, the top two candidates have to face off in a run-off, which must be conducted within 30 days after the General Election.

It, therefore, means if the election was held today, the country will have to brace itself for the possibility of a run-off.

This week, the electoral commission said there are 19,611,423 registered voters in its register.

CAMPAIGN MODE
The opinion poll came at a time the two main protagonists had intensified campaigns across the country.

On Friday, President Kenyatta pitched camp in Kitui and the greater Ukambani, a region he considers a battleground, while Mr Odinga sought to whip his Migori stronghold to turn out in large numbers on Election Day.

Although the poll shows that Mr Kenyatta and Mr Odinga are clearly ahead of the pack, it also shows that 0.5 per cent of voters would vote for Mr Abduba Dida, who is seeking the presidency for the second time after his first attempt in 2013.

Dr Ekuru Aukot, Mr Cyrus Jirongo and Mr Joe Nyaga, on the other hand, would get the support of 0.1 per cent of the voters respectively.

PARTY POPULARITY
Of the individuals interviewed in the survey, 47 per cent said they closely associated with Jubilee while 43 per cent linked themselves to Nasa.

Five per cent of the respondents declined to reveal their parties of choice while three per cent said they had not decided.

Another three per cent said they were not allied to any party or coalition.

By region, President Kenyatta enjoys the most support in central Kenya at 90 per cent, the highest for any presidential candidate.

The region has 2,910,465 registered voters. Mr Odinga enjoys the highest support in Nyanza at 83 per cent.

Mr Dida enjoys the highest support in northeastern at five per cent.

All the other candidates have no support at all in seven regions.

Analysts were divided on the reason for western’s high number of undecided voters, with Prof Amukowa Anangwe attributing it to the decision by Mr Musalia Mudavadi to support Mr Odinga.

“There is actually a serious worry of voter apathy in the western region, which needs to be addressed urgently,” Prof Anangwe, who teaches at the University of Dodoma, said.

COUNTRY’S FUTURE
Mr Walter Mbindyo, Mr Odinga’s strategist on voter mobilisation, said western Kenya is firmly in Nasa and that it would be the decider of the polls.

Another four per cent did not know which way the country is headed.

Many of those who said the country is headed in the wrong direction blamed the high cost of livingfor their sentiments.

Another seven per cent blamed unemployment.

They all blamed the President and politicians for the direction in which the country is heading.

Those who indicated that the country is heading in the right direction said there is peace (28 per cent), the economy is doing well (12 per cent) and the Executive is working well (11 per cent).

They credited the President and everybody else for their sentiments.

Seven per cent said devolution has made a difference and they credited the Opposition for this.

Looking forward, those interviewed said they would want the incoming government to address the high cost of living (27 per cent), food security (14 per cent) and unemployment (14 per cent).