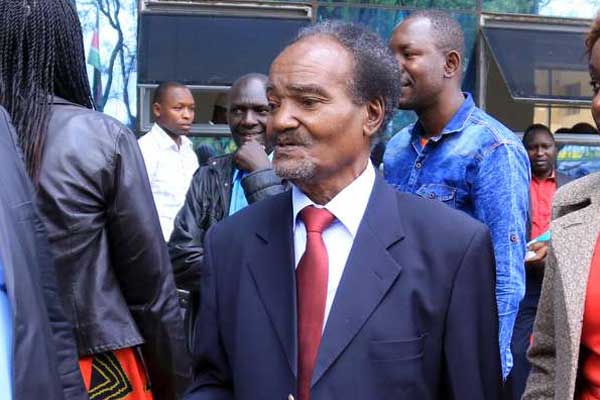 Senator Godfrey Gitahi Kariuki had been under immense pressure to retire from active politics owing to his advanced age and hand over the political mantle to a new breed of leaders.

In November, 2016, however, the Laikipia Senator GG Kariuki publicly defied demands and expectations from a section of his electorate when he announced that he was not about to retire from politics.

Instead, the veteran politician, who commanded a huge political following especially from the elderly in his county, announced that he would be defending his seat in the August 8 General Election.

Even though he maintained a low public profile, the Senator who has served under all the four presidents of Kenya had insisted that he was still strong to serve the county.

“There are many people outside there who discredit me because of my age. It is my experience in politics that matters and not my age.

“I might be looking old and frail but the elephant is still there and standing strong,” the 78 year-old senator said in response amid the pressure to quit politics,” he had said at some point.
PRIMARIES

During the Jubilee Party primaries in April, the senator was floored by Mr John Kinyua.

Mr Henry Kimani was second with 23,583 votes while Mr Samuel Kabuchua was third with 10,382 votes.

Mr Kariuki did not dispute the results. He has kept a low profile since then.

A section of the Laikipia electorate had been urging the long-serving politician to retire from politics arguing that he is frail, as aspirants positioned to take over from him sought his blessings.

But responding to the calls, Mr Kariuki had stated categorically that he was not about to quit politics anytime soon, dismissing critics who had been calling on him to hang the boots.

He had indicated that he would give the people of Laikipia time to look for a suitable replacement when the right time comes.

“I will inform the people of Laikipia the right person to elect when the right time comes,” he stated.

There had been anxiety among the county electorate following the senator’s illness, which stirred a scramble as politicians from the county started positioning themselves to take over from him.

But the Senator declined to do so stating that his illness, that saw him undergo a successful hip surgery had no affected him.

“It is just a matter of time and I will get healed. The illness will not or has not in any way affected my work performance. I am ready to continue serving my people with diligence,” he added.

In his last public appearance in late April, the senator who is one of the longest serving politicians in the country accused prominent and influential individuals in Nairobi of disturbing the peace in Laikipia by allowing herders to drive their livestock into private land.

This was in reference to the conflict between herders and ranch owners in Laikipia County.

He also made an appearance in March 16 in Nyahururu when Deputy President William Ruto presided over a ceremony to disburse cheques to dairy farmers.

The Senator who appeared frail and struggled to stand up and was among politicians, who were heckled by youth chanting pro-Maina Njenga praises.

He had declined to be assisted to stand and addressed the meeting at his seat.

Addressing the crowd, the seemingly angry senator said: “You can hear them shouting me down only because they have been promised a plate of food, they would still get that plate of food if they choose to stay mum. They have been brought here to show that I have no supporters.”

Even those who supported him felt his advanced age would affect his re-election bid.

“We cannot deny that the senator commands respect from all quarters, but his advanced aged could be a disadvantage to him. He recently attended a political meeting at our village and he could hardly walk and stand for long,” said Mr Lukas Wanjau, a resident of Ngobit ward told the Nation last year.

“I think it is a high time that the senator hands over the mantle to someone else,” he said.

Senator GG Kariuki was first elected to Parliament to represent Laikipia West constituency in May 1963 and served uninterrupted for 20 years before losing in the 1983 elections.

Mr Kariuki was elected again as Laikipia West MP in 2002 and served to 2007. He was defeated but would later be elected as Laikipia County senator in 2013.

According to Githiga Ward MCA, Mr Peter Thomi, who is related to the veteran politician, Mr Kariuki has been ailing for the last one week.

“He has been admitted to hospital since last week until Thursday night when he was pronounced dead. He has left a legacy that will surely live among us,” he said.

He added that family members will hold meetings at his home in Nairobi and Rumuruti, Laikipia County for burial preparations.

Leaders and residents of Laikipia County mourned the death of their senator on Friday calling him their mentor.

Led by Governor Joshua Irungu described the late senator as a guiding light to politics and a leaders who served the country diligently.

Mr Nderitu Muriithi, who preceded the Senator as the Laikipia West MP, also mourned the senator as a national hero and one of the pioneer leaders who set the foundation of independent Kenya.

“Today is a sad day for our country, especially Laikipia County, following the demise of Senator GG Kariuki. He has been our father in politics and a mentor,” he said.