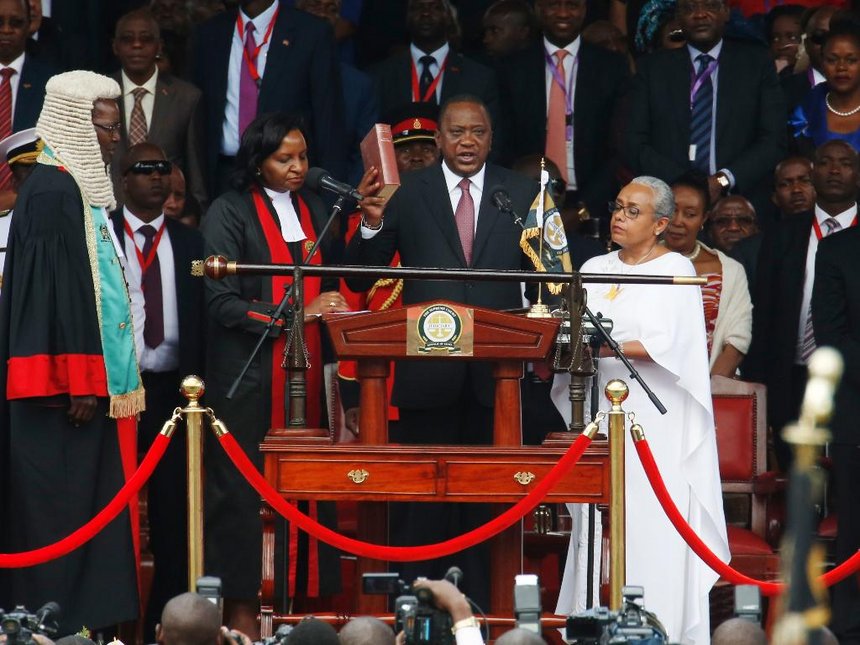 President Uhuru Kenyatta accompanied by his wife Margaret Kenyatta takes oath of office for his second term as chief justice David Maraga and registrar of the judiciary Ann Amadi look on at the Kasarani stadium, November 28,2017. /Monicah Mwangi

The swearing-in ceremony of President Uhuru Kenyatta in November last year cost taxpayers Sh352.1 million, a report has said.
The analysis by the Assumption of the Office of the President Committee was tabled in Parliament yesterday. Some Sh146.3 million went to security, protocol and logistics, while entertainment, media and communication gobbled Sh15 million and Sh45.9 million respectively.
Some Sh46 million was spent on the luncheon at State House. The report prepared by the budget subcommittee chaired by Treasury PS Kamau Thugge indicates Sh98.9 million was spent by the ministry of Foreign Affairs. Previously, the committee chaired by Head of Public Service Joseph Kinyua said Uhuru’s inauguration at Safaricom Kasarani Stadium would cost Sh300 million.

Read: Cash crunch hits Uhuru’s Sh300 million inauguration plan
Meanwhile, the subcommittee on Legal Affairs recommended to Parliament to amend Section 134 of the Assumption of Office Act which limits the powers of the President in an ongoing petition challenging his victory. “Introduction of a new section into the Act sating that whenever a declaration of a President-elect is nullified by the Supreme Court, Article 134 limitations on the Powers of the President during temporary incumbency are also lifted up to until the casting of the first vote in the subsequent fresh presidential election,” the committee recommends.
According to Article 142 of the Constitution, the President holds office from the time he is sworn in until another one is sworn in after an election. However, under Article 134 of the Constitution, the President is not allowed to carry out some of the mandates of a sitting President during the election period.
Under this part of the Constitution, the President assumes temporary incumbency from the date of the first vote in a presidential election until when the newly elected President assumes office. Uhuru cannot nominate or appoint judges or any other public officer, who the law requires him to, during this period.
He cannot also nominate, appoint or dismiss Cabinet Secretaries and other State or Public officers. The Constitution also bars him from nominating, appointing or dismissing a high commissioner, ambassador, or diplomatic or consular representative.
The President also cannot exercise the power of mercy and does not have the authority to confer honours in the name of the people and the Republic.