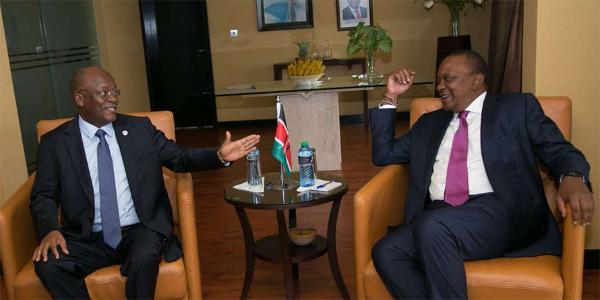 President Uhuru Kenyatta and his Tanzania counterpart John Magufuli have ordered an urgent meeting of their ministers to resolve long running trade disputes between the two States.

Traders from both countries have raised issues with growing administrative barriers that have cropped up to slow trade between the States that have been trying to integrate their economies in the last 18 years.

“We have small issues relating to businesses and traders between Kenya and Tanzania. We want Kenya and Tanzania ministers to meet urgently and resolve these issues,” said Dr Magufuli at the sidelines of a summit of the East African Community (EAC) in Kampala, Uganda.

He termed the disputes “small matters”, saying they should be resolved quickly.

EAC Secretary Peter Munya and Foreign Affairs Secretary Monica Juma have been asked to agree on a day when they will meet their Tanzanian counterparts to resolve the disputes.

Kenyan milk products were greatly affected by the trade wars that saw the value of export to Tanzania drop by 79 per cent between 2014 and 2016.

In July last year, Kenyan millers strongly opposed the government’s move to allow Tanzanian firms to bring in wheat flour duty-free, fearing they will be priced out of the market.