Kenya Counties where it is easiest to do business 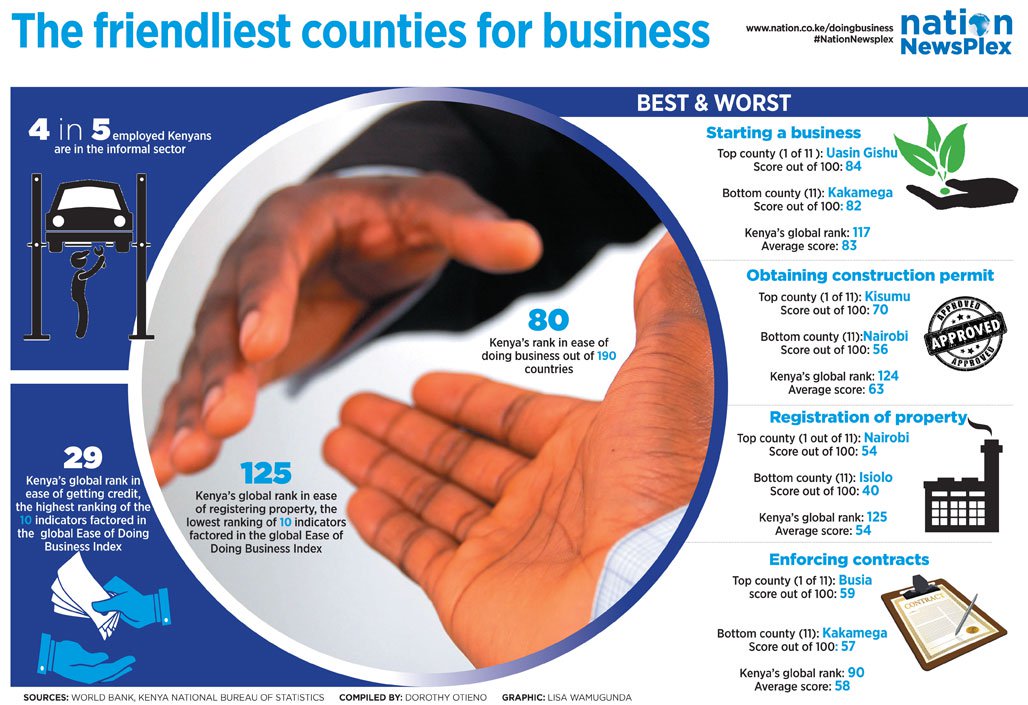 Kenya Counties where it is easiest to do business

It is easier to start a business in Uasin Gishu (Eldoret), register a property in Nairobi, obtain a construction permit in Kisumu, and enforce a contract in Busia (Malaba), reveals a World Bank survey on doing business in Kenya.

The survey that measures 11 counties considered four areas relevant to the life of a small to medium-sized company, including starting a business, dealing with construction permits, registering property and enforcing contracts.

No county does equally well in all four areas in the third report of the Doing Business series in Kenya. Except for Narok and Kakamega, all counties rank in the top half and bottom half on at least one indicator.

The mixed bag of results where a county’s regulatory environment may be more business-friendly in some areas than others present opportunities for reform in the different counties.

When combined the score for the four indicators the gap between the top and bottom county was small. Busia topped with 65 points. It was followed by Kisumu, Nyeri, Mombasa and Uasin Gishu, which tied in second place with 64 points, while Machakos and Narok each scored one percentage point less.

Kiambu, Nairobi and Isiolo also tied with 63 points while Kakamega languished at the bottom with one point less.

The World Bank selected these indicators because they relate to regulatory areas where counties have the administrative power to reform the regulation or make changes in the way it is implemented.

The mixed bag of results where a county’s regulatory environment may be more business-friendly in some areas than others present opportunities for reform in the different counties. The situation could motivate reform-minded governors and policymakers in counties to look for areas where local improvements are possible and learn from the best practices in other counties, even without legislative changes at the national level.
For instance, on average, starting a company requires seven procedures, takes 25 days and costs 26.3 per cent of Kenya’s income per capita. But at the county level, the time varies from 20 days in Uasin Gishu (Eldoret) and Mombasa to 27 days in Narok and Nyeri. Start-up costs range from 18 per cent of income per capita in Nyeri to 27 per cent in Mombasa.

The process to obtain a business permit takes two days in Kiambu (Thika) and Uasin Gishu (Eldoret) and as a result, these are the two counties where it is easiest to start a business, according to the assessment done in 2016.
Studies show that formal firms are more productive and therefore business start-up and other investment climate reforms foster productivity and employment growth throughout Kenya.

The survey found that the ease of starting a business is associated with greater willingness among informal firms to register. The informal sector constitute 83 per cent of employment, according to the 2017 Economic Survey.

Insights gleaned from the survey, which was done in 2016, suggest that local improvements not only advance the standing of one county compared with another, but also make a difference in the bigger, global picture. For example, Kisumu, with a distance to frontier (DTF) score of about 70 on acquiring construction permits, is close to those countries ranked in the top 40 per cent in the survey while Nairobi, with a score of 56, is among the bottom 20 per cent. A DTF score shows how far on average a county is from the best performance achieved by any economy on each indicator. The higher the score the better. Each measure is normalised between 0 and 100, with 100 representing the frontier of best practices, according to the World Bank.

If Nairobi were to embrace the good practices found in Kisumu for dealing with construction permits, it would not only move up the county ranks but Kenya would also advance on the global scale.

This is because Nairobi represents Kenya in the World Bank’s yearly Doing Business assessment, comparing 190 economies around the world. According to the 2018 Ease of Doing Business Index, Kenya, which ranks 80 out of 190 countries globally and fourth in Africa, improved 12 places. The year previous it climbed 21 places to rank 92.

Kenya National Bureau of Statistics figures show that Nairobi has the highest spending power. The city’s average monthly consumption per person is more than double the national average. The World Bank estimates that the city’s share of Kenya’s GDP is about 13 per cent.

It takes between 72 and 98 days to obtain construction permits in Busia (Malaba), Isiolo, Nyeri, Narok and Kisumu to twice as long in Kiambu (Thika) and Nairobi.

Registering property takes from 41 days in Mombasa to 73 days in Isiolo. Cost varies from six per cent of the property value in Kiambu (Thika) to almost double in Isiolo.

The best performance was in starting a business, where there was an improvement in 10 counties from 2012-2016.

Several changes are behind the improvements in both county and national rankings, according to the report. Since 2012, Kenya’s devolution of powers to 47 new counties has prompted major regulatory changes. At the national level, in the area of starting a business, the 2015 Companies Act eliminated the requirement to have registration documents notarised before the Commissioner of Oaths, which reduced procedural complexity and the time to start a business overall. In 2016 the stamp duty on the memorandum and articles of association and the statement of nominal capital was abolished and national registration costs were capped at Sh10,000.

In the area of registering a property, the then Ministry of Lands, Housing and Urban Development made its service charter available online in 2016, increasing transparency and giving clients access to critical information about the transactions they undertake at the Lands offices.

Even small administrative improvements that do not require major regulatory changes can make a big difference in the life of a small or medium-size firm. Take the case of Kisumu, whose government’s electronic platform for construction permits was launched in 2015. With this improvement, Kisumu moved up from the middle of the ranking in 2012 to become the easiest place to deal with construction permits in 2016.

This electronic platform streamlines the permitting process and reduces the time it takes to obtain an approval—from 30 to 22 days. In addition, the National Environment Management Agency’s branch in Kisumu is now more efficient at screening construction projects for potential harmful environmental impact than it is in other counties.
At the local level, arguably the boldest initiative is the creation of the Huduma Centres, which are one-stop shops for multiple government services.

Kenya Counties where it is easiest to do business Reviewed by samrack on February 24, 2018 .

Kenya Counties where it is easiest to do business Even minor administrative improvements can make a big difference in the life of a small comp It is easier to start a business in Uasin Gishu (Eldoret), register a property in Nairobi, obtain a construction permit in Kisumu, and enforce a contract in Busia (Malaba), reveals