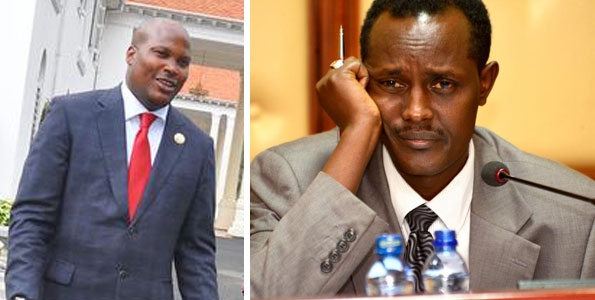 President Uhuru Kenyatta’s aide Jomo Gecaga has been linked to the preparation of the controversial list linking 175 top government officials to corruption as EACC commissioner Irene Keino claims that her life is in danger.

Ethics and Anti-Corruption Commission (EACC) chief executive Halakhe Waqo told the Senate that Mr Gecaga invited him to State House to provide a brief on the status of investigations into the corruption cases ahead of Mr Kenyatta’s address to Parliament.

“I was invited to give a brief on the status of corruption investigations. I tabled a report that the commission submitted on February 19 to the National Assembly Justice and Legal Affairs committee. I think it is on this basis that the President got interested.

“He then asked me to give a detailed brief which I presented to him at State House,” he said.

Mr Waqo said he was not aware that the President would annex the confidential brief to his report on implementation of National Values which was presented to Parliament two weeks ago.

“To me, the report was confidential and meant for the President’s consumption. I did not foresee the possibility of it being made public,” he told the Senate Standing Committee on Legal Affairs. EACC’s independence is protected in the Constitution and it should not be controlled or directed by any arm of government.

Senior public officers, including cabinet secretaries, principal secretaries, governors and MPs are accused of looting public coffers, conspiring with private firms to inflate prices of public goods, illegal transfer of land and rigging of government tenders in favour of associates.

Mr Waqo, commission chairman Mumo Matemu, and vice-chairperson Irene Keino separately testified before the committee on the confidential list, the abrupt resignation of Prof Jane Onsongo and the workings at the commission.

The commissioners said they were under pressure both within and outside the commission following their investigations into mega scandals. Ms Keino said she was summoned alongside Prof Onsongo to the Office of the President where two State officers threatened them and asked them to resign.

She refused to name the two State officers. “I chose to provide a confidential letter which I think will help me minimise the threats,” she said.

The commissioners blamed Mr Waqo for the squabbles at EACC, saying he had refused to implement resolutions of the commission.

The CEO conceded that he prepared the report without the knowledge of the commissioners. Mr Matemu and Ms Keino said the commission did not know the content of the confidential brief until Monday, four days after the President had tabled it in Parliament.