This is the beginning, terrorist tells victims

Home  › Kenya › War on Terror › This is the beginning, terrorist tells victims 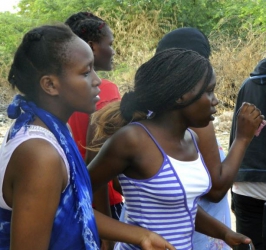 This is the beginning, terrorist tells victims

According to multiple sources who were interviewed while camping at the displaced camp in Garissa military camp, the militia men who were frequently communicating in Kiswahili allegedly said they were planning to carry out numerous similar attacks against learning institutions in several parts of the country. Maureen Manyego, 21, who survived mysteriously from the deadly terror attack at her campus, said that after taking refuge in a wardrobe in the one of ladies hostels, she overheard the terrorists lecturing to their victims over why they had to kill them. “Tumekuja hapa kuwaua nyinyi na pia sisi tukufe, hatuogopi kukufa (We are here to kill and die with you). We are not afraid of death. You are dying to pay for the arrogance of your political leader (President Uhuru) who has refused to pull out their military officers from Somalia. As long as Kenyas military is in Somalia, it will be paid with its citizens blood,” one of the youngest gun men said. Mayengo who hails from Kakamega County said of the struggles that led to the butchering of four of her hostel mates.

Manyego, a 2nd year education student at the campus said she hide herself at the wardrobe for about thirty minutes as the militia rampaged in the hostels killing students at sight. She added that some Muslim ladies who attempted to dissuade the killers from harming fellow students were sternly warned before they were ordered to go to the college’s mosque where they would remain safe from any harm. She said one of the gun men ordered the Muslim ladies to vacate the hostels where their colleagues were been butchered, if they cared for their live. The terrorists said theirs was a bigger mission to teach the Kenyan leadership a hard lesson that will compel them to withdraw their forces from Somalia sooner or later. “We have warned your authorities many times over our plans to attack. We have issued alerts warning over the same, but you are today paying for your government’s refusal to heed to our threats and calls to remove your soldiers in our country,” Manyengo heard one of the terrorist saying. See Also: Parents of Garissa University students say their children had told them the region was insecure She said, the terrorist taunted them, that they came to colour their upcoming Easter holidays “We are not bad guys, we are just here to make your Easter Holiday better”, The visibly terrified Manyanga said that she was later rescued by the military officers who stormed her hostel to rescue the students who were still held up. Auma Geoffrey, 22, who took refuge on top of a wardrobe, said the assailants were forcing their victims to call their parents or relatives and notify them that they were getting killed for the defiance of their leadership who had ignored their call to get out of Somalia. “I witnessed the attackers forcing their victims to make calls to their parents and tell them to ask their president and deputy to pull out their soldiers out of territories in the war-torn neighbouring country”, he added.

This is the beginning, terrorist tells victims Reviewed by samrack on April 3, 2015 .

This is the beginning, terrorist tells victims According to multiple sources who were interviewed while camping at the displaced camp in Garissa military camp, the militia men who were frequently communicating in Kiswahili allegedly said they were planning to carry out numerous similar attacks against learning institutions in several parts of the country. Maureen Manyego,