Uhuru: I’ve got no issue with Abagusii community 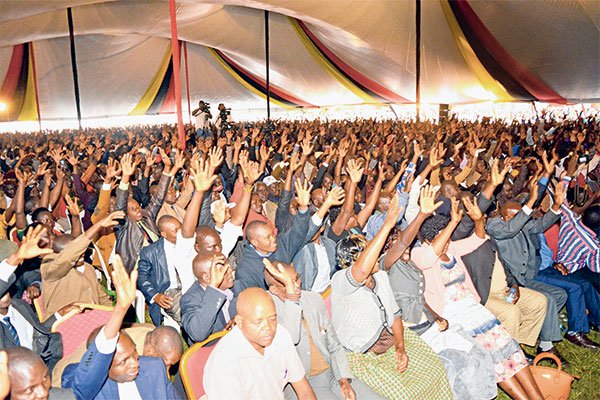 Some of the members who attended the Kisii and Nyamira delegates meeting at State Lodge Grounds ,Nakuru County on September, 13, 2017. PHOTO | AYUB MUIYURO | NATION MEDIA GROUP

Uhuru: I’ve got no issue with Abagusii community

President Uhuru Kenyatta opened up about why he was bitter with the Supreme Court and Chief Justice David Maraga as he and his Deputy William Ruto hosted members of the Abagusii community at State House Nakuru Wednesday.

The President said that being human, he had the right to get angry and bitter that his clear victory had been taken away from him by Justice Maraga and his court.

He told the more than 15,000 delegates from Kisii and Nyamira counties that he had no issues at all with the community, of which the CJ is a member, and that his only problem was the Chief Justice and the Supreme Court for nullifying his election because he believed he won fairly on August 8.

“They stole my victory in broad daylight. The Supreme Court should have ordered a repeat count of the votes in an open ground like Kasarani Stadium,” said Mr Kenyatta, adding that it would be hypocritical of him to hide his feelings and bitterness at the court’s verdict.

He added: “It is true some of us were really pained … we were hurt … just imagine someone snatching your victory from you just like that,” he said.

The President said the decision was a bitter pill for him to swallow, equating himself to someone whose cow had been stolen and after police recover it, deny him possession of the animal because he did not fill some form at the police station.

“I cannot lie to you that I was happy with the decision by the Supreme Court led by Maraga. I was very angry with Maraga and his court … that does not mean I have a problem with the Kisii community. It would have been better if they called for recount.”

The President criticised Nasa leader Raila Odinga whom he accused of rushing to Nyamira and Kisii to turn his (Mr Kenyatta’s) anger on the Supreme Court into a tribal issue — as an attack against the community.

“When he attacked (Cabinet Secretary) Fred Matiang’i, did he not know that he was also a Kisii?’’

The Deputy President reiterated the president’s message that they had nothing against the community.

“We are the ones who put Maraga in office, didn’t we know he was Kisii?” Mr Ruto asked.

He too accused Mr Odinga of spreading propaganda that they were fighting the Abagusii.

“Raila should stop hate politics and setting communities against each other,” said the DP and added: “Let us be gentlemen and sell policies so that we are able to change Kenya.

The delegation pledged to marshal Abagusii votes for the president.

Several elected MPs from the two counties who did not support the President on August 8 pledged to support him this time round. They include PDP’s Oroo Oyioka (Bomachari), Ezekiel Machogu (National Agenda Party, Nyaribari Masaba) and Prof Zadock Ogutu (Independent, Bomachoge Borabu).

The President garnered 52 per cent of the votes in Nyamira and 48 per cent in Kisii in the August elections.

Uhuru: I’ve got no issue with Abagusii community Reviewed by samrack on September 13, 2017 .

Some of the members who attended the Kisii and Nyamira delegates meeting at State Lodge Grounds ,Nakuru County on September, 13, 2017. PHOTO | AYUB MUIYURO | NATION MEDIA GROUP  Uhuru: I’ve got no issue with Abagusii community President Uhuru Kenyatta opened up about why he was bitter with the Supreme Court and Chief Justice