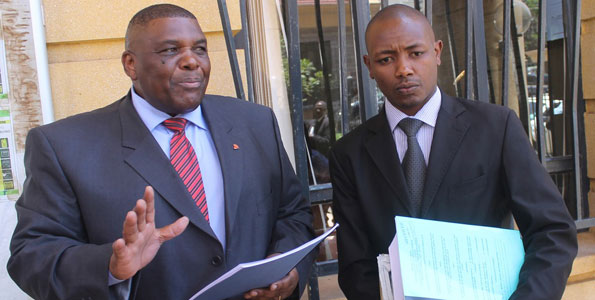 Ugandan activist David Matsanga has filed a High Court petition seeking to compel the government to make public a report on the post-election violence prepared by a commission led by retired Court of Appeal judge Philip Waki.

The political activist wants the government compelled to hand over a copy of the report to President Uhuru Kenyatta and publish the full report, which he says is crucial to an application he has filed at the International Criminal Court (ICC) seeking to disqualify the document from being adduced as evidence.

He says he filed the application at the ICC on February 13 to challenge a decision to admit the Waki Report as evidence in a case against Deputy President William Ruto and former radio presenter Joshua Sang. The ICC application will be heard on March 23.

He has sued Justice Waki, the office of the prosecutor of the ICC, and Attorney-General Githu Muigai.

“Pending the hearing and determination of this suit, the respondents be ordered to publish the full report prepared by the commission of inquiry into the post-election violence, including the secret envelope containing the names of persons suspected to have borne the most responsibility,” said Dr Matsanga.

ICC judges last month admitted the report as evidence in the case against Mr Ruto and Mr Sang, but said the excerpts the prosecution intends to use did not refer to the alleged acts of the two accused persons.

Mr Ruto has been accused of being one of the masterminds of the violence that claimed more than 1,000 lives and left over 600,000 people displaced. Mr Sang has been charged with inciting violence through a radio show.

The suit comes as Jubilee MPs plot to summon members of the Waki commission in a bid to scrutinise the report afresh.

Nandi Senator Stephen Sang said last month that the National Assembly and the Senate would review the report again over claims that it is “bogus, biased and a total sham”.

Charges against four of the six ICC suspects drawn from the Waki list have since been dropped for lack of evidence. They are former police boss Hussein Ali, former Cabinet mister Henry Kosgey, former head of civil service Francis Muthaura and President Kenyatta.

Justice Isaac Lenaola on Tuesday directed Dr Matsanga to serve the respondents with the suit papers, and ordered that all the parties in the suit appear before him on March 19.

Mr Matsanga reckons that the report is crucial to his ICC application, and that the document is being unlawfully held by the government and the ICC as it is a public document.

He says in his petition that the secret list handed over to the Kofi Annan-led panel of eminent persons in 2008 had 20 names of people believed to be behind the violence.

David Matsanga (left) with his lawyer Waithaka Ngaruiya at Milimani Courts on March 10, 2015, after filling a petition seeking release of Waki report on post-election violence. PHOTO | PAUL WAWERU By BRIAN WASUNA, bwasuna@ke.nationmedia.com IN SUMMARY Ugandan activist David Matsanga wants the government compelled to publish the Waki poll report, which he says is crucial