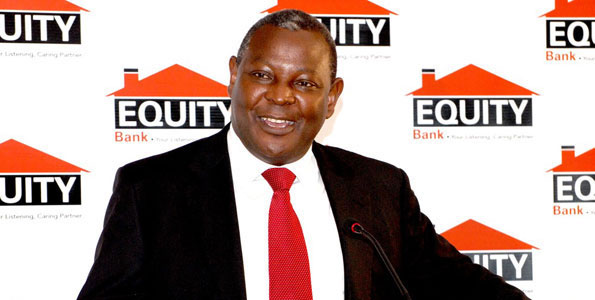 Equity Group rode on increased lending and higher transaction income to post the largest profit ever in the history of Kenya’s banking.

The record profit also enabled Equity to topple rival KCB from its long-held position as Kenya’s most profitable bank.

The Sh17.1 billion profit for the year ended December 2014 was 27.7 per cent higher than the Sh13.4 billion the bank made a year earlier. KCB returned a Sh16.8 billion net profit for the same period, a 17.4 per cent increase from the previous year’s Sh14.3 billion.

While Equity’s performance was driven by the mainstay lending business, it is the divestiture from Housing Finance that provided the big leap it needed to beat KCB in terms of nominal profits.

Equity last year sold its 24.7 per cent stake in the mortgage financier to insurance group Britam for Sh2.8 billion, a transaction from which it made a Sh1 billion gain that boosted its overall profit.

Excluding this gain, KCB would have remained at the top of the nominal profits table as it had done since 2011 when its Sh10.9 billion net profit saw it replace Barclays Kenya as the most profitable lender.

The shift in profitability rankings reflects increased competition among Kenya’s large banks that have significantly expanded their balance sheets over the past decade.

KCB and Equity are arguably the fastest growing banks, blazing the trail in regional expansion that they are betting on to reduce their reliance on the Kenyan market.

Foreign-owned rivals Barclays and Standard Chartered do not have the option of going regional since their London-based parents already have subsidiaries in those markets.

Equity’s chief executive, James Mwangi, downplayed the perception that the bank’s exceptional performance in 2014 would not be replicated in future having been aided by the one-off transaction.

“The gain was offset by another non-recurring expense of Sh800 million,” he said, explaining that the bank spent the money in upgrading its ICT infrastructure and hiring more staff as it restructured its operations after forming a holding company.

Equity’s interest income rose 10.9 per cent to Sh35.3 billion buoyed by increased lending that saw the loan book grow by a quarter to Sh214 billion.

Other income, including fees charged on transactions, increased by a fifth to Sh18.4 billion. The bank declared a dividend of Sh1.8 per share, up from Sh1.5 paid for the previous period.

Mr Mwangi said Equity has no plans to raise additional capital in the near term, noting that its conservative dividend payout policy and strong cash generation would continue to offer sufficient headroom for further expansion.

A number of banks have either raised or are in the process of raising billions of shillings from a mix of rights issues and corporate bonds to meet the higher capital ratios that became effective in January.

While Equity has overtaken KCB on the profit front, the latter is seen as having an edge in terms of a larger asset base that can generate greater earnings if deployed efficiently.

For investors, however, absolute profitability is not the only gauge of how attractive a stock is. Operational efficiency and smarter deployment of capital are some of the variables that determine how the profit numbers are interpreted.

Equity runs a more efficient operation based on the cost-to-income ratio standing at 52 per cent, compared to KCB’s 58.9 per cent. This means KCB is spending more to generate earnings compared to Equity.