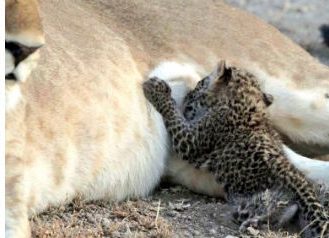 This week, the first-ever photos of a wild lioness nursing a leopard cub were captured in Tanzania’s Ngorongoro Conservation Area by Ndutu Lodge guest, Joop Van Der Linde. Learn how this unlikely pair found one another, why this case of cross-species nursing is so unusual

A baby leopard can’t change his spots, but this lioness doesn’t seem to mind.

These beautiful pictures are the first ever taken of a wild lioness nursing a cub from a different species – an extremely rare event.

The pair were spotted by Joop Van Der Linde, a guest at Ndutu Safari Lodge in Tanzania’s Ngorongoro Conservation Area.

The scene is the Serengeti; the attentive mother, five-year-old Nosikitok.

The lioness has a GPS collar fitted by Kope Lion, a conservation NGO, and three young cubs of her own – born around the 27-28 June.READ MORE