Kenya specialists in US to brief Trump team on election risks 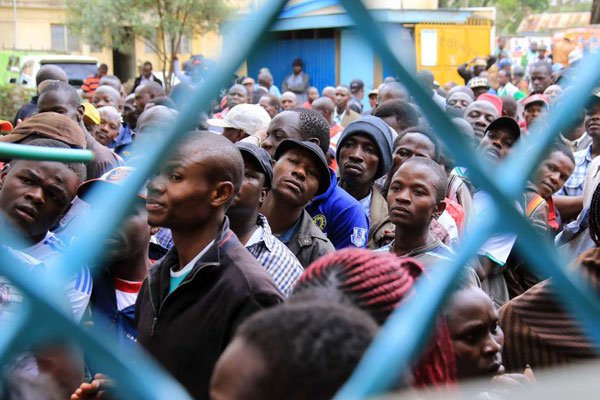 Kenya specialists in US to brief Trump team on election risks

A group of about 25 US activists and analysts well versed in Kenyan politics is seeking to inform the Trump administration of the importance — and potential dangers — of the August 8 elections.

The members of this Kenya Working Group, as it is known, have been meeting regularly in Washington in recent weeks to exchange information and to craft strategy for influencing US actions in the run-up to the voting.

The group has been invited to brief State Department officials on the risks associated with the election and to discuss possible US responses if violence breaks out. But it is not clear whether the group’s assessments and recommendations are reaching the small set of policymakers who have the ear of President Trump.

Co-chairs Sarah Margon of Human Rights Watch and former US ambassador to Kenya Mark Bellamy each express concerns about the group’s ability to help shape US policy on Kenya, given the continued lag in filling Africa-related posts in the White House and State Department.

Ms Margon said members of the group have been in touch with Trump administration officials but have not gotten much response to suggestions for how the US can help ensure a credible and peaceful voting process.

In contrast to the Trump team’s apparent inattention, US Ambassador to Kenya Robert Godec “has been very strong” in coordinating moves by diplomats in Nairobi aimed at bolstering Kenyan democracy, Ms Margon added.

Mr Bellamy noted that the group is seeking to meet with former US Secretary of State John Kerry, co-leader of an election-monitoring team sponsored by the Carter Centre. Aminata Touré, a former prime minister of Senegal, will join Mr Kerry in heading the Carter Centre mission that is to include about 70 observers at polling stations around the country.

In talks with Mr Kerry, the Kenya Working Group would underscore “the risks of the election being problematic,” Mr Bellamy said. Members of the group also hope to discuss “the role the US may be called upon to play” if the outcome of the voting triggers dangerous disputes, Mr Bellamy added.

The Trump administration should now be pressing the Kenyan government to “enhance the credibility of the IEBC,” the former envoy emphasised. “It’s vital that the commission be seen as impartial and effective,” he said.

The government should also “be issuing very clear instructions to the police, telling them that their role is not to crush the first sign of protests but to ensure the integrity of the election,” Mr Bellamy said.

He recently took part in a round of meetings in Kenya with government officials, civil-society activists and members of the opposition. The group in turn provides a forum in Washington for politicians and activists visiting from Kenya, Mr Bellamy noted. It is also in regular touch with the Kenya embassy in Washington.

The Working Group is not aligned with any political faction in Kenya or the United States, and it receives no funding for its work. But the group makes up in expertise what it lacks in resources.

Most of its 25 members are affiliated with NGOs that have offices or personnel on the ground in Kenya, Mr Bellamy said.

Prof Joel Barkan, a US political scientist focused on Kenya, was instrumental in launching the group in 2012. He died in 2014 at age 72.

The working group had been meeting only sporadically during the past 18 months but has become more consistently active as the election approaches, Mr Bellamy said.

Kenya specialists in US to brief Trump team on election risks Reviewed by samrack on July 15, 2017 .

Share thisFacebookTwitterPinterestEmailWhatsAppKenya specialists in US to brief Trump team on election risks A group of about 25 US activists and analysts well versed in Kenyan politics is seeking to inform the Trump administration of the importance — and potential dangers — of the August 8 elections. The members of this Kenya Working Group, as it