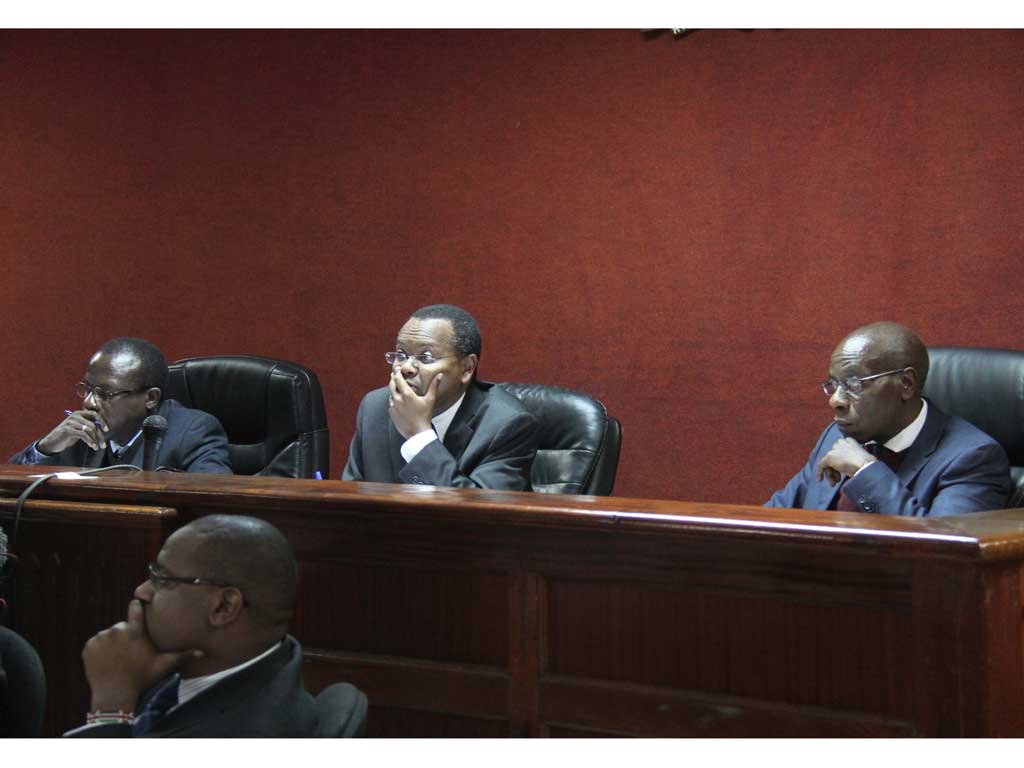 Should Justice Odunga have disqualified himself?

“….With respect to the rulings last week, we want to be able to assert that part of the bench, and specifically one Justice Odunga, is related to James Orengo through marriage. He’s married to Sara Odunga who is the daughter of the late Archbishop Ondiek, and therefore is a relative of Orengo. Sara Odunga is the niece of James Orengo. Question we are asking is, did he declare this to the advocates which were involved in this case so that that conflict of interest could be addressed… ”

Jubilee Secretary General Raphael Tuju made his remarks about Justice George Odunga on July 10, 2017, one day after a Facebook post by Ugandan maverick David Matsanga made the same accusations, and copied it to the Facebook accounts of Dennis Itumbi and Manoah Esipisu, who are State House officials.

Archbishop Ondiek refers to Stephen Ondiek, the Legio Maria archbishop who was MP for Ugenya until his death, when Mr James Orengo took over.

A 2002 report of the Daily Nation covering the death of Archbishop Ondiek’s son notes that one of the late bishop’s deceased wives was a sister to James Orengo, although the story does not name her. The story says Archbishop Ondieki had eight wives.

Mr Matsanga’s account contradicts the Nation account by naming Concilia Ondieki as Mr Orengo’s sister. Concilia herself is quoted in The Star of October 23, 2012 describing Orengo as her brother-in-law, not her brother, and opposing his bid for Senator of Siaya, while supporting Oburu Oginga instead. Mr Orengo went on to win the election.

According to Mr Nzamba Kitonga, a lawyer, and former chair of the Committee of Experts on Constitutional review, a family relationship would be enough to disqualify one’s self from a case.  “Close family, the word to use is close. It does not even have to be family, it can even be a friend,” he told Newsplex.

According to the Judicial Code of Conduct and Ethics, which was gazetted on July 29, 2016, conflict of interest exists when a judicial staff member’s objective ability or independence of judgment in performing official duties is impaired or may reasonably appear to be impaired.

The code limits family to parents, children, siblings, stepsiblings, stepchildren, stepparents, in-laws, grandparents, and people living in the same household as the judge. Nieces, nephews, aunts and uncles are not included.

Judges and Magistrates are State Officers according to Article 260 of the Constitution.  Article 73 (2) (b) states that the guiding principles of leadership and integrity include objectivity and impartiality in decision making and in making sure decisions are not influenced by nepotism, favouritism, any improper motives or corrupt practices.

Although there appears to be relationship between Mr Orengo and Judge Odunga, there is little evidence of its closeness. Furthermore, stronger evidence than Mr Matsanga’s account which is contradicted by historical accounts would be necessary.

Justice Odunga did not have to disqualify himself from the ballot paper case Reviewed by samrack on July 15, 2017 .

Share thisFacebookTwitterPinterestEmailWhatsAppJustice Odunga did not have to disqualify himself from the ballot paper case Judges and Magistrates are State Officers according to Article 260 of the Constitution Should Justice Odunga have disqualified himself? “….With respect to the rulings last week, we want to be able to assert that part of the bench, and specifically one