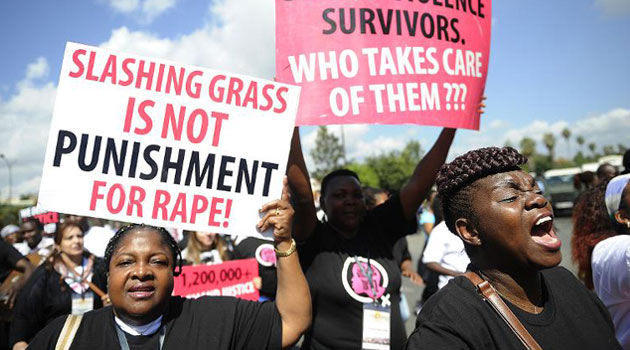 Three men accused of beating and gang raping Liz, a 16-year old girl from Busia, in 2013 have been sentenced to 15 and seven years imprisonment respectively.

Liz was gang-raped by six men in June, 2013 while walking home alone from her grandfather’s funeral in Busia. The men beat and raped Liz for several hours after-which they threw her into a pit latrine and fled. Aside from the beatings and sexual assault, Liz also sustained spinal injuries and obstetric fistula from the attack.

Her case caused national and international uproar after three men who were identified by Liz as perpetrators were ordered by police to cut grass around the police station before they were released. A petition calling for justice garnered over 1.8 million signatures world wide.

The campaign dubbed Justice for Liz resulted in a review of the case which resulted in today’s ruling.

Kimberly Brown Legal Consultant, for Equality Now which is one of the organisations that has being following up Liz’s case said Monday’s sentencing will have a ripple effect across the nation and hopefully the region at large.

“ Negative cultural attitudes towards women, as well as the fear and stigma associated with such crimes, make reporting of cases a daunting and often impossible task. An estimated 19 out of 20 rapes in Kenya are not reported and are therefore unpunished. Equally troubling, the national number of defilement cases in Kenyan courts nearly doubled last year,” Brown said after the ruling.

“The fact that Liz’s case took so long to reach this point – and still faced serious obstacles despite strong national and global support – illustrates the injustices that are still suffered by survivors in a criminal justice system in transition. While Kenya boasts one of the most progressive legal and policy frameworks for addressing sexual violence, Liz’s case and countless others have revealed significant failures of local authorities to adequately address sexual violence,” she added

She said knowledge gained from the case can be used to clarify the role of special prosecutors and intermediaries, and to better protect survivors of sexual violence during the entire legal process.

“There is also an opportunity now to learn from best practice and to push for further implementation of the law and the bolstering of systems which protect the rights of Kenyan girls and women,” she said.

Thugs Who Were Ordered To Slash Grass After Gang Raping A Girl, Now Jailed 15 Years Following Outcry Reviewed by samrack on April 13, 2015 .

Three men accused of beating and gang raping Liz, a 16-year old girl from Busia, in 2013 have been sentenced to 15 and seven years imprisonment respectively. Liz was gang-raped by six men in June, 2013 while walking home alone from her grandfather’s funeral in Busia. The men beat and raped Liz for several hours