The Congo’s Solar-Powered Robot As Traffic-Controller 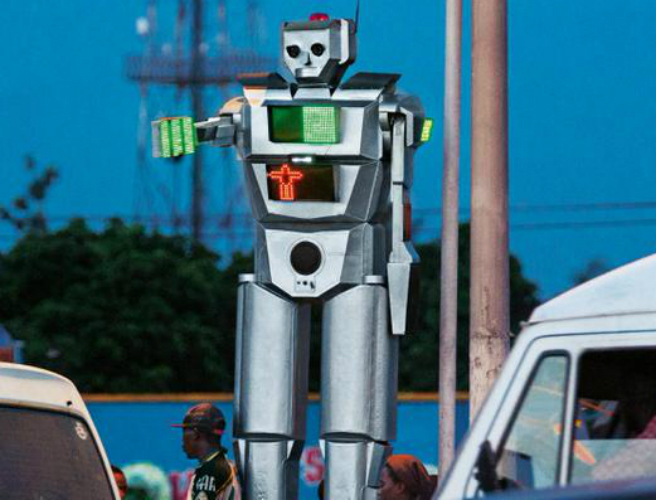 The robots are made by Therese Izay’s company Women’s Tech, which designs and manufactures the robots. Izay hopes the idea will catch on in other cities across Africa and beyond:Pic:(Twitter.com/YassineElkadhi/) Photo Courtesy

The robots are equipped with improved electronic components which make them better than the first generation of robots that cost about 15,000 dollars to manufacture, while the last three cost each 27, 500 dollars. Every robot weighs 250 kg and is 2.5 meters high.

The intersection of Boulevard Triomphal and Huileries Avenue in Kinshasa, Congo, has two new additions – robot traffic policemen. These large robocops have replaced human police officers and traffic lights, and, believe it or not, they’re actually doing a great job.

At first glance, the robocops don’t look like much. They appear to be rudimentary tin boxes with attached tin hands. I’d say they have a scarecrow-like effect. But commuters have responded surprisingly well to the latest technology.

Demouto Motumbo, a resident of Kinshasa, said: “As a motorcyclist I’m very happy with the robot’s work. Because when traffic police control the cars here there’s still a lot of traffic. But since the robot arrived, we see truly that the commuters are respectful.”

Stunning invention made in DR Congo by women’s technology:
Talking robots take control of Kinshasa’s traffic — and tomorrow of your crossroads?

Kinshasa is not known for safe or orderly traffic, and this is perhaps the reason the DRC capital has introduced a number of giant robotic traffic police to manage key junctions in the city.

It’s hoped the huge, solar-powered giants will reduce road deaths, which total over 2,200 since 2007.

Constructed from aluminium, the robots have green and red signal lights on each hand to guide traffic, while cameras in the chest stream live video footage to police stations.

Two robots have been on duty since 2013, and another three were recently designed by an association of women’s engineers.

Motorists have responded positively, according to Agence-France Presse. “There are certain drivers who don’t respect the traffic police. But with the robot it will be different. We should respect the robot,” taxi driver Poro Zidane told the agency.

Police are also happy to have new technology on their side, but insist officers are still the key to solving Kinshasa’s traffic woes.

Therese Izay, president of Women’s Technology, which provided the latest robots, says they increase the chances of catching those committing violations:

“In our city, someone can commit an offence and run away, and say that no one saw him. But now, day or night, we’ll be able to see him in real time and he will pay his fine like in all the serious countries of the world.”

The Congo’s Solar-Powered Robot As Traffic-Controller Reviewed by samrack on March 18, 2017 .

Share thisFacebookTwitterPinterestEmailWhatsAppThe robots are made by Therese Izay’s company Women’s Tech, which designs and manufactures the robots. Izay hopes the idea will catch on in other cities across Africa and beyond:Pic:(Twitter.com/YassineElkadhi/) Photo Courtesy Enormous robots police traffic in Democratic Republic of Congo The robots are equipped with improved electronic components which make them better than