That’s Munyonyi! Uhuru Picks Out Old Friend From the Crowd 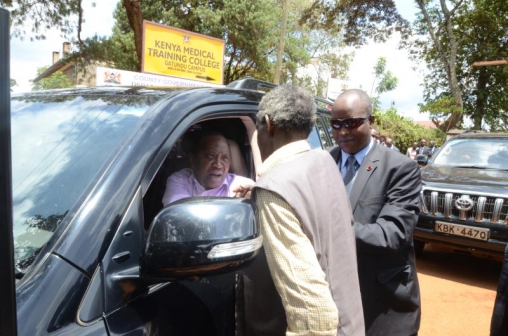 That’s Munyonyi! Uhuru Picks Out Old Friend From the Crowd

“Ururururu mwanaa tiga kurira” (oh baby stop crying) is the chorus of a popular Kikuyu song “Onga Munyonyi”. Most music lovers know the song by Dick Njoroge alias Munyonyi, which was a hit in the 1980s.

But unfortunately, many Kenyans can’t pick the man who sang the popular song out in a crowd. But President Uhuru Kenyatta can.

He did just that when he picked Munyonyi, 65, from the crowd by calling out his name during his tour of Kiambu County last week.

Mr Munyonyi’s encounter with the President outside Gatundu Level Four Hospital brought him instant fame in his village.

But what locals didn’t know is that this was the second time the President was seeking the musician’s attention and requesting him to visit him at State House.

During the president’s visit to Kayole, Nairobi, eight months ago, Munyonyi was busy recording a video with his son, who is also a musician when the President’s spotted Munyonyi busy strumming his guitar and dancing. He sent his bodyguards to ask for his mobilephone number.

“Due to old age, I did not remember the number off-head and that is how I missed a visit to State House,” he said.

But what is it about the President and Munyonyi? Well, there is no doubt that Kenyatta, like many other Kenyans, likes the musician’s songs. But there is more than that.

The two are old friends. Munyonyi said he first met the Uhuru when he (Munyonyi) performed alongside the legendary Gikuyu musician Joseph Kamaru during Uhuru’swedding ceremony many years ago.

But his relationship with the Kenyatta family goes back further. “I was close to Ngengi Muigai and that is how I met President Kenyatta. I was in Ngengi’s campaign team and when Uhuru joined politics, he also requested me to be in his campaign team,” he said.

Munyonyi’s wife Peninah Waithera, 45, said she was exhilarated by the news.

“I was in the house doing my ordinary house chores when some women broke thenews that the President had met my husband and that they had a long conversation. This has been the talk of the village,” she said.

Waithera said she would love to accompany her husband to see the President.

“I remember when I got my first two children, Uhuru’s family paid my medical bills at MP Shah Hospital and Agha Khan hospital,” she recalled.

Waithera, a mother of eight, said the President visited their home at Githuya village, Gatundu, before going into politics and they slaughtered him a goat.

Munyonyi is even more excited: “This is like a dream. I am yet to come to terms with the reality. It is a miracle that the President noticed me in the crowd and he now wants to see me at State House.”

He said the President wanted to know whether he could find his way to State House to visit him.

“I told him that his secretary is a friend of mine and that I will make arrangements to go and see him soon,” he added.

But it is unlikely that Munyonyi will sing his Onga Munyonyi hit song to the President when he finally traces his way to State House.

He lost his magical voice 20 years ago after he was diagnosed with tuberculosis at Kiambu Hospital.

“As time went by, my voice began to change. It became hoarse and finally I could not sing. I now perform with my son who sings as I play the guitar. We haverecorded an album and one song is dedicated to the President,” he revealed.

He has already established contact with State House and expects to make a visit to the house on the hill soon.

Munyonyi says his only request to the President is that he help him buy musical instruments. “The President bought me a music system five years ago but when it broke down, I took it to the local technician; who stole it,” he added.

During his tour of Gatundu last week, the President reconnected with many people from his backyard.

At one point he confronted his security officers when they tried to push away a woman who the President later embraced and had a conversation with.

At Mondoro village, Gatundu South, he promised two men that he would return soon to catch up with the goings-on in the area.

That’s Munyonyi! Uhuru Picks Out Old Friend From the Crowd Reviewed by samrack on April 18, 2016 .

That’s Munyonyi! Uhuru Picks Out Old Friend From the Crowd “Ururururu mwanaa tiga kurira” (oh baby stop crying) is the chorus of a popular Kikuyu song “Onga Munyonyi”. Most music lovers know the song by Dick Njoroge alias Munyonyi, which was a hit in the 1980s. But unfortunately, many Kenyans can’t pick the man who