Somalia, US to address peace and drought in new govt 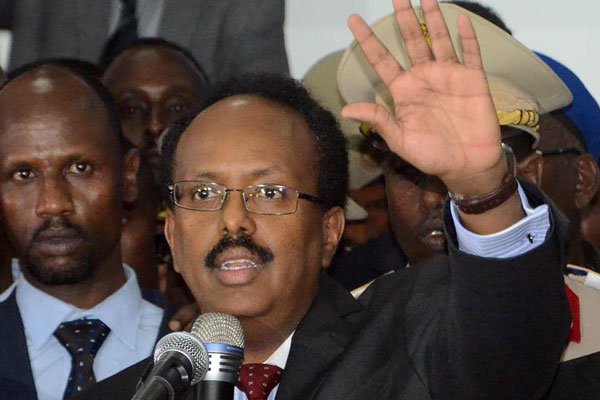 Somalia President Mohamed Abdullahi Farmajo speaks in Mogadishu on February 8, 2017 after he was declared winner. The US has said the new president should promote reconciliation and address the drought problem. PHOTO | AFP

Somalia, US to address peace and drought in new govt

A supportive State Department response on Wednesday to the election of a new president of Somalia gives no indication of a shift in US policy under President Donald Trump.

The positive tone of the statement issued by “Acting Spokesperson” Mark Toner was similar to many State Department comments on Somalia during the Obama administration.

The US looks forward, the statement said, to “working in partnership with the president and new government to advance reconciliation, drought relief, security, and build the strong institutions to deliver good governance and development for the Somali people”.

The Trump administration characterised Wednesday’s election as “an important step forward for the country”, noting that Somalis were able to vote in greater numbers than in 2012.

Mild criticism was offered in regard to the conduct of the voting on Wednesday.

Farmajo beat his closest challenger and incumbent Hassan Sheikh Mohamud in the second round of voting.

The State Department, now led by Trump appointee Rex Tillerson, expressed “regret [over] the numerous credible reports of irregularities in the electoral process”.

And the US urged President Farmajo to “take credible steps to stamp out corruption and to establish strong electoral institutions to enable a free and fair one person/one vote poll in 2020”.

SHABAAB WAR
This official US response contains no hint of a pullback by Washington in its financing of the war against Al-Shabaab.

The African Union’s military mission in Somalia (Amisom) and forces deployed by the Mogadishu-based government have received more than $1 billion (Sh100 billion) in US funding during the past 10 years.

Advisers to Trump did voice scepticism regarding strategy toward Somalia as part of a set of Africa-related policy questions they submitted to the State Department last month.

“We’ve been fighting Al-Shabaab for a decade; why haven’t we won?” the Trump team asked in the document sent prior to the new president’s inauguration on January 20.

Its leaked contents were reported by the New York Times on January 13.

President Trump has sharply departed from Obama administration policy on Somalia in one respect.

Soon after taking office, Trump ordered a 90-day ban on entry to the US by nationals of Somalia and six other Muslim-majority countries.

Somalia, US to address peace and drought in new govt Reviewed by samrack on February 9, 2017 .

Share thisFacebookTwitterPinterestEmailWhatsAppSomalia President Mohamed Abdullahi Farmajo speaks in Mogadishu on February 8, 2017 after he was declared winner. The US has said the new president should promote reconciliation and address the drought problem. PHOTO | AFP Somalia, US to address peace and drought in new govt A supportive State Department response on Wednesday to the