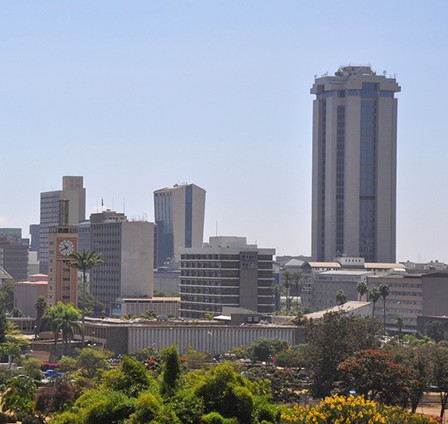 No contractor will be as powerful as James Isabirye Mugoya – and now, thanks to the National Archives – we have evidence that the once-powerful and well-connected Ugandan actually walked around with a Kenyan identity card.

Mr Mugoya was not a Kenyan and never renounced his Ugandan citizenship and how he acquired that ID no 6445203 in Makadara in 1979 is not clear. Although he states that he was born in 1946 in Bulubandi, Uganda, the ID indicates that he was from Mukomani (sic), Mombasa.

That adds some cryptic clue about the inner dealings of this man whose company, Mugoya Construction and Engineering, had virtual monopoly of government contracts and vice during the 24 years of Moi rule.

With the ID, Mugoya could bid for government contracts like a local cowboy and cut deals.

If one man milked dry Kenya’s parastatals of cash via lucrative tenders, Mr Mugoya stood ahead of the pack. He had been vilified in Parliament, become subject of bar talks and finally – estates were named after him. One in Nairobi and one in Mombasa! If you know Nairobi’s Mugoya Estate, or Mugoya Housing Scheme in Nyali, Mombasa, then you almost know him.

Mugoya was not elegant. He looked humble and bordered on primordial; an amalgam of contradictions; private, secretive but with indefatigable ambition. For that, he was the most controversial money guy in town. Though he was a foreigner, he was the most sought-after, most feared, and most derided contractor – all in equal measure.

He neither confirmed nor denied the whispering campaign that the company he was the managing director of did not belong to him: That it belonged to some Kanu oligarchs – so high that it could cut any deals, anywhere.

Soon, he built a multi-billion-shilling empire and back home in Uganda, he would splash his wealth for all to see. Once, when the roof of a primary school was blown away by the wind, he volunteered to build a new school but minus any publicity.

In Kenya, Mr Mugoya’s pot of gold was the National Social Security Fund (NSSF), a rich enclave where Kanu bigwigs had discovered a huge mountain of unused cash and all that was required was a creative way to squirrel away the loot.

There were reports that Mr Mugoya was connected to a State House baron, and was perhaps trying to ape Mexico’s wealthy civil engineer and tycoon, Juan Armando Hinojosa Cantu – the billionaire with a golden touch at winning government business.

The company had a record of over-pricing government contracts and featured prominently too in the Goldenberg scandal, the scheme hatched in 1990s by Kamlesh Pattni to steal money from government coffers through a fictitious diamond and gold export compensation. It is now known that Mugoya, the company, was used as the conduit in which Kanu financed its election campaigns.

Mugoya would get contracts even when it was the highest bidder. That is how it clinched the controversial Embakasi housing project in 1993 to ostensibly build some 5,000 units for Sh11 billion. But halfway through the job, it demanded more money.

Little is known about this man only that he attended Uganda’s Bulyansime Primary before joining Iganga Boys. He then joined the prestigious Kings College Budo before enrolling for an engineering course at the University of Nairobi. It is upon graduation that he teamed up with the son of a senior Kenyan politician and they started construction business. That is how he received his Kenyan identity card.

Records from the University of Nairobi indicate that Mr Mugoya graduated with a civil engineering degree on October 26, 1971 at a ceremony witnessed by President Jomo Kenyatta. He was registered as Abiam JM Isabirye in a class that had 46 students.

But after the January 26, 1971, Idi Amin coup, many Ugandans studying in Kenya opted to stay.

Uganda media say that due to his love for motorsports, he managed to elbow his way into Moi’s inner circle.

A few years ago, Uganda’s New Vision reported that Mugoya neither had a wife nor children but would house children from his family members in Nairobi.

The eldest in a family of four, he was also the most reserved. “Mugoya is still reserved and rarely likes special recognition in public … at family functions, the rich man shuns the high table and opts for odd jobs that make him inconspicuous.

There was a time he turned up at a party and started serving drinks like a waiter. This left him with little time to talk to people; something he cherishes,” the paper wrote, quoting a family member. He was serenely unruffled by such concerns.

Because of that, Mugoya remained elusive and was a highly private individual and would spend his time in Mombasa where he owned properties too.

One of the lucrative contracts that he secured was the building of NSSF headquarters in Nairobi and the Times Tower. In the latter, Mugoya was first given an excavation contract in 1991 which was later expanded to a building contract in 1992. It took Mugoya eight years to complete the Sh2.8 billion Times Tower.

One of his other companies was Kingoran Investment Limited where he was the sole director and which, at one time, created three debentures at Kenya Commercial Bank of Sh470 million in favour of Mugoya Construction and Stony Athi Limited. What that debenture meant was that Mugoya’s company had guaranteed his other company a debt of Sh1.65 billion.

A debenture is a type of debt instrument that is not secured by physical assets or collateral. It is usually backed only by the general creditworthiness and reputation of the issuer. That is how well-connected Mr Mugoya was with an astonishing circle of powerful men. But the riddle of who he really was and why he never appeared in public places grew into a kind of urban legend in certain circles.

It is only after the re-introduction of multi-party politics that Mr Mugoya’s name started featuring in the political debate. Even then, he never reared his head to defend himself.

In 2000, Mathira MP Matu Wamae asked a question everyone dreaded to ask. “Why do all construction jobs from the government go to Mugoya Construction and Engineering Limited … Is it because some individuals in the government are involved? We do not want to see Mugoya getting more contracts directly. Let them compete in an open tender,” he said.

But Mugoya was not used to compete for tenders and, slowly, he started losing out.

When he first appeared in court in 2007 to answer to some charges, the slack-jawed tycoon looked lost; like a man caught up in a web of deceit. He also looked different from the man that the media had derided as the evil spider behind the National Social Security Fund woes.

In Uganda, where he had set up a construction company, Mugoya had also targeted the country’s NSSF and convinced them to start a housing project at Nsimbe as a joint venture between his company and NSSF. Mugoya’s contribution of 840 acres of land was later found to have been overvalued after dubious negotiations by the country’s NSSF managing director and NSSF board chairperson, leading to a loss of $225 million.

While Mugoya was to be charged together with former Gender and Social Development Minister Zoe Bakoko Bakoru, former NSSF board chairman Onegi Obel and former NSSF managing director Leonard Mpuuma, only Obel and Mpuuma were charged. Bakoru fled and sought asylum in the US (she returned in February 2016) while Mugoya went under as his lawyers fought in court to stay execution of the arrest warrants granted by Justice Steven Kavuma.

It was, however, the Kingoran Investment Debenture that would finally bring down Mugoya company. What we know is that he had tried to evade repaying the KCB debt by arguing that since he was the sole director, he could not have entered into such a deal legally.

The court would be told that the debentures were not valid because the Kingoran Investment Limited had only one director who had no capacity to create the same.

But the judge would not hear such kind of argument.

“This case is in all fours … and all it means is that a debtor, who has executed debentures, charges and so on, and obtained monies, cannot be allowed to escape liability on allegations the documents so executed were invalid … I have looked at the documents in the instant case and I see no evidence to suggest that they are invalid. There is nothing wrong with the debentures and since the Bank has made a demand for payment which has not been honoured, the debentures have crystallised, and the Bank has a right to appoint a Receiver and Manager as it has done,” ruled the court.

While Mugoya had acknowledged the debt, he had started disposing of the company’s properties in a bid to reduce the liability of Mugoya to the Bank.

The court was told that Mr Mugoya had “embarked on wanton acts of destruction and stripping off the properties charged in favour of the Bank … the Director had stripped the Plaintiff Company of the moveable assets, plant, machinery and fixtures at the Embakasi Complex.”

A lawyer for the Bank submitted that Mr Mugoya was a fugitive, refusing to face the law until a warrant of arrest was issued against him.

Justice J. Lessit agreed and allowed the Bank to bring down Mugoya company. The winding up order was later issued by Justice F. Gikonyo in August 2015.

“I am aware that winding-up is a draconian step to take. But, in the circumstances of this case, with a lot of trepidation, the court will be forced to draw “the Sword of Damocles” upon the company as a matter of justice to the parties herein,” he said.

It was the end of a man who was well known in the corridors of power where he cut the best deals and whose company was the epicentre of brokers. That is how he could walk into a bank and get Sh1.6 billion that he wished not to repay.

And he did all that thanks to a secret Kenyan identity card.

Just read a back issue that carried the new Gatundu Hospital and some things came to mind.

Some 40 years ago, when I was in primary school, we were made to contribute every year towards the project. I don’t remember exactly how much. When I was 12, we travelled to Gatundu once to present songs and traditional dances as was the practice then.

We got back to Nairobi South B so late at night that we found anxious parents waiting in our school. When we got to our various homes, we got a beating for “coming home late”. Never mind the supervised trip was out of our control. Pleas that we had gone to entertain President Kenyatta fell on deaf ears.

I hated Gatundu after that. That hospital had no facilities! How do I know. My mother and my aunt (her sister) were both nurses. My mum worked at Kenyatta National Hospital, while my aunt and her husband, a clinical officer, worked at Gatundu.

I heard many conversations in which mum expressed shock at her sister’s description of the working environment. Obviously, I didn’t understand technical terms but I could tell there were dire constraints. I grew up wondering what happened to the money we raised. Esther Ngugi

Share thisFacebookTwitterPinterestEmailWhatsAppMugoya Construction and Engineering (Times Tower)Building Secret ID that allowed Ugandan tycoon free hand to loot Kenyan state firms dry No contractor will be as powerful as James Isabirye Mugoya – and now, thanks to the National Archives – we have evidence that the once-powerful and well-connected Ugandan actually walked around with a Kenyan