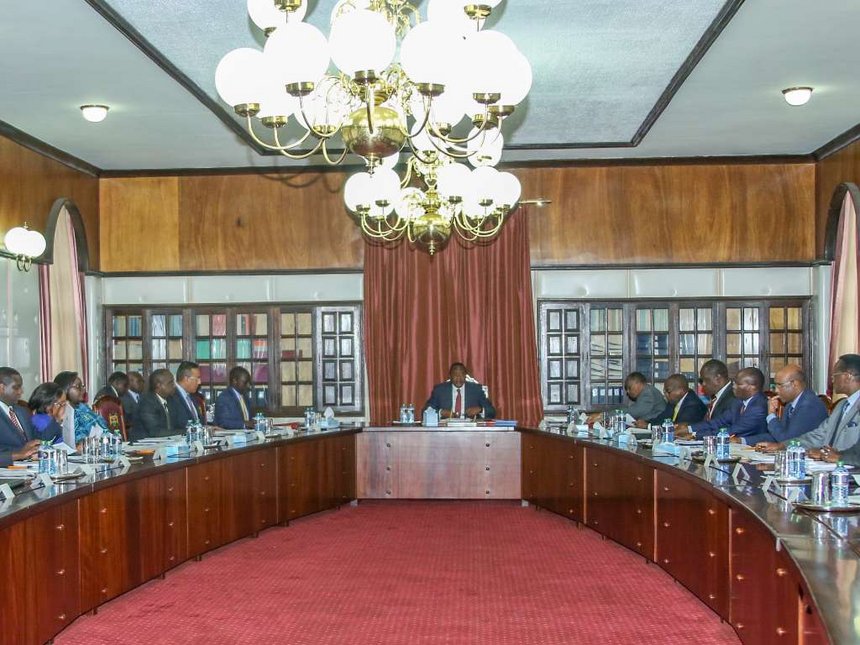 President Uhuru Kenyatta’s New Year’s announcement that he will soon send his 22 Cabinet nominees to Parliament for vetting has sent wagging tongues wagging even faster about who’s in and who’s out.

Uhuru said “in coming weeks” he would unveil his new administration to implement the Big Four and other transformative programmes.

“I will expect these men and women to serve Kenyans without partiality and with the very highest standard of integrity and efficiency. They must prove themselves worthy of Kenyans’ trust.”

That statement left many officials uneasy as they speculate about who will be axed. Many are said to be on the way out, yet aides to every CS that the Star interviewed expressed confidence their boss was solidly in.

Uhuru has listed food security, affordable housing, manufacturing and inexpensive healthcare as the Big Four his administration will focus on.

He intends create jobs for youth and transform Kenya economically, leaving a lasting legacy after his five-year tenure ends in August 2022.

During his first term, Uhuru’s administration was riddled with mega corruption scandals in which five Cabinet Secretaries and a number of PSs left government. Some ministers were mentioned in the EACC’s ‘List of Shame’ Uhuru tabled in Parliament in March 2015.

This time, Kenyatta wants to avoid economic scandals and the poor performance that dogged some ministries.

They were later joined by former Planning and Devolution PS Peter Mangiti who was sacked over the National Youth Service scandal.

According to State House sources, the President and DP Ruto are using performance in delivering the JP manifesto in deciding whom to sack and whom to retain.

Those whose dockets don’t earn at least 60 per cent will go. A quick review of the ministries reveals that none is safe from replacement or redeployment.

The ministry of Education under Fred Matiang’i faced challenges in implementing the laptops to all Class One students within the first 100 days and afterwards.

Some unsatisfied bidders challenged the tender for supply and it was not until 2016 that digital learning programme kicked off.

Matiang’i, who took over the ministry in 2015 from now Lands CS Jacob Kaimenyi, has played a key role in reforming and restoring quality to primary, secondary and higher institutions of learning.

His leadership was tested by an epidemic of fire in secondary schools that led to widespread destruction of property, as the sector grappled with student indiscipline and disgruntlement.

Kaimenyi’s tenure at Lands has witnessed ups and downs, ranging from fighting cartels to the issuing title deeds to squatters and automating services.

CS Hassan Wario of Sports, Culture and Arts has the Rio de Janeiro Olympic Games debacle and the much-touted five stadiums hanging around his neck. The five years were marked with acute squabbles among sports associations.

Joe Mucheru and Charles Keter leading the ministries of Information and Technology and Energy and Petroleum respectively have had rather peaceful terms in office.

Mohamed Adan headed the Ministry of Industrialization and Enterprise Development.

He prides on ratings of the country as one of the best destination to start a business and the ease of doing business in Kenya.

Phylis Kandie of Ministry of Labour and East African Affairs, on the other hand, has had the good and the bad in equal measure.

The strikes among the civil servants in the past years have been her main challenges.

Under the leadership of Anne Waiguru (currently Kirinyaga governor), the Devolution Ministry was engulfed with Sh791 million NYS scandal, but the EACC later cleared her from any wrongdoing in the scam.

Former Laikipia East MP Mwangi Kiunjuri was appointed to head the Devolution docket after Waiguru bolted out, over what she termed as ‘tremendous external pressure and on doctor’s orders to take on lighter duties”.

He was charged with two counts of abuse of office and failure to comply with the procedures and guidelines relating to the management of public funds in 2015.

Uhuru replaced Kamau with the then Health CS James Macharia.

Macharia says that since 2013, the ministry has performed excellently in improving roads, railway, aviation and seaports infrastructure.

“For any shilling or dollar that has been invested, there will be a big return. For example, with the completion of the SGR, we anticipate it will enhance the GDP of this country by about 1.5 up to 2.5 per cent, which means it will pay for itself,” Macharia said.

CS for EnvironmenJudi Wakhungubanned the use, manufacture and importation of all plastic bags used for commercial and household packaging.

The ministry noted that any person who contravenes the provision of the gazette notice shall be liable to a fine of not less than Sh2 million and a maximum of Sh4 million, or in default serve a jail term of one year but not less than two years.

This was after 36 Kenyans were massacred by suspected al Shabaab militants in Mandera.

Nkaissery served diligently and boldly in the docket until last year when he died.

After consultation with the National Security Council members, Uhuru appointed Matiang’i to take over the Interior docket.

In April 2015, the Ministry of Environment Water and Natural Resources was split to create an additional ministry – Water and Irrigation. Former Saboti MP Eugene Wamalwa was appointed to head the ministry.