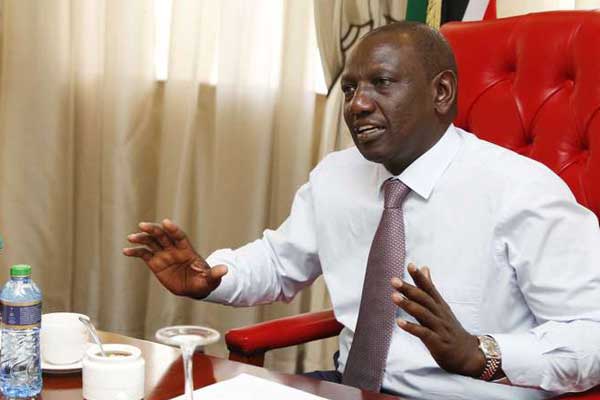 The cold war between supporters of Deputy President William Ruto and a group of influential people they accuse of trying to undermine his presidential ambitions has burst into the open, with Rift Valley MPs alleging a well-organised scheme to tame their man.

The handshake between President Uhuru Kenyatta and opposition leader Raila Odinga, a push for constitutional change that might fundamentally affect the 2022 race, and claims of a powerful clique of operatives working against him, have this week exposed the undercurrent silently, but viciously, against Mr Ruto’s State House race.

Mr Ruto’s allies claim that a clique of powerful businessmen and State officials, some of whom have supported President Kenyatta’s political journey since 1997 when he first campaigned for the Gatundu South parliamentary seat, are working behind the scenes to “cut the DP to size”.

Multiple confidential interviews by the Sunday Nation have brought to the fore allegations that the coming together of the influential individuals, including those who ironically tried to use the same strategy to block Mr Kenyatta’s 2013 bid in favour of Mr Musalia Mudavadi, is coordinated by a secretariat in Nairobi run by a publicity shy but respected Kibaki-era civil servant.

The group is being credited with being behind the March 9 handshake between President Kenyatta and Mr Odinga and also the push for constitutional change – two things seen to be sidelining, if not outright weakening, Mr Ruto’s presidential ambitions.

“We have been monitoring events as they unfold. It will be premature to engage politically at this moment, but saying ‘no’ to any referendum proposal is a way of sending a message that we are prepared for a brutal phase ahead,” said an MP from the Rift Valley, who requested anonymity.

The thinking within this secretariat, an MP close to the DP and aware of the gigantic power of the team said, is to force events and elicit strong reaction from Mr Ruto and his allies.

Nyeri Town MP Ngunjiri Wambugu, who has previously been vocal on Mr Ruto’s candidature, admitted the existence of such a team, but dismissed the notion that it was set up expressly to block Mr Ruto’s ascendancy to the presidency. He instead said the aim was to ensure there is a strong running mate for Mr Ruto in 2022.

“Rift Valley leaders would rather have a malleable Mt Kenya person to be Ruto’s ‘partner’; someone they ‘own’. This will allow them to manage him and basically do whatever they want, without being checked. That is the problem. In 2012, Rift Valley said their man is Ruto, why is it then Ruto wants to choose his running mate without the input of the community?” asked Mr Ngunjiri, alluding to the assumption that Mr Ruto’s 2022 presidential ticket will have someone from the Mt Kenya region.

Acknowledging the odds stacked against the DP, Tharaka-Nithi governor Muthomi Njuki said the pressure, and the many battles he is facing might in fact work in Mr Ruto’s favour.

“The fundamental question right now is: Can the DP defend himself against all these people? Can he absorb the shocks and the undertones of propaganda, and survive? The answer is yes,” Mr Njuki told the Sunday Nation.

He explained: “My biggest worry, actually, is when the DP is in this race with no pressure at all. He works well under pressure. He is the kind of person that will be told that some place is dangerous because some politicians do not like him there, and he will choose that place, and forego those that are already intact, just to thrive in the pressure.”

The thinking in the Ruto camp, the Sunday Nation established, is that while there is a genuine cause for worry with the Kenyatta, Moi and Odinga dynasties getting increasingly cosy with each other at his expense, it is the DP’s mien, and own hard work, that might endear him to the people.

“There are political cannibals on the loose. We know them. They want to use the President’s name to hatch an evil scheme to try and block Ruto like they tried, and failed badly, with Moi in 1978, and Uhuru in 2013, where some State operatives were involved. We will triumph over them,” he said.

Yesterday, Mr Ruto spoke about the concerns of a divided Jubilee Party. Speaking in Olenguruone, Nakuru County, Mr Ruto dismissed such concerns, saying all leaders should heed President Kenyatta’s command for development-oriented discussions, and not politics.

“Jubilee is united and ready to work for Kenyans who elected us. Those claiming there are camps in Jubilee are day-dreamers. We do not have time for divisive and tribal politics,” he said and urged his supporters not be worried about the future “as all plans will remain as planned”.

But while Mr Ruto might trust that his boss means well, it is the powerful team, the resources, and the addition of the Odinga and Moi families to the equation that have incensed the man from Sugoi. Baringo Senator Gideon Moi has particularly ill-disguised his presidential ambitions.

Besides the secretariat, one that Nairobi Governor Mike Sonko alluded to two months ago, saying they were holding night meetings, Mr Ruto is in a  political battle with Mr Odinga on whether or not the Constitution should be changed.

“Those opposed to the referendum question should know that it is going to be the 2022 question, and the earlier they learn the better,” Cherang’any MP Joshua Kutuny told the Sunday Nation.

According to Mr Kutuny, the DP’s strategists are losing focus by opposing the referendum bid, and “creating enemies”.

This, he argued, required a change of strategy—coupled with the fact that by Mr Odinga joining Jubilee, the “common enemy” figure he had taken in uniting them had disappeared, hence a different tactic should be involved.

But while arguing that such attempts were possible, Murang’a senator Irungu Kangata termed those leading the scheme as “self-seekers who won’t amount to anything”.

Vocal Lamu politician Rishad Amana urged Mr Ruto not to be apprehensive that the Uhuru-Raila partnership.

On Thursday, in an unusual remark tweeted by State House spokesman Manoah Esipisu, President Kenyatta went for central Kenya governors – Mwangi wa Iria (Murang’a) and Ferdinand Waititu of Kiambu and Nairobi’s Mike Sonko who he said were focused on 2022.

Ruto allies tell of scheme to block DP’s bid for presidency Reviewed by samrack on April 29, 2018 .

Ruto allies tell of scheme to block DP’s bid for presidency The cold war between supporters of Deputy President William Ruto and a group of influential people they accuse of trying to undermine his presidential ambitions has burst into the open, with Rift Valley MPs alleging a well-organised scheme to tame their man. The handshake