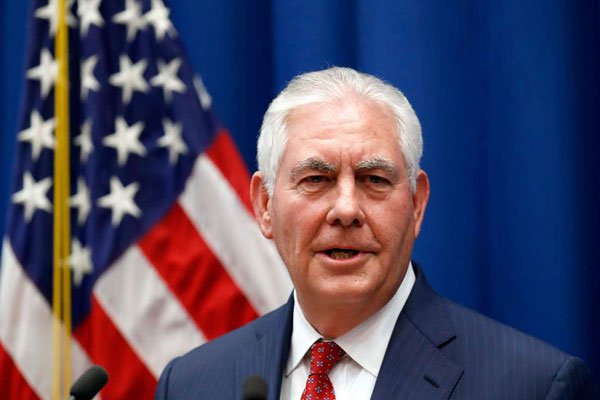 US Secretary of State Rex Tillerson. He is expected to hold talks with President Uhuru Kenyatta in Nairobi later this week. FILE PHOTO | ALEX BRANDON | AFP

US Secretary of State Rex Tillerson mourned the victims of the 1998 embassy bombings and lauded today’s Kenya as a “thriving country” in a speech on Tuesday hours before the start of his week-long Africa safari.

The attacks on the US embassies in Nairobi and Dar es Salaam 20 years ago this August prefigured an era of terrorism in Africa, Mr Tillerson said.

“Since that day, thousands more have died at the hands of terrorists in Africa,” the top US diplomat told listeners at a university in the state of Virginia.

Terror attacks in Africa have claimed more than 1,500 lives in each of the past three years, Mr Tillerson said.

He pledged to continue US support for counter-terrorism campaigns in Somalia and some other countries in the sub-Saharan region.“The AU Mission in Somalia — or Amisom — includes troops from five African countries, stabilising areas under attack from Al-Shabaab and permitting much needed aid to reach the Somali people,” Mr Tillerson said.

Separately, a State Department official told the Nation that stepped-up US air strikes in tandem with Amisom and Somali government attacks are inflicting damage on Al-Shabaab.

“Military operations are having some success in weakening the group while creating space for the Somalis to undertake the political reconciliation and economic reform necessary to defeat the forces of extremism over the longer term,” the US official wrote in response to a Nation query about the status of the Somali insurgency.

At the same time, “Al-Shabaab continues to conduct brutal attacks against civilian and military targets throughout Somalia,” the State Department official acknowledged.

In his speech on Tuesday at George Mason University, Mr Tillerson said the US has “a longstanding partnership with Kenya.”

He described Kenya as “a large, thriving country” where the US anti-Aids programme, known as Pepfar, has achieved “its greatest success.”

Kenya has also served as “an incubator for how we expanded Pepfar over the years,” Mr Tillerson said.

The programme has saved more than a million lives in Kenya through a total infusion of $5.5 billion in anti-Aids treatments and services during the past 15 years.

Mr Tillerson did not include Kenya, however, among the countries to benefit from a $533 million US famine-prevention initiative he announced on Tuesday.

The funding will go to Somalia, South Sudan, Ethiopia and unnamed countries in the Lake Chad Basin.

Mr Tillerson also did not comment on Foreign Affairs Principal Secretary Macharia Kamau’s dismissal of a suggestion that the US could help negotiate a political truce between the Kenyan government and the Nasa opposition.

The secretary of state likewise made no mention of his reported intention to hold talks in Nairobi later this week with President Uhuru Kenyatta but not with Nasa leader Raila Odinga.

Rex Tillerson mourns and lauds Kenya on eve of Africa visit Reviewed by samrack on March 7, 2018 .