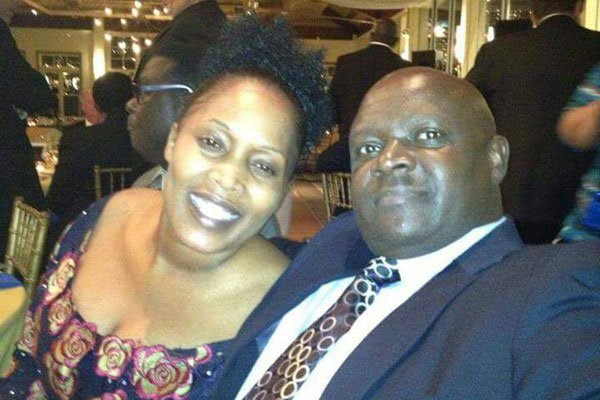 Mr Henry Okong’o and his wife Lydia at a past wedding party. PHOTO | COURTESY

Kenyans in New Jersey are reeling from shock after a Kenyan couple was found dead in their home.

Mr Henry Okong’o and his wife Lydiah had gunshot wounds when they were found in separate rooms of their country village home on Monday morning.

They were pronounced dead at the scene.

The couple has been living in the 2 Mina Drive property for over a decade and neighbours are still confounded by the incident because, according to them, the Okong’os seemed “happy”.

“Three children have been left without parents. This is so sad,” one neighbour was quoted by the local press as saying.

Reports in local press indicate that authorities in Jersey City, New Jersey, are investigating a murder-suicide.

It is reported that the discovery was made before 9am and it is unclear who was responsible for the deadly gunfire.

However, some Kenyans in Jersey City, especially those who knew the couple, suspect the deaths could have been as a result of domestic violence.

They suspect Mr Okong’o might have shot his wife and then turned the gun on himself.

“Most of us who knew the couple very well know that they have had a tough marriage,” Said Dr George Omburo, one of the SDA church elders.

“They quarrelled a lot and they would separate for long periods only to come together again.”

Dr Omburo said neighbours reported to have heard a quarrel emanating from the house on Sunday night.

She advised couples facing difficulties in their marriages and relationships to seek help from her organisation.

“The situation can be deescalated through a professional approach which is readily available. Any couple affected should not shy away from getting help before it is too late,” she said.

The Hudson County Prosecutor’s Office, which had not released any information on their investigations by the time of going to press, remained at the scene until late Monday.

Homicide detectives could be seen sifting through the mailboxes at the Sycamore Road residence.

Neighbours gathering around the home described the Okong’o s as “lovely people” who kept their home well maintained.

Neighbours, who asked not to be named for personal reasons, said Lydiah was employed as a nurse while Mr Okongo owned a few Laundromats.

He is listed as the owner of both 2 Mina Drive, a corner house, and 120 Sycamore Road, which stands just behind the other home on the opposite corner.

Hundreds of residents rallied him and helped save his business in 2013 when his lease was up and had defaulted on rent payments.

A family member discovered the bodies and the couple’s children are believed to have been inside the home when the gunfire erupted.

The incident comes two months after another Kenyan, Ms Patricia Miswa, was found dead in her room in the US.

Patricia left Kenya in 2017 to pursue a master’s in Creative Writing at University of Minnesota.

A week before her death, her mother reportedly tried calling her but she did not answer.

The mother later called the hostel room management who, together with the police, discovered Patricia’s lifeless body inside her room.